Recycling had nothing to do with environmental concerns back in the day, it was a good business move. In this case, food cans from local hospitals became the first containers in the nursery industry.

Share
Tweet
Mail
Gord Shuttleworth received one of the highest honours with the presentation of the Landscape Ontario Honorary Life Membership at Congress 2013. The event was emotional for the nearly 70-year-old Shuttleworth, as he looked back over a lifetime spent in the horticulture world.

Shuttleworth is an industry pioneer, past president of Landscape Ontario, innovator, inventor, and to many who know him, a good guy. The honour was presented by another life member and past president (1979) Karl Stensson.
“Gord is one of a long line of leaders who have influenced others through their principles, values, ethics and activities,” said Stensson.

Tony DiGiovanni, executive director of Landscape Ontario, says, “There is a saying, ‘We can see further because we stand on the shoulders of giants.’ Gord is one of those giants. He has been instrumental in the success of our association. He was one of the master masons who laid a solid and stable foundation that we still enjoy.”

Gord Shuttleworth has vivid memories of his time when he began working in the industry. He was literally born into it, while his mother and father Gladys and Ted Shuttleworth began their year-round business, Little Tree Farm Garden Centre in London, back in 1952. They raised a family of five children, while operating the growing business.

It was the first indoor garden centre for Canada, and grew into one of the largest in the country. It was soon followed by Cullen Gardens. “Back in those days, people didn’t decorate the outside of their homes like today,” says Shuttleworth. “Everyone from across Canada came to see our garden centre.” 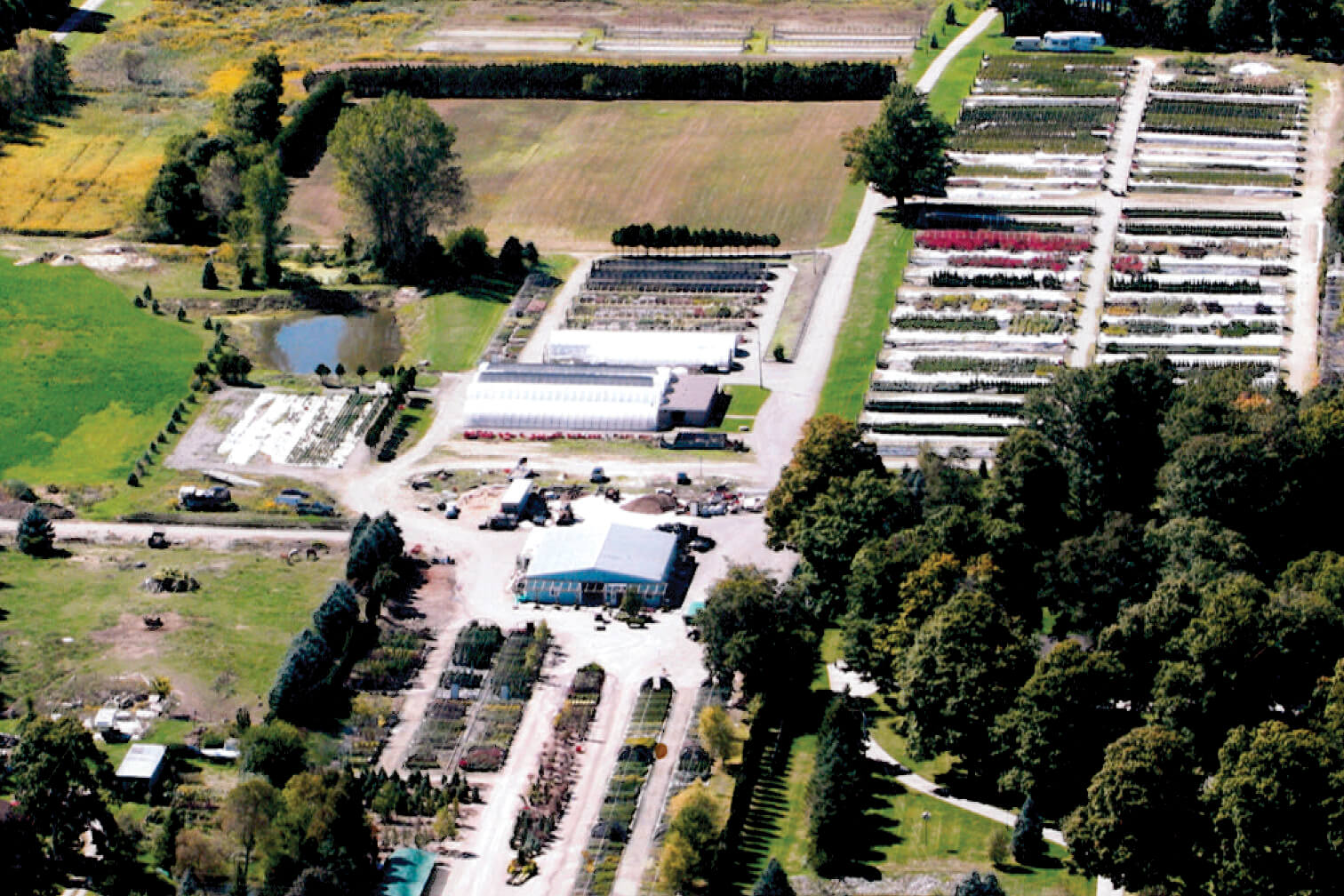 Shuttleworth’s Delaware Nurseries near London, Ont. Although Little Tree Farm no longer exists, a couple of years ago Shuttleworth preserved the memory of his parents, and the history of the store that was a London institution for more than half a century. A plaque and a tree now honour that memory at the new medical building on Springbank Drive, where the Little Tree Farm once called home.

At the age of 16 he worked as a driver for his father. After completing one year at the University of Western Ontario, Shuttleworth began working full-time for his parents. In 1968, Gord and his brother David bought Little Tree Farm from their parents.

“During that year, I also began Delaware Nursery with my mom and dad. It was a growing operation of 56 acres, where we supplied container grown plant material for garden centres and landscape contractors.”

At this time, growing in containers was a major innovation for the nursery industry. Gord found that hospitals used five gallon metal cans that contained puréed food. He would go around to area hospitals and retrieve the empty containers, which proved ideal for the first container-grown nursery stock. Drain holes would be punched into the cans.

Later, tarpaper was rolled and stapled to create another type of container. “We would cover them with sawdust in the winter, as we didn’t have polyhouses in those days,” says Shuttleworth.

Another first that the family developed was concrete patio stones. “We began the production of the slabs to give our employees work throughout the winter,” says Shuttleworth. It soon took off, and Little Tree Farm was shipping patio stones all over south-western Ontario. “This was long before interlock stones.” 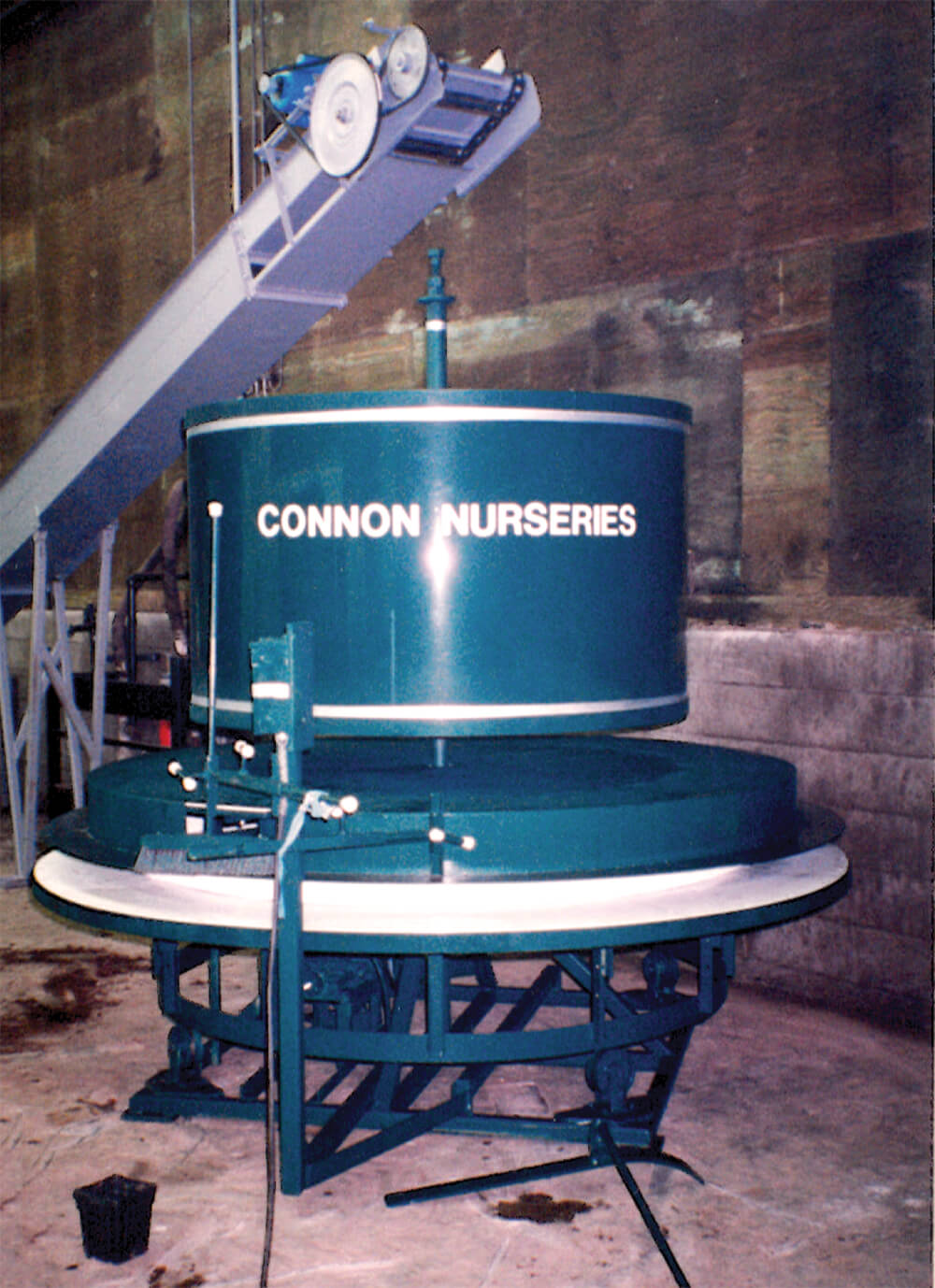 The ShuttlePotter was designed and built by Gord Shuttleworth and his father Ted to speed up the planting process for nursery growers. Manufacturing rights are now owned by Connon Nurseries/NVK.

The list of accomplishments of the inventive family includes an automated potting machine for the nursery industry. In 1988, Shuttleworth and his father developed the ShuttlePotter. “This device allowed nurseries to reduce staff and improve production potting time up to 400 per cent,” says Shuttleworth.

The centre drum of the potting machine is filled with the soil mix, which is then fed into the pots on a rotating base. The machine can handle pots ranging in size from one to 10 gallons, with up to four people handling the entire operation.

Twenty-five machines were built by Gord Shuttleworth and sold across Canada and to the U.S. One of those customers was Neil Vanderkruk at Connon Nurseries/NVK in Waterdown. “Neil was a mentor to me, and someone whose opinion I greatly admired,” says Shuttleworth.

“Gord was both a good friend personally and professionally,” says Vanderkruk, himself a past president of Landscape Ontario. “He really helped our industry, and together we were involved in a number of projects.”

When Vanderkruk bought the first unit, Gord Shuttleworth knew he had a winner. Neil Vanderkruk thought so much of the device that he purchased the rights to the machine in 2008.

“It’s an excellent system, we use it at Connon, and find it a very efficient machine,” says Vanderkruk. Connon Nurseries/NVK continues to manufacture and sell the ShuttlePotter.

Back in January, Gord Shuttleworth was taken by surprise at Congress awards night when his name was called to receive the life membership award. “I had no idea that’s why everyone was encouraging me to attend. I thought it was a past presidents’ event to mark the association’s 40th anniversary.”

Bob Allen, another former president of LO (1985), was responsible to ensure Gord Shuttleworth attended the awards ceremony, but did not know he was to take centre stage. “We managed to convince him to attend. When his name was called, he was completely surprised.”

Allen says the honour for Gord Shuttleworth is well-deserved. “He contributed a lot to both the industry and the association.”

Shuttleworth knew the real reason he had been encouraged to attend the award event, when his name was announced to the 600-plus in attendance, “Landscape Ontario is proud to recognize Gord Shuttleworth for a lifetime of service and contribution to the nursery and landscape industry.” On stage was Karl Stensson, president of Sheridan Nurseries, who presented the special plaque to LO’s newest honorary life member and Tony DiGiovanni. 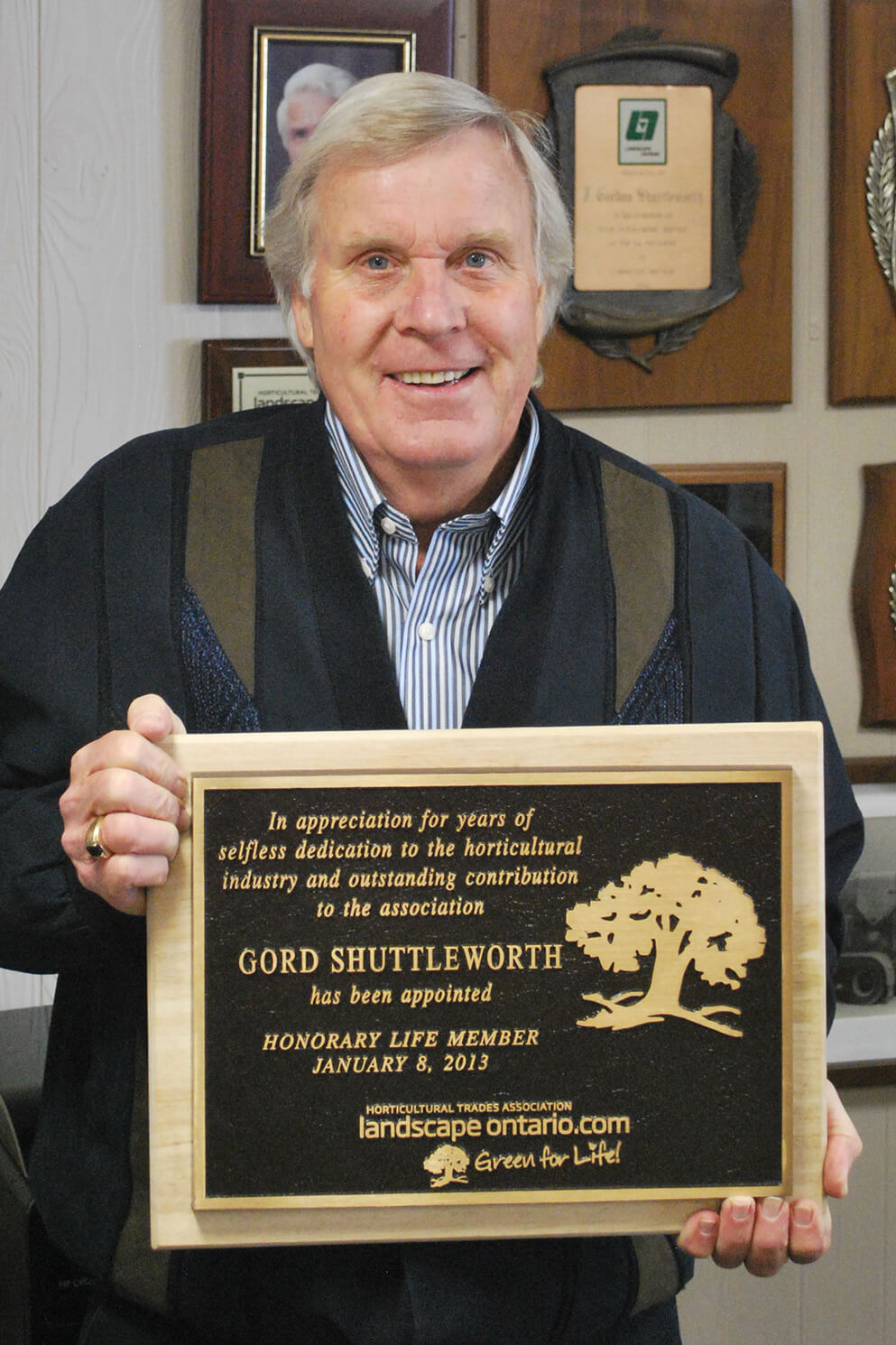 Gord Shuttleworth is proud of his honorary life membership from Landscape Ontario.

First appointed to the provincial board of Landscape Ontario in 1974, Shuttleworth was named chair of Congress in 1975. In 1976 he was elected as the fourth president of LO, and continued the position when he was re-elected for another term in 1978. He became president of the London Chapter in 1982.

Karl Stensson shared a great story about Gord Shuttleworth during the 25th anniversary year of Congress.

“During our past presidents’ meeting, Gord came with about 15 full-head masks of an ‘old man’ (photograph in the 25th anniversary yearbook).

“All the past presidents donned them at one time or another and interrupted various events during the show. Because there were so many of us showing up at different times and places, nobody could figure out who the ‘person’ was. For instance, at one point everyone said it was Casey van Maris, so at the next event we made sure Casey was not in the mask but near the masked person.

“At the annual banquet at the end of the Congress, one by one we all came out from behind curtains, every door into the ballroom, etc. We all made our way to the stage through the crowd (in those days about 500 attended the banquet) and then took them off. It was hilarious and a prank which lasted for the full three days without anyone getting caught.”

Following his term of office with LO provincial board in 1980, Gord Shuttleworth moved on to the board of directors of the Canadian Nursery Trades Association. He was elected president of the national association in 1993, serving a two-year term.

After 22 years of volunteer service with the provincial and national associations, Gord Shuttleworth stepped away to focus on his business, Delaware Nursery. He closed the nursery in 2011, trying his hand at semi-retirement. “I have about 20 hoop houses in use today — down from a one-time 120 — where I grow mostly boxwood. I sell to about 20 of my long-term wholesalers. It’s a self-serve system, they come in, pick up their plants, write the bill and leave it in the office.”

Shuttleworth says it’s fun going back full circle to working with his hands, just like it was back in the late ‘60s. “I’m enjoying life, caring for the remaining nursery inventory, trimming, weeding, fertilizing and shipping. With less stress, I’m taking time for my grandchildren.”

Gord Shuttleworth continues to be actively involved in Landscape Ontario attending London Chapter meetings and helping the Chapter with governance issues. “He is a person that others listen to. He will still send an email or make a phone call when he has something to contribute,” says DiGiovanni.

Gord Shuttleworth gives credit to his family, staff and the dedicated board of directors. “Their support meant everything to me over the years.”