One surface can absorb a year’s worth of rainfall within an hour. Another serves as a repository for indigenous plants that can stand up to pedestrian and vehicular traffic. Yet another won the prestigious Red Dot Award, combining artistic flair with a surface that’s 30 per cent porous.

The timing for these innovations couldn’t be better considering cities across Canada are struggling with higher incidence of flooding, loss of biodiversity and the heat sink phenomena. These are challenges landscape professionals are uniquely positioned to address.

The municipal mindset with respect to water management used to be that hard surfaces were a good thing, because they helped to expedite the movement of rainfall into the storm drain system. Now, with climate change, what were once considered “100 year storms” are happening every few years. These severe weather events cause major problems in cities, including: sewage overflow into nearby lakes and streams, water pollution in the form of oils and chemicals originating from residential driveways, and downstream erosion caused by the sheer volume of runoff.


All politics is local

Responding to these challenges, Vancouver, B.C., has developed a comprehensive “Rain City Strategy” that includes an arsenal of solutions designed to keep water onsite in both public and private settings, including bioretention rain gardens, green roofs and permeable pavement.

A few years back, the City of Kitchener, Ont., conducted an in-depth permeable pavement study and it is now in the midst of launching a program designed to ramp-up residential interest in keeping water on the home front. Plans are underway for financial incentives for residents to switch from hard to permeable paving surfaces and additional measures, such as rain barrel usage, are part of the mix as well.

Ottawa, Ont., is even further along the process with its “Rain Ready Ottawa” program, that includes a subsidy of up to $5,000 per household to help cover the cost of various residential rainwater retention measures — including — you guessed it, permeable paving.

“The city has already received dozens of requests from residents ahead of the launch… with many expressing interest in permeable paving,” says program coordinator Simon Greenland-Smith, adding this demand came “before any outreach or promotional efforts have been made.”

PurePave, for example, can absorb a year’s worth of rainfall within an hour — a feat made possible by combining natural granite aggregate with a proprietary polymer binding agent. PurePave Technologies, based in Ottawa, Ont., says the surface of PurePave is 23 per cent porous and can absorb over 4,000 litres of water per square foot per hour.

Based on studies conducted by the University of Ottawa in 2019, it was determined to have a flexural strength of 6.1 MPa that was maintained even after a 40-cycle freeze thaw test (going from -40 to +40 C). In layman’s terms, approximately six times the strength of asphalt, which goes from 2.8 MPa to less than 1 after the same type of testing. 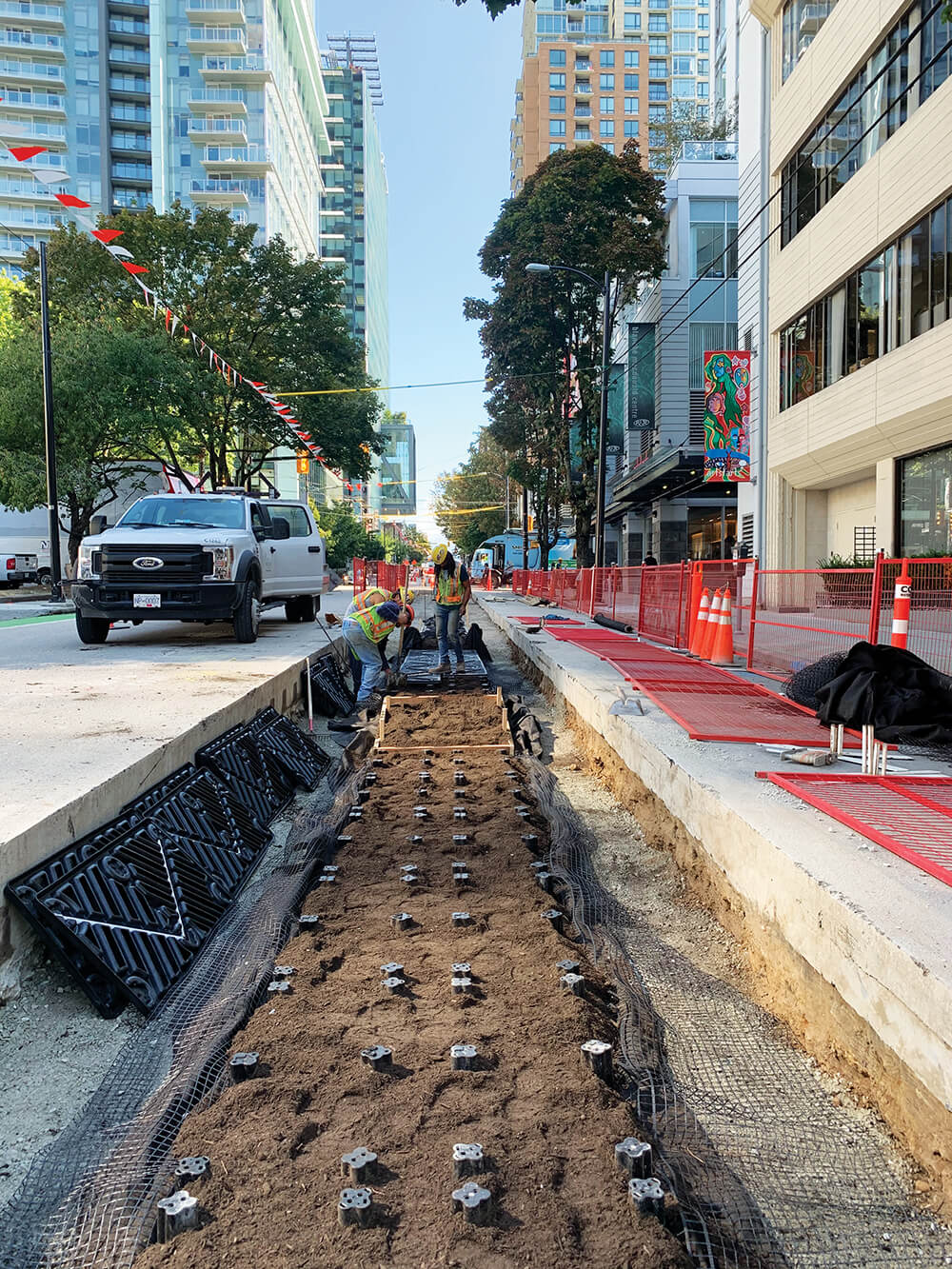 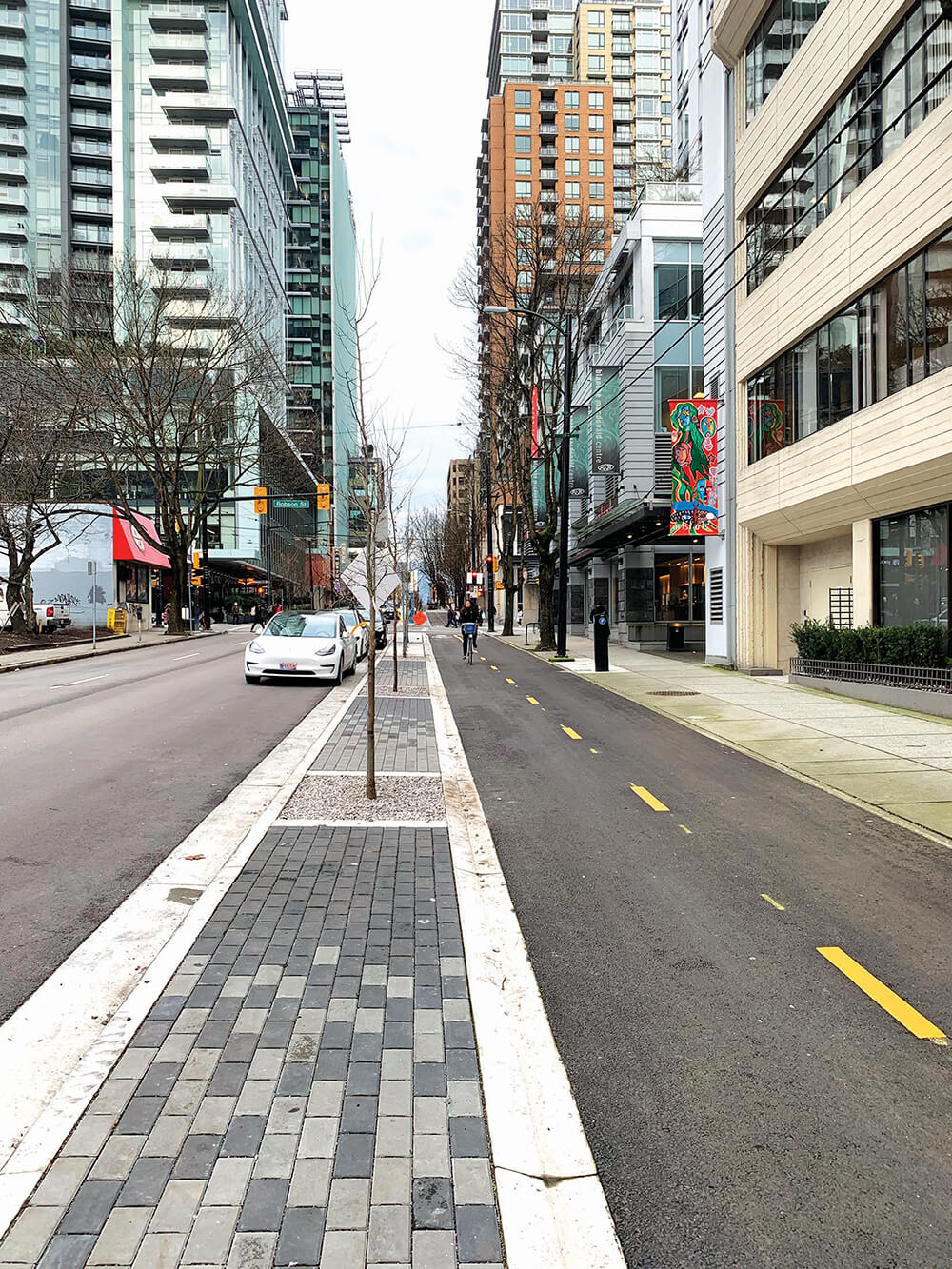 Before and after the installation of permeable pavers by the City of Vancouver on Richards Street.

With that type of porosity, one might question how long it takes for the surface openings to become clogged. However, PurePave CEO Taylor Davis says based on their decade of development and five year history of manufacturing surfaces for contractors, they’ve “found that walkways basically never get clogged. And for driveways, we just recommend a power wash in the spring at the bottom of the curb where the vehicles are entering and exiting.”

Davis says the relatively low maintenance approach is due to the fact the entire PurePave surface infiltrates water, in contrast to just the cracks in between permeable paving stones or concrete blocks

The tendency of conventional permeable pavers to lose their porosity over time is confirmed by Tim Van Seters, the senior manager of the Toronto Region Conservation Authority’s (TRCA) sustainable technologies evaluation program. His group has been studying interlocking pavers, with joints ranging from four to 12 per cent open space. Their research shows a 45 per cent average volume reduction over five years.

“Joints clog more and more, and then eventually you will get runoff from the surface,” Davis explains. “That’s what you want to avoid because the whole point of permeable paving, is it has got to be permeable.”

Apart from resin bonded aggregate surfaces such as PurePave’s, there are of course other more permeable surfaces, such as the Aqua Storm paver from Tech Bloc, favoured by Jonas Spring, owner of Toronto-based landscape and gardening company Ecoman. Spring likes the product because its large open spaces allow for ample plant material.

Spring is in the process of developing what he calls a “hardscape plants palette” that is “designed to push the boundaries of what is possible in paving design.” His goal is to utilize a variety of plant species — one grouping is a “high traffic mix” for accents, borders, banding and driveways, and another “low traffic mix” to be used for design and decorative purposes.

Concerned by what he describes as “the cementing of the planet,” which includes shrinking gardens and greenspaces, Spring says “the best defense is a good offense. So what we do is provide tools for integrating plants into hardscape infrastructure, which can have big picture implications.”


Innovations from across the pond

The desire to re-green traditionally hardscaped urban settings such as driveways and parking lots isn’t confined to Canada. In Eindhoven, Netherlands, Rain Away designer and founder Fien Dekker has developed a new line of permeable paving, including Flood Bold, a concrete tile which is inspired by the way nature is integrated into Japanese architecture. The unique shape, not unlike Acqua Storm, is designed to accommodate grass and other plant material while being strong enough to be driven over. It was recently feted with the Red Dot Award for Product Design. 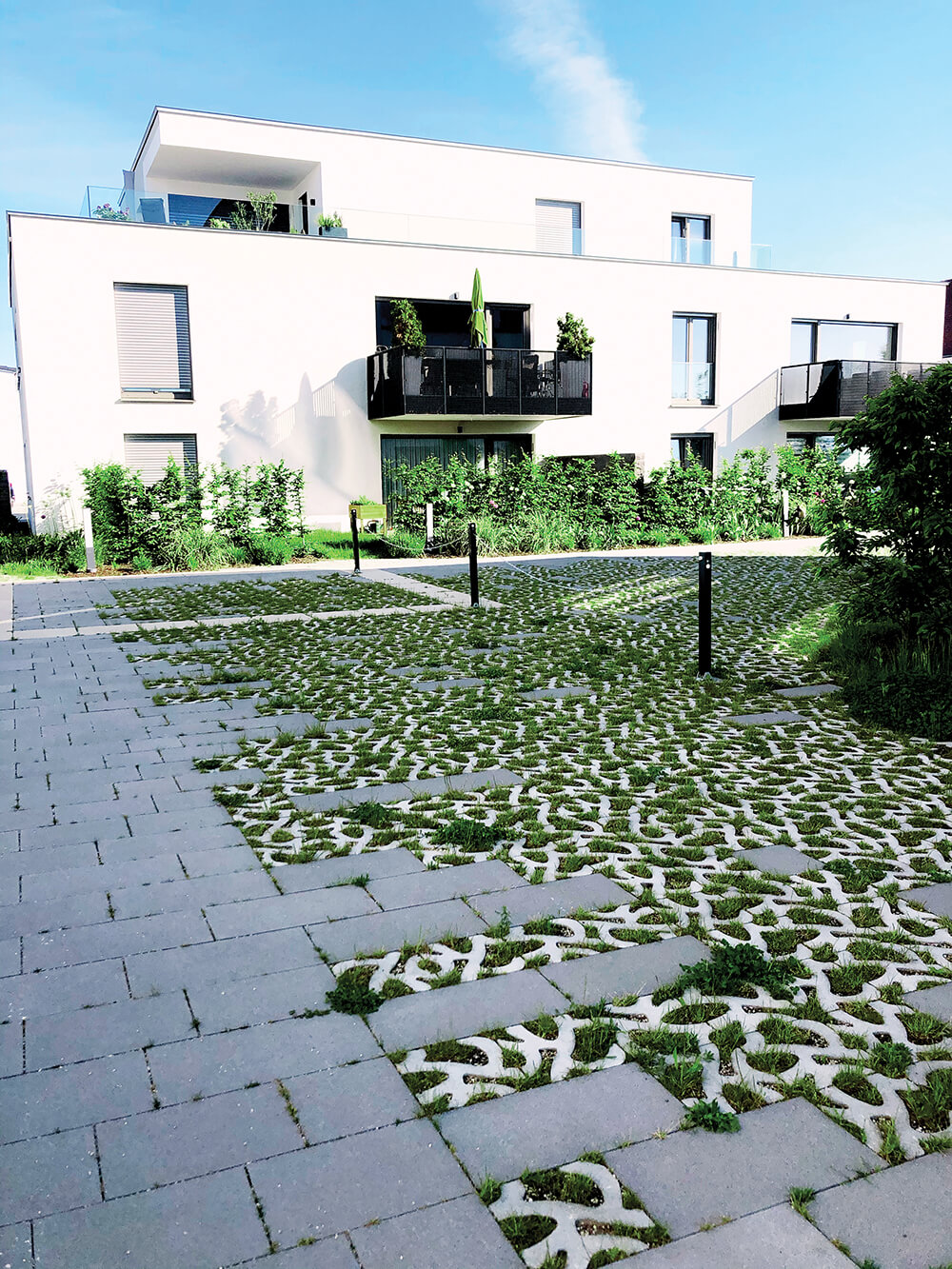 Rain Away permeable pavers utilized for a residential driveway.
“In the Netherlands, 10 per cent of our public space is for parking,” says Dekker. So this is where we really focus our efforts to make cities greener.”

To make that happen, the visual appeal of the Flood Bold product is what gets both landscape architects and end users interested in the product in the first place. But it’s their systematic approach to ensuring plant material will survive that wins everyone over.

“We’ve created a foundation that’s built up in two layers. The first layer is all about nutrients and having soil that enables grass to grow well,” says Dekker. “And the grass we use is especially suited for surfaces you can drive over. And the aggregate material we use under that is more open.”

Dekker says this multilayered approach (ranging from 30-60 cm depending on the site) enables the grass to grow deeper roots and retain more moisture, helping to make the grass more drought-resistant and more quickly absorb rainwater. Dekker says Flood Bold is capable of buffering up to 400 litres of water per cubic metre, with the ability to connect rainwater drainage systems to the lower layer.


Plants in the driveway

Back in Toronto, Spring is in the process of working with a growing partner to cultivate a variety of plant species that thrive in hardscapes and permeable pavements. Examples include the spiked green carex eburnea and the white petalled wild strawberry fragaria virginiana. Spring hopes to spark a trend where designers and architects will look closer at how they can bring plants into their paved and permeable spaces.

“So for instance, if you’re doing a driveway and you have a footprint for where the tires go, but want to have plants in between them, then you can just drop (the plants in),” says Spring.

Meanwhile Dekker, in her quest to constantly redesign hardscaped surfaces, continues to develop new products that can be mixed and matched, including what’s called the Flood Permeable tile that boasts a raised pattern over a solid base that temporarily traps the water, before allowing it to percolate through. “It’s not meant for walking on,” Dekker explains. “It’s just meant to show how beautiful rainwater can be, almost like an art piece for rainwater.”
There’s also an interesting synergy occurring on the Fusion Landscape front via-a-vis some of the municipally driven programs underway. For instance “landscape professionals interested in getting involved in Rain Ready Ottawa can enroll in Fusion Landscaping Professional training through Landscape Ontario,” notes Greenland-Smith.

Greeland-Smith says the program focuses on best practices for hardscaping and softscaping that promotes rainwater infiltration and emphasizes beautiful and functional landscapes. Including of course, innovative approaches to the best possible use of permeable paving.

This article is the first in a new series on sustainable landscaping from Collingwood, Ont.-based journalist Mark Douglas Wessel. See more of Mark’s writing at: www.markdouglaswessel.com