If a name did not matter, then we would be selling plants under their trial numbers. “Would you like a #233 ash to go with your #717 spirea, or perhaps a #534 potentilla?” The Canadian Artist Series of roses is not only an outstanding series, but the names attract notable press coverage and stronger sales. ‘Emily Carr’, ‘Bill Reid’ and ‘Felix Leclerc’ are the roses released so far; these cover the colours of red, yellow and pink. This year’s release encompasses all of these in a tri-coloured rose, aptly named ‘Campfire’. 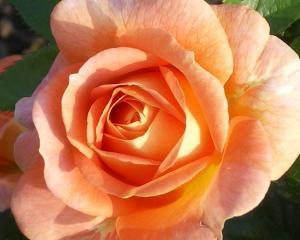 ‘Campfire’ is the name of a Tom Thomson painting from 1916.  Thomson was an honorary member of The Group of Seven, Canada’s best known group of painters. He died in 1917, the year prior to the formation of The Group of Seven, but his influence was often credited with its formation.  The Group brought the beauty of Canada’s landscape to the world’s attention.  ‘Campfire’, oil on wood, was one of Thomson’s last paintings.  He died in 1917, under suspicious circumstances.

The colours chosen by Thomson for his painting flourish in this rose. The yellows, reds and pinks are presented in differing combinations as the bloom progresses from the bud stage to fully opened. During the growing season, all three colours are represented, as the shrub retains spent blooms as new buds emerge. It is referred to as a continuous bloomer. Bud onset begins in early summer and continues strongly until frost.

In comparing this rose with its namesake painting, one might expect to smell burning birch wood or the crispness of a forest. Not so. ‘Campfire’ has very little fragrance, even though it is one of the sweetest roses to admire.

Michel Touchette of Jeffries Nurseries in Portage la Prairie, Man., has been promoting The Canadian Artist Series every chance he gets. He is a well-known grower in Canada who started out in the nursery trade in the 1970s, first at Aubin in Carman, Man., and then at Sheridan’s in southern Ontario. He told me this anecdotal story of ‘Campfire’.

At Rick Durand’s trialing nursery in Manitoba, thousands of roses were planted. Several growers and garden centre operators were invited to grade the trial plants. ‘Campfire’ was included in random spots, labelled with different numbers as though they were different plants. The nursery people grading the roses chose all the ‘Campfire’ under its different numbers as their top choices. “It’s that good,” says Touchette.

This series of roses came about as a result of the Canadian government slowdown of its rose breeding program in 1996. The government program had produced the legendary Explorer and Parkland (Morden) series of roses. Canadian growers were asked to contribute money and effort to the program. The growers took several thousand crosses and began the selection process.  ‘Campfire’ came out of the Morden Research Station. It is a hybrid of ‘My Hero’ and ‘Frontenac’. Morden has been the originator of many classic Canadian roses including ‘Winnipeg Parks’, ‘Adelaide Hoodless’, ‘Cuthbert Grant’, ‘Morden Belle’ and many others. Sold across North America and in Europe, Morden roses are known for their hardiness.

‘Campfire’ is labelled as being Zone Three, although with care, it can be grown in Zone Two. Some winter kill can be expected, especially above the snow line, in tougher climates.  In the prairies, this introduction has been finishing out at .8 metres tall by 1.0 metres wide. This is a good size for most gardens, as many gardeners prefer compact to sprawling. While it has some comparable traits to ‘Morden Sunrise’, it is hardier and of greater disease resistance. 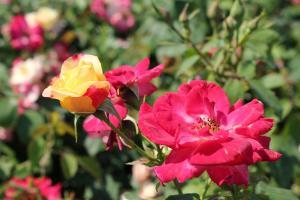 ‘Campfire’ is propagated on its own roots, not grafted. Suckers or graft incompatibility are not a problem. The plant can be a hungry feeder and regular fertilizer is recommended.  Roses that appear to be weak are often seen in Canadian gardens. Many gardeners attribute this to winter injury. Touchette maintains that, more often than not, the weakness is attributable to the lack of proper feeding.

As this is its first venture into the marketplace, how well ‘Campfire’ will sell is yet to be proven. The suspicion among nursery people is it will be well received, and this writer agrees. To date, there has been strong interest from the European countries, including Scandinavia. Nurseries are gearing up for the European market penetration in the years ahead.

One- and two-gallon sizes, as well as liners, will be available this spring from production nurseries that supported the original research. After a period of time, other nurseries will be allowed to produce ‘Campfire’. A royalty will be attached to support the ongoing breeding program.

Canadian roses have a strong presence in the world marketplace because of their quality and hardiness. They are appreciated around the world, grown in gardens by both the novice and the professional. ‘Campfire’ continues that tradition, along with its stable mates from The Canadian Artist Series. It is a rose with the label, “Grown and developed in Canada,” of which we can all be proud.

Rod McDonald owned and operated Lakeview Gardens, a successful garden centre/landscape firm in Regina, Sask., for 28 years. He now works full-time in the world of fine arts, writing, acting and producing in film, television and stage.