May 2019 marked the 25th year of the Canadian National Skills Competition, held in Halifax, N.S. Despite wind and rain, there was an incredible turnout, as 7,500 students experienced the competition, learned about career options in over 40 skilled trades, and visited over 50 Try-a-Trade booths. The competition saw over 550 students and apprentices from across Canada compete to be the best in their trades, and compete for the National Champion title.

It was a tough competition and the race was very close. At the same time, the National Competition was happening, with a separate team from Quebec working hard on a three-day project to compete for the scores to send them to the upcoming Worlds Competition, happening in August in Kazan, Russia.

This year, Landscape Gardening also hosted not one, but two Try-a-Trades. We represented hardscape with two Paver Challenges and we also represented Softscape with a Plant ID Challenge. Students that could identify five different plants were allowed to take a plant, along with growing and care instructions. Our booth had consistently long lines waiting to participate and learn a little about the industry. We could not have run these Try-a-Trades booths without the help of volunteers Lauren Fry, President of Landscape Nova Scotia and CNLA Skills Chair; Jan Loner, Landscape Nova Scotia; Jim Landry, ED of Landscape New Brunswick/P.E.I; Jeff Morton, Senior Instructor at Dalhousie University; Tracey Mackenzie, Assistant Professor at Dalhousie University and Leslie Sison of CNLA.

The competition got very exciting on day two when it came down to the wire. The last 10 minutes of the competition really drew in the crowds. There were cheers, drums beating and lots of movement right to the very last second. It was an amazing two days, and everyone persevered and rose to the challenge. All teams were able to finish on time and the CNLA congratulates you all.

The National Awards of Landscape Excellence ceremony took place on Aug. 14 in Abbotsford, B.C. This year, over 130 people attended the prestigious event to celebrate the 2019 National Award winners, whose projects demonstrated the best of the best in the landscape horticulture profession. Each province nominates members from the provincial awards of excellence competitions that are then entered into the national awards. Next year’s ceremony will take place in Edmonton, Alta.


This summer’s Garden Centres Canada Summit, based in Mississauga, Ont., drew modest numbers but great reviews. “Made some great connections, and came away with some ‘real’ information we can use to help our business,” said Rob and Kristan Fairlie of Port Carling Garden Centre, Port Carling, Ont. The two-day event featured four tour destinations and four thought-provoking speakers.

The GCC committee is reviewing Vancouver, Edmonton and Winnipeg locations for next year’s event. The dates and location will be announced in December. 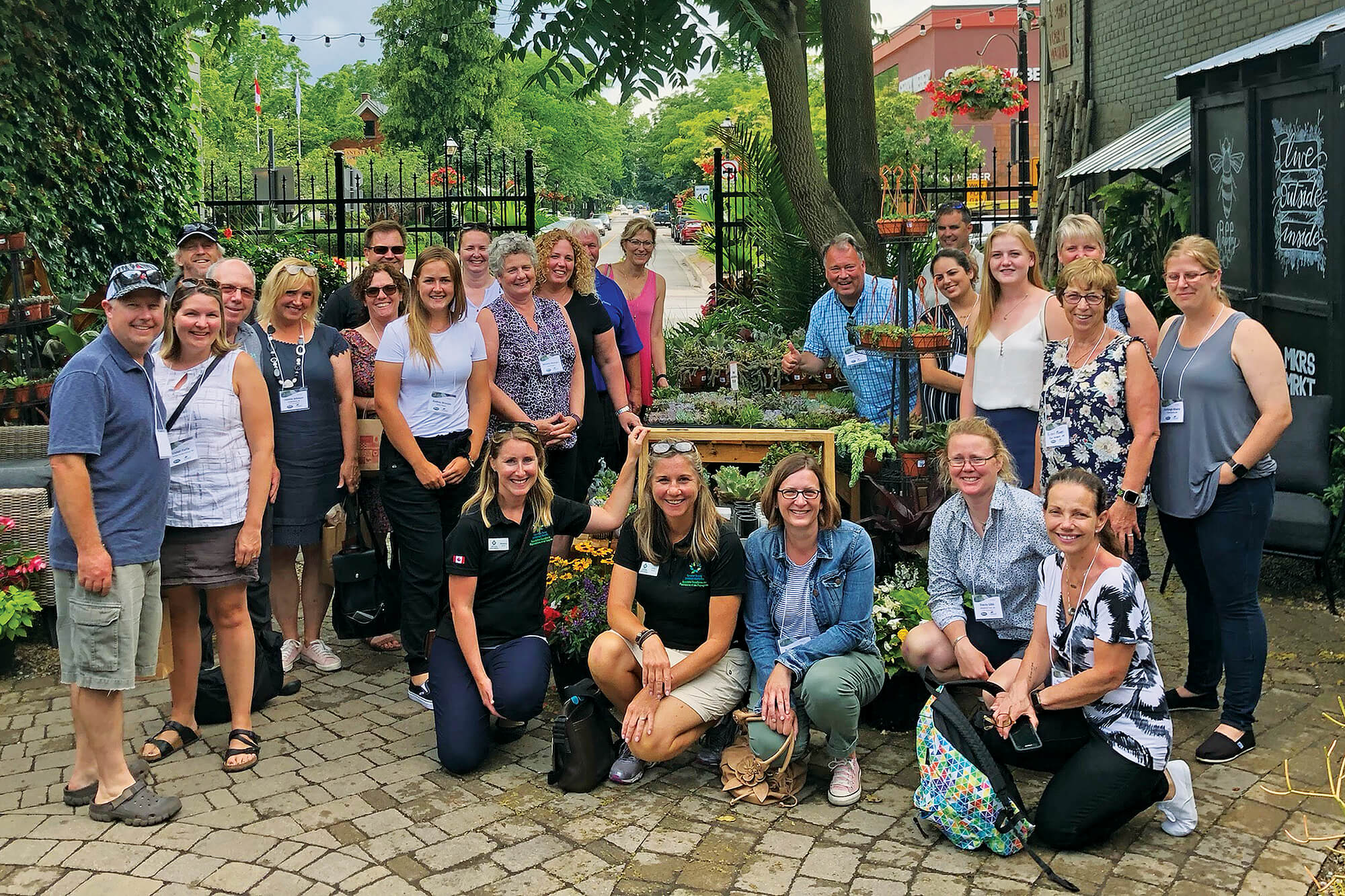 
It can be challenging to keep track of all the trade shows that occur each year. We encourage you to mark your calendars now with the dates of these upcoming trade shows and conferences that are hosted by your provincial associations.

Landscape Ontario Congress takes place in early January at the Toronto Congress Centre and is a great way to start off the year. You can plan ahead by checking out what equipment you might need for the upcoming season or connect with suppliers. Rated as one of North America’s top-rated shows for the green industry it features over 600 exhibitors, more than 1,300 booths covering 10 acres, 14,000 attendees and over 60 professional development sessions. Next year’s event is scheduled for January 7-9, 2020 — mark your calendars now! Go to locongress.com to register or for more information.

Grow is hosted by the Manitoba Nursery Landscape Association at Canad Inns Destination Centre Polo Park in Winnipeg. Building on the Manitoba Green Show tradition, Grow is jam-packed with everything you need to get excited about the upcoming season — education, awards and a fun evening! Everything is included in the registration including food, seminars, inspiration and a great opportunity to mix and mingle with peers and industry suppliers. No date has been set yet for next year, but we will be sure to announce it when it becomes available. For more information go to grow.mbnla.com.

CanWest will be held on Sept. 25 - 26 at Tradex in Abbotsford, B.C. This is the perfect opportunity to find tools, equipment, or supplies you may need to complete your projects. With a lot of work already completed, you can also use this show to think ahead for next year and see what changes you can make and how to better prepare yourself. CanWest is Western Canada’s premier horticultural trade show, connecting buyers and sellers throughout Canada and the Pacific Northwest. For more information, you can go to canwesthortshow.com.

GISC (Green Industry Show and Conference) is Alberta’s premier trade show for the landscape, greenhouse, nursery, garden centre, turf and tree care industry. It is the largest trade show of its kind between Toronto and Vancouver, with over 140 exhibitors. With a relatively new tradition of rotating between Edmonton and Calgary, the 2019 GISC will be held November 14-15 in the BMO Centre at Stampede Park in Calgary. To find out more about what you can expect, check out greenindustryshow.com.

HortEast, traditionally held each year in November, rotates between Nova Scotia and New Brunswick. Moncton, N.B., will be the host city for 2019. HortEast is billed as the annual trade show for those who have an interest in the landscape industry in Atlantic Canada and surrounding areas focusing on seminars and exhibits for landscape contractors; greenhouse, nursery and garden centre operators; tree specialists; lawn care specialists; and turf producers. Network at social events, learn at pre-show workshops and conference sessions, participate in industry exams and visit over 50 exhibitors. To see more, go to horteast.com.

Regardless if you attend one or all the tradeshows produced by your provincial associations, there is always something to be gained. Each of the shows strive to have something for everyone including landscapers, retailers, growers and suppliers.
The Canadian Nursery Landscape Association is the federation of Canada’s provincial horticultural trade associations. Visit www.cnla-acpp.ca for more information.
Share
Tweet
Mail