The original garden centre in Waterdown was damaged by fire in the late 1970s.

Share
Tweet
Mail
Celebrating the 100th anniversary of Connon Nurseries in 2006, the Vanderkruk families are thankful for the blessings they have received. The company has seen many ups and downs over the last century, but thanks to the dedication of their employees, support of their customers and friends and the grace of God, they have prospered and become one of the driving forces in the Canadian horticulture industry.

The company began as The Connon Floral Co. Ltd., with offices and greenhouses in Hamilton, Ont. The owner, John Connon, a keen Scottish horticulturist, gradually expanded his business, purchasing a 126-acre farm in Stoney Creek in 1911. The new name, John Connon Company Ltd., was incorporated in 1912. A catalogue from that era offers a comprehensive inventory, including flowering plants, roses, deciduous and evergreen trees, shrubs, vines and perennials. 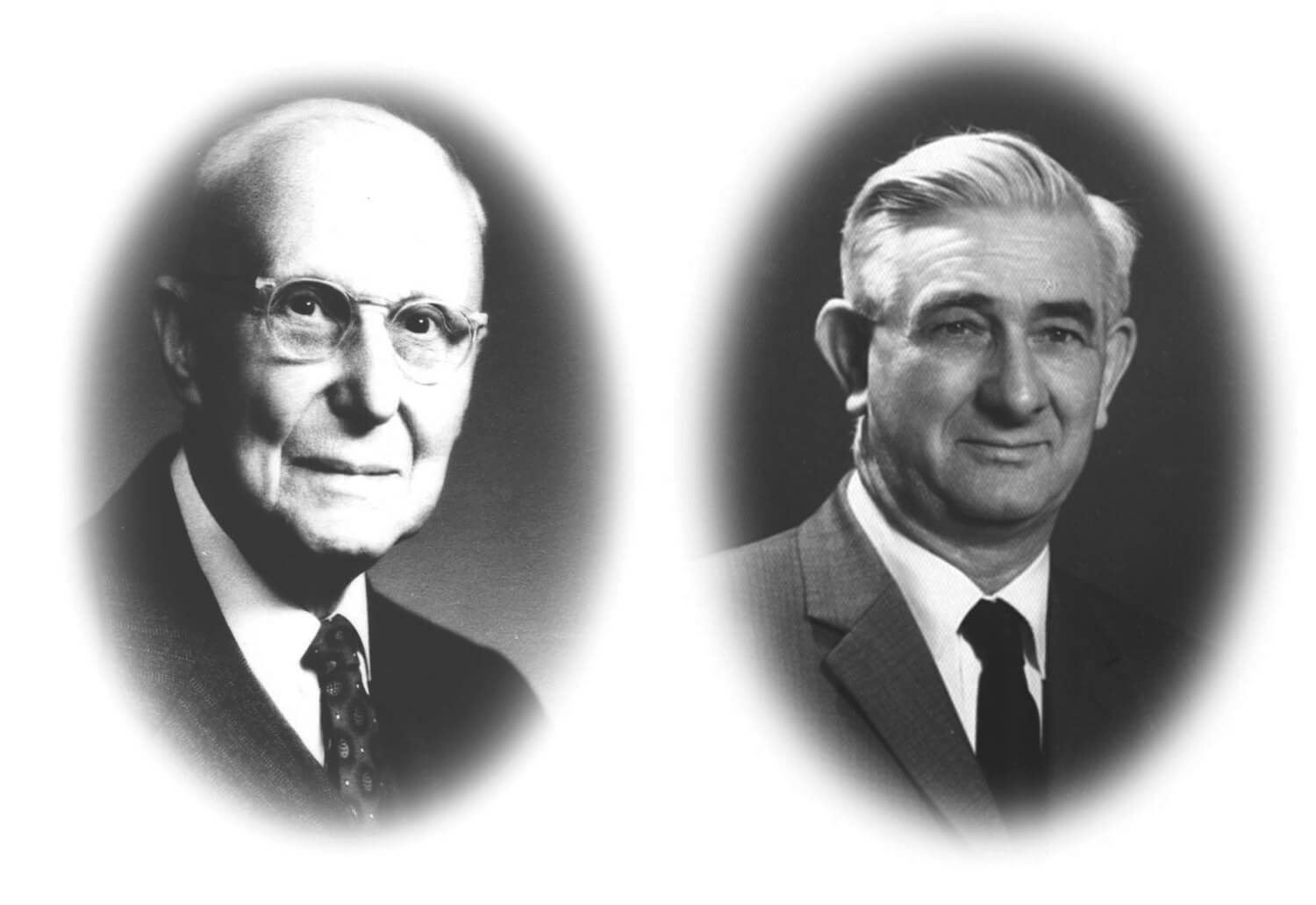 Major John Connon (left) and Cornelius Vanderkurk). The company continued to grow after Major Connon returned from service in World War I and moved to the property on Highway 5 in Waterdown in 1931. Due to an economic downturn in the early 1930s, business was conducted from the basement of John Connon’s home. The company struggled for survival as the demand for outdoor plants was limited to smaller items such as peonies, bulbs and roses.

Thanks to the post-World War II building boom, the company gradually began to thrive. And in the spring of 1952, Major Connon hired a newly-arrived Dutch immigrant with a strong horticultural background, Cornelius Vanderkruk.

Like so many others in post-war Europe, the Vanderkruk family looked to Canada as a place where they could prosper. After crossing the North Atlantic during a harrowing nine-day voyage, Cornelius, his wife Pauline and their seven children landed in Halifax harbour. They traveled by train to Hamilton where the family temporarily settled. Men came from their church each day to take Mr. Vanderkruk out job hunting. At the end of the first week, he had been hired at John Connon Co. Major Connon was then 80 years old and quickly recognized and appreciated Mr. Vanderkruk’s nursery management skills and soon appointed him general manager of the nursery.

In 1956 Cornelius Vanderkruk purchased a 50 per cent interest in the company, and in 1958 he bought the remaining shares and became the sole owner of Connon Nurseries. Major Connon stayed active in the business until he passed away in 1961.
The 1960s and 1970s were formative years for the Canadian horticulture industry. Connon Nurseries adopted the idea of potting up bare root shrubs for summer sales in 1973. This idea extend the growing season for the garden centre and landscaper beyond May 24. 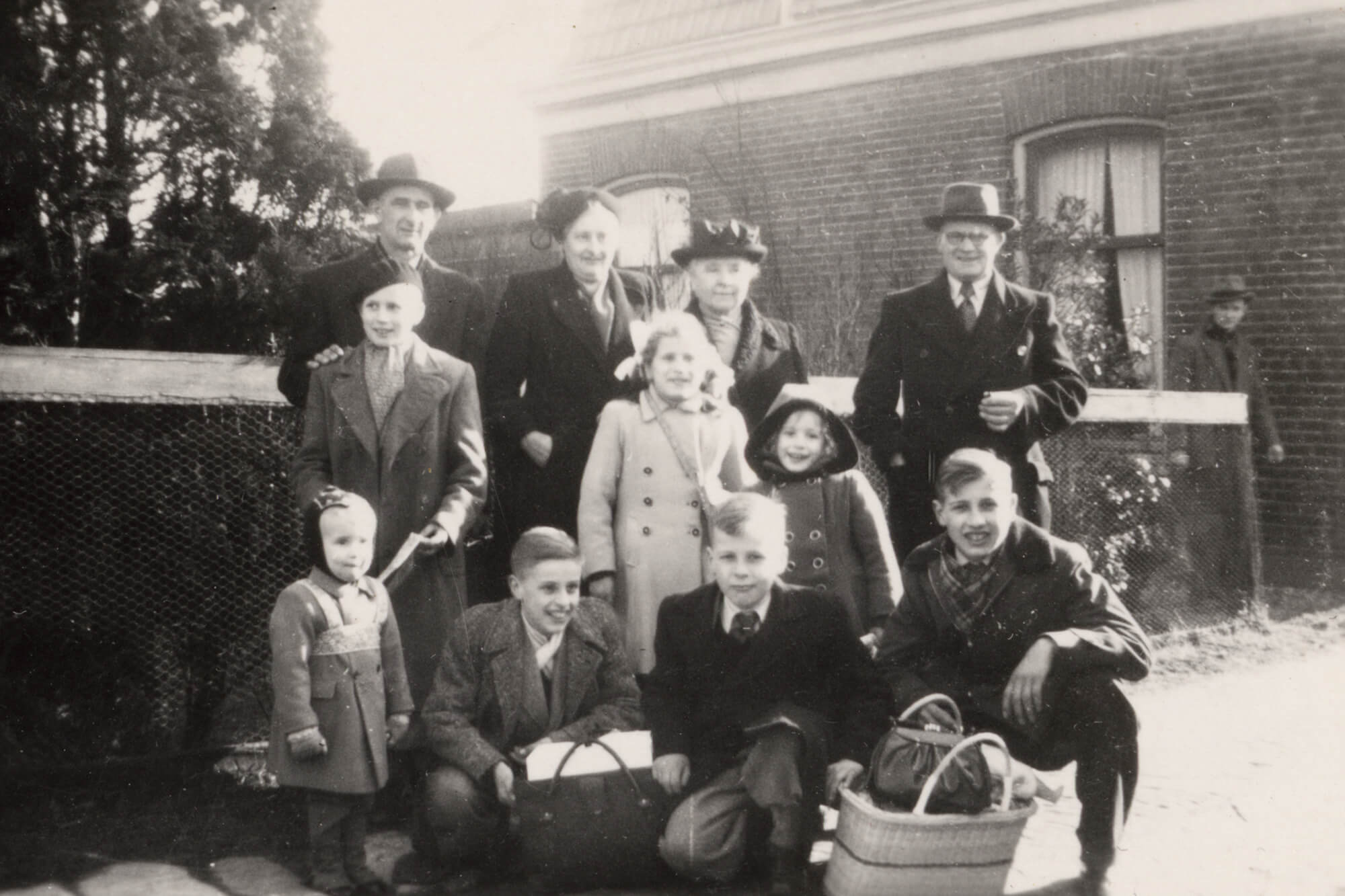 The Vanderkruk family emigrated from Holland in 1952. 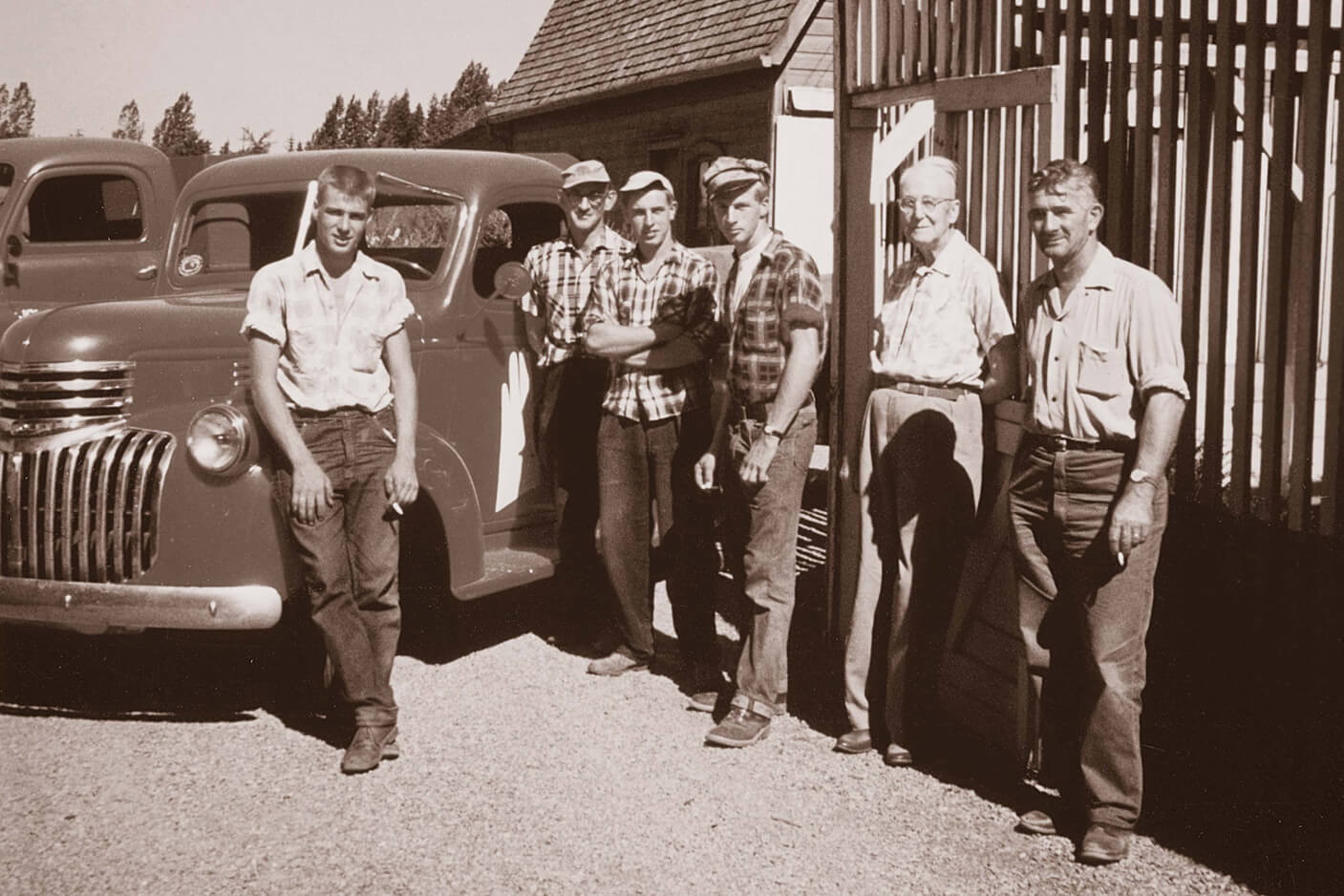 Major John Connon and Cornelius Vanderkruk both played an important part in developing and forwarding the Canadian horticulture industry.
Having the resources and foresight to predict developing markets, Connon Nurseries greatly enhanced its product selection and inventory by buying additional nursery stock in the 1970s from the U.S. and reselling it domestically. Always looking for new growing techniques, the company was one of the first nurseries in Canada to invest in a container growing facility.

The four Vanderkruk sons, Neil, Bill, Art and Cor, began working in the nursery when they were young and initially helped out wherever they were needed. Gradually each Vanderkruk brother took over specific duties in the business according to his respective skills and interests. Neil oversaw sales and purchases, Art was head of plant production and Cor ran the retail division and supplied local landscape contractors. Bill Vanderkruk began his own company, Hortico Nurseries, in the early 1970s. Cornelius Vanderkruk managed the bookkeeping and took an active interest in the company until he passed away in 1977.

By 1986, the company had 510 acres under production and was known as one of the largest and most progressive nurseries in Canada. As the youngest generation of Vanderkruks began to show interest in the family business, Neil, Art and Cor knew it was now time to divide the company into three separate businesses. 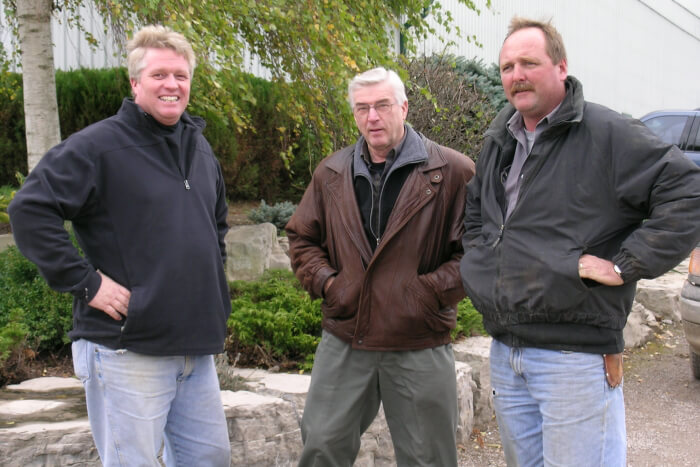 A.V.K. Nursery Holdings Inc. currently operates its nursery on six farms and 200 acres in the Flamborough area, with its main office and primary shipping facility in Rockton, Ont. The container division is located near Strabane, Ont. where most of the conifers and shrubs are grown. A.V.K. Nursery Holdings Inc. carries a complete line of nursery stock for wholesale distribution to garden centres, the landscape trade, municipalities and conservation authorities from Alberta to Newfoundland, as well as parts of the United States. A.V.K. Nursery Holdings Inc. has recently introduced container-grown trees for garden centre interest. They currently have an extensive caliper tree collection for the landscape trade.

Art oversees the administration of the nursery and enjoys spending time in the “growing” of the nursery. Art’s son Dan manages container production, and Art’s son-in-law John manages the field operations. With a workforce of more than 75 people, A.V.K. Nursery Holdings Inc. recognizes and values the important contribution each employee has made to the success of the company.

To commemorate the centennial anniversary of Connon Nurseries in a meaningful way, A.V.K. Nursery Holdings is donating $2.50 for every Euonymus alatus ‘Compactus’ sold in 2006 to the United Way. 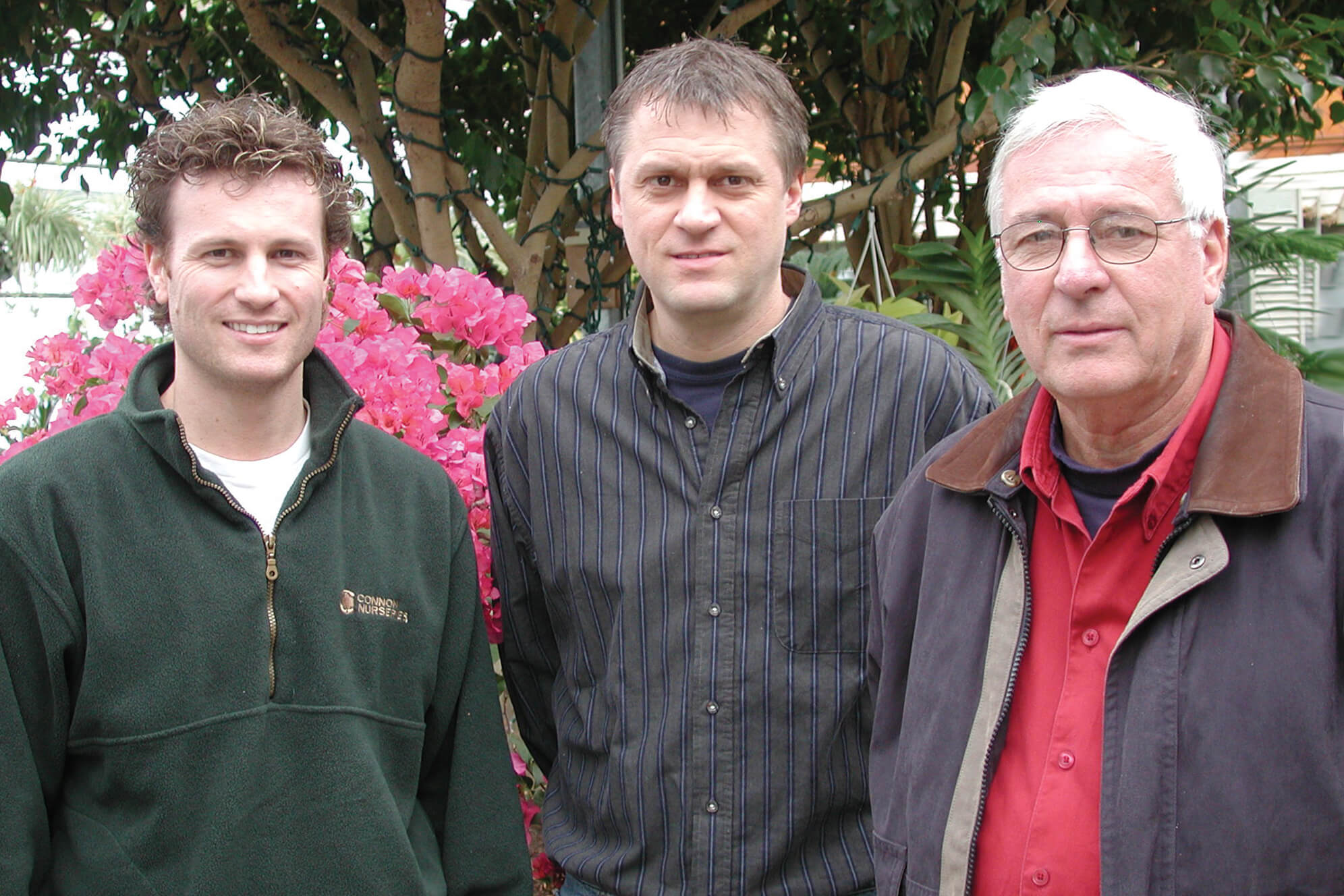 Over the last 20 years, C.B. Vanderkruk Holdings has grown from a single garden centre in Waterdown, to become a multi-faceted company. In Waterdown, they have expanded to include a second sales facility for landscape contractors, as well as two additional container and pot-in-pot tree production farms. A third sales facility now operates out of Trenton, Ontario.

With the determination and ambitions of over 125 full and part-time staff members, C.B. Vanderkruk Holdings is able to provide its customers with quality plant material and professional service to meet the goal of being a one-stop supplier to both the horticultural trade and the hobby gardener.

In 2006, owner Cor Vanderkruk retired, leaving the running of the business to the next Vanderkruk generation, his sons Rob, Terry, and Kevin.

To give thanks to their wholesale customers during this year of celebration, C.B. Vanderkruk Holdings created a Give Back Program that is currently in effect. To show appreciation to those who have helped build the business, five per cent of each purchase from July 1, 2006 through to December 31, 2006 is being given back with every wholesale transaction. In addition this fall, C.B. Vanderkruk Holdings will be hosting an evening for its staff, and the members of the Flamborough Heritage society, to celebrate both this centennial event as well as the retirement of Cor Vanderkruk.

The company grows and supplies a full line of landscape plants to its wholesale customers, with the greatest focus on container production of shrubs, trees and evergreens. A redesigned shipping yard gets customers’ trucks loaded and on their way as quickly as possible.

Now enjoying semi-retirement, Neil has left the day-to-day running of the company to his sons Case (production), Rick (sales) and Mark (perennials). With the help of their many loyal employees, the new generation continues to build on the foundation of respect and hard work built by the original founder of the John Connon Floral Co.

Staff at Neil Vanderkruk Holdings began planning for the centennial celebration several years ago. The company offered to host the annual Landscape Ontario Growers Research Auction as well as the Hamilton Chapter Chicken Roast on the same day, and turned the day-long event into a barn-burner that saw over $30,000 raised for scholarships and research. There were also 1,800 friends and customers fed and entertained by the Jim Cuddy Band later that evening.

To honour this historic event, the three companies sharing the Connon trade name published a booklet, Celebration of a Century. The above information is taken from the book with the authors’ permission.
Share
Tweet
Mail