Media, politicians and many others gathered at the Chinese Baptist Church in Scarborough for the ceremony and cutting process to begin the Vimy Oaks project.

Share
Tweet
Mail
On April 9, 1917, close to a 100,000 Canadians poured from trenches, dugouts and tunnels to begin the Battle of Vimy Ridge.

Among those soldiers was Leslie Miller, a farm boy from Toronto. When the guns had gone silent, Vimy Ridge was barren ground. Nothing was left standing, including the old oaks. From this, Miller somehow located acorns buried in the mud of the battlefield. He sent them home to be planted on his farm, located along Kennedy Road in Scarborough. When he did make it back home, nine saplings were growing, and Miller would tend them the rest of his life. He passed away in 1979.

Jump ahead 98 years, and Landscape Ontario member Connon  Nurseries NVK is working to ensure the legacy of Vimy, its English oaks, and Leslie Miller.

For Case Vanderkruk, vice-president of Connon Nurseries NVK, “As soon as I received the request to help with the project, there was a lot that resonated with me.”

Vanderkruk and propagator at Connon Andrew Barbour are working to produce enough English oak trees to return to Vimy for the battle’s centennial in 2017. The species Quercus robur, is not native to Canada.

The process to return the Vimy oaks began when Monty McDonald, a longtime friend of Miller’s, came up with the idea of repatriating the Vimy oaks in Scarborough back to Vimy, France.

Shortly after Miller’s death, the property on Kennedy Rd., north of Highway 401, was sold to the Chinese Baptist Church, which over the years left the old woodlot, where the trees were planted, undisturbed. “Thank goodness the church purchased the property, because if it had been a retail operation the trees would be gone and a parking lot would be there today,” says McDonald.

On Jan. 24, a ceremony and gathering of cuttings from the oaks took place at the church. McDonald welcomed the nearly 100 people who attended the event. He introduced former Minister of the Environment Peter Kent, who said, “These trees stand as a symbol of the strength and determination of those who gave so much nearly 100 years ago, and it is truly an honour to be here to witness the beginning of what will become a lasting reminder of the Canadian sacrifice on Vimy Ridge.”

Also attending the ceremony was Vimy Foundation executive director, Jeremy Diamond. “Generations of people from all over will be able to come and see a true piece of Vimy in these trees.”

Following the ceremonies, arborists Andrew Cowell and Chris Brown, from the City of Oakville, and Caitlin Ayling from Aldershot Greenhouses, cut the branches from the oak trees, while Case Vanderkruk and Andrew Barbour were there to choose the best ones for transport to Connon Nurseries NVK in Waterdown. 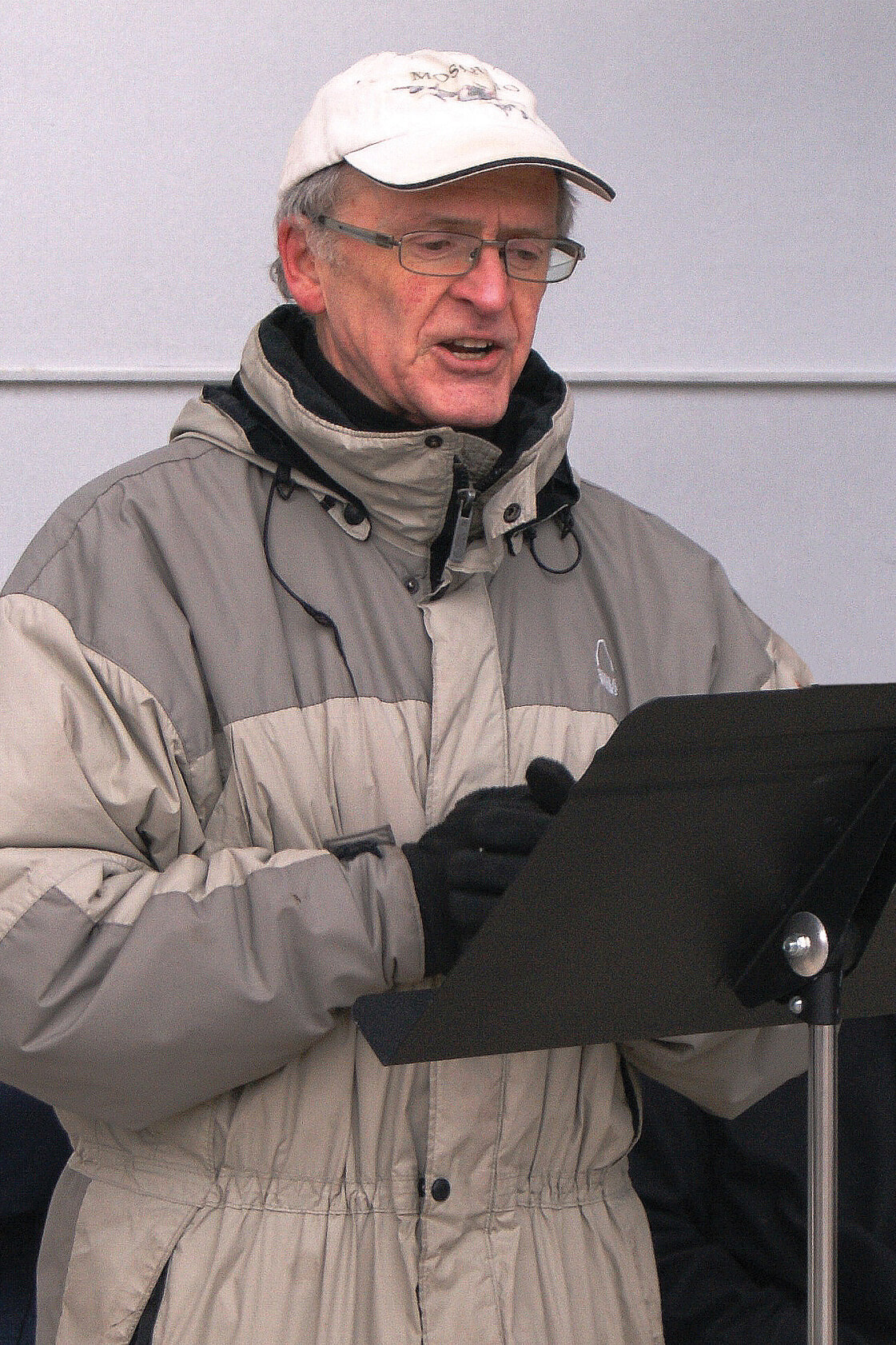 Monty McDonald proudly spoke of the support and enthusiasm being generated to ensure that oak trees from the Battle of Vimy were returned to the site to celebrate the event’s 100th year.

Now the pressure is on us,” says Barbour. “We will work to provide the best possible trees for transplant at Vimy in 2017.” The growers expect that around 1,000 trees should be available by then, although the project will need 120 trees. Vanderkruk says those trees not used for the Vimy celebration, could be planted at ceremonies in Canada.

Under the watchful eye of Barbour, the cuttings from the Kennedy Road property will be grafted onto a host. “Once the union takes, it will be important to create a good rooting system.”

Not all the trees will be produced through grafting. A couple of hundred cuttings treated with rooting hormone have been planted in grow containers, and Monty McDonald found an acorn under the brush that had began germination. This one acorn is now under the care of Andrew Barbour.

Case Vanderkruk said that the five oaks left on the property did not produce many acorns. As well, the process to grow oaks from an acorn and have them a suitable size for 2017 wouldn’t be feasible. 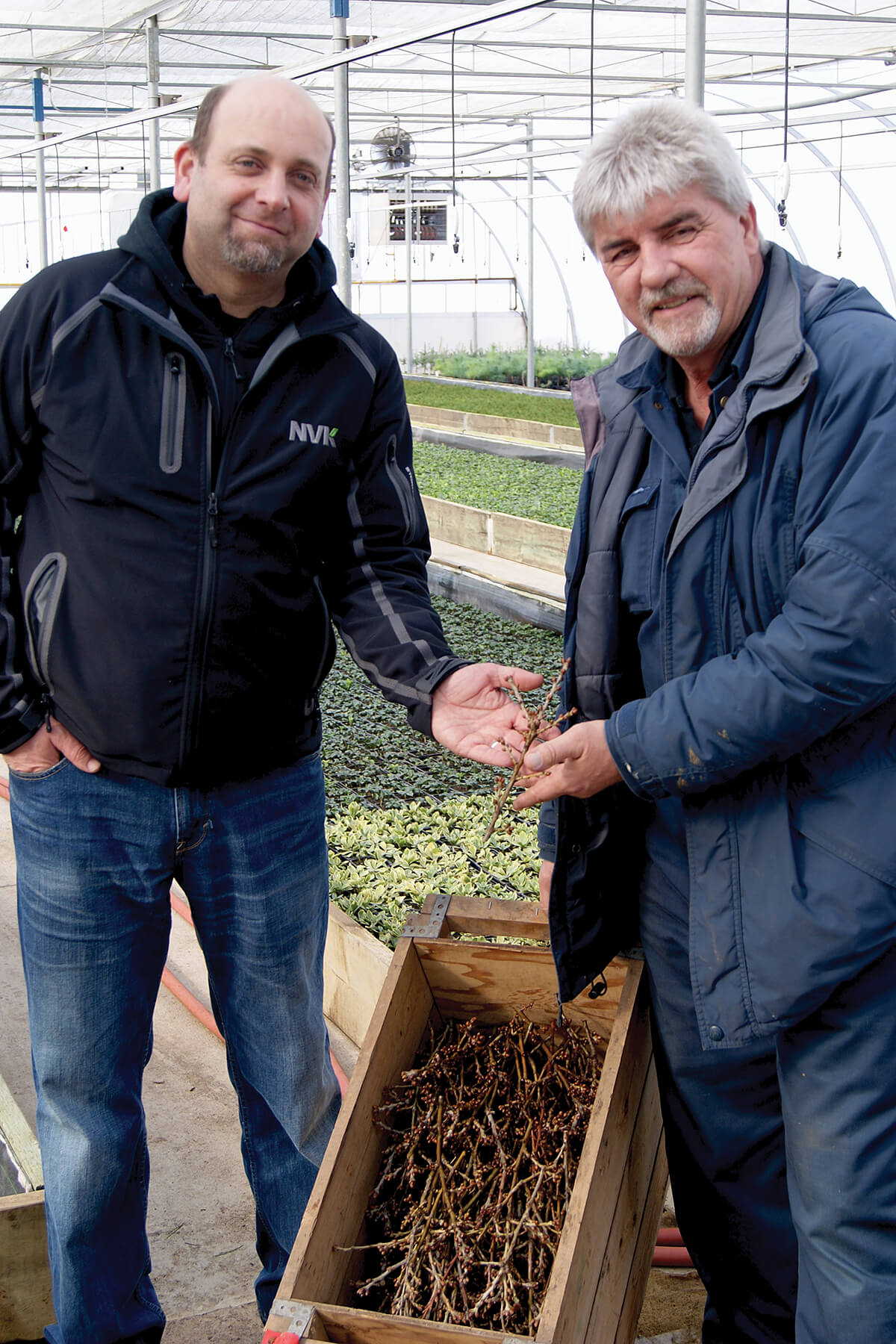 Propagator Andrew Barbour and Case Vanderkruk of Connon Nurseries NVK are working to produce enough oak trees to return to Vimy for the battle’s centennial in 2017.

Asked why he took on the project, Vanderkruk gave a number of reasons, but cited how he felt it was important that the industry become involved in such a great project. “This project is just one way that we can show our industry’s professionalism and how many of us believe it’s important to be good stewards and leave a positive legacy.”

Another reason to become involved is a personal one for Vanderkruk. “I’m a bit of a history buff, and Vimy is one of the major turning points in our country’s history.” He noted that Connon Nurseries also has a long and rich history. It is over 100 years old, having been founded by a man with a military background Major John Connon. “He hired my grandfather Cornelius Vanderkruk.”

Cornelius later purchased Connon Nurseries, and today, five generations of the Vanderkruk family spend their time both growing plants and the business. Case’s father Neil Vanderkruk is a past president of Landscape Ontario.

“I see this project as one of legacy for our country, industry and Vimy, and Connon Nurseries NVK,” said Case.

Asked if he would want to attend the planting in April 2017, Case Vanderkruk said, “That would be a great honour to be there to return the oaks to the site...but we’ll wait and see.”