Exceed expectations and stay on budget

When Robin and Ron Perlmutter were helping plan their daughter’s wedding, they knew the backyard of their Toronto home would be a special place for wedding photos. But they also knew the space needed some work.

So Robin, a retired music teacher, began calling landscaping companies to plan a redesign of the backyard and quickly decided the Toronto-based Infinite Possibilities, co-owned by Alex Zalewski, was the one they wanted to work with.

“It was being done in a somewhat rushed manner because of our timing, not his, and we did not know Alex beforehand, so it took a lot of blind faith,” Ron recalled. “We felt comfortable enough just based on speaking with him,” Robin added.

Then it was time for the sticker shock.

Zalewski popped the budget question in their first meeting, and Ron, a commercial real estate executive, swatted it away.

“It’s like when you’re buying a car, they say how much do you want to spend? Well, you don’t really give a straight answer,” Ron joked. By their second meeting, Zalewski had a conceptual outline of the redesigned backyard, complete with an estimate. “I think everything in our wish list was there and things that he had in his wish list were there,” Ron said. “It was over $200,000, which was totally not going to happen.”

That was nearly double what the Perlmutters had in mind. But they also realized it included work they planned to get done separately, like a fire pit.

“in his design, he clearly mapped out everything, the lighting system, where out fire pit goes,” Ron said. Zalewski added value by creating a detailed plan the Perlmutters could build off.

Landscaping is a big commitment in time and money for clients, especially when the tab hits six figures.

Clients, even those who understand and appreciate the value of professional landscaping, can quickly become overwhelmed as costs soar during the planning phase. How can landscape contractors navigate the maze of large projects, negotiate budgets and the scope of work, and finally pull themselves and their clients across the finish line?

The Perlmutter’s backyard in Toronto, Ont was designed and built by Inifinite Possibilities Landscape and Design.

For Zalewski, the cost discussion is important to have early on.

“I’ve been doing this long enough that I can get a kind of sense of how much something is going to cost after hearing a client describe the project. So when I’m meeting them, I might say, ‘what’s your budget?’ and if they don’t know or if it’s too low, I kind of go through each of the items they talked to me about, give them a general idea where they stand. It could be $50- to 100,000 dollars, it could be a very big range, but just to get them thinking about that neighborhood is how I start.”

That approach is echoed by Bartels. “Throughout the design phase, the client is shown concepts, revisions and final drawings with a budget to ensure they meet both of their objectives: an awesome yard and a budget that they deem reasonable. Every client has both of these objectives, but they pull in opposite directions. The design phase is meant to ratchet these two objectives together.”


It’s all in the details

When Sandy Brodar and her husband approached Cedar Springs in 2016, they too were in for a sticker shock. Owners of a plumbing and drain business in Oakville, Ont., the couple had prepared their own estimate of what a complete landscape design project for their house might cost, but they were still surprised when an estimate of nearly $250,000 came back, about 15 per cent higher than expected.

The central part of the negotiation between company and client often between the quote and the customer’s target budget. The solution could involve various components, including a detailed explanation of the cost, adjusting the design, and changing materials.

In Brodar’s case, she was reassured when Cedar Springs Landscapes team pointed out their cost included things that she had not taken into account.

“Compared to others’ quotes, they really took in all the factors that you don’t think of before, from painting to electrical to the disposal fees,” Brodar said. “Often you’ll hear people say ‘oh, we went way over budget.’ We knew going in what our budget was and it stayed within that budget because of how detailed the quote was.”

The pool in their backyard was an important feature that involved some back and forth. The Brodars wanted a giant pool, because, why not, and who doesn’t?

Bartels advised against it.

“They explained it’ll be too overwhelming, not enough social space, and that’s not as advantageous when you sell your house. They put the design more into scale for the size of our backyard,” Brodar said. Cedar Spring’s professional design also nailed the pool location.

“Our pool is in the sun all day,” Brodar said. 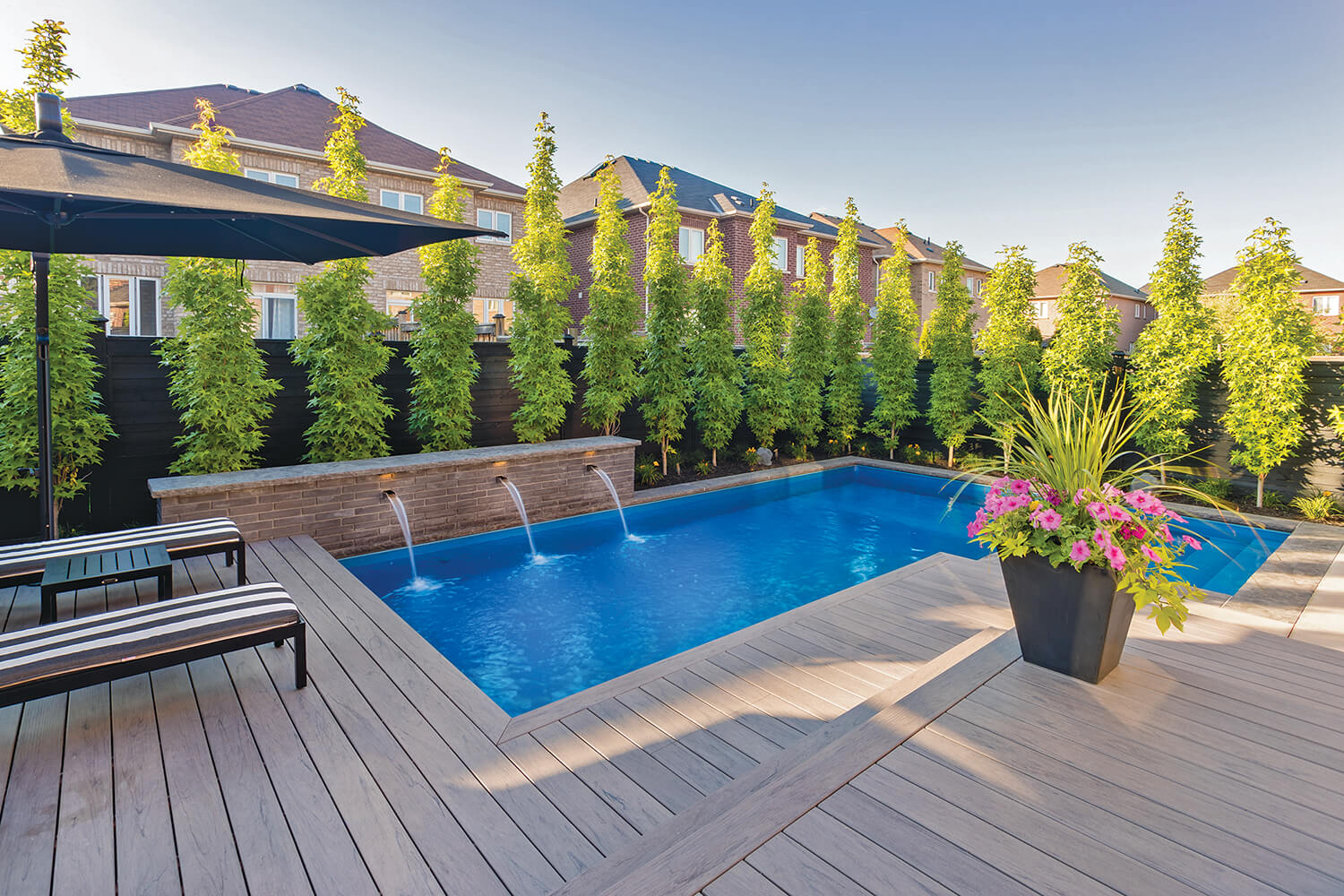 The Brodnar’s backyard in Oakville, Ont., designed and built by Cedar Springs Landscapes.

The view from the Perlmutters’ kitchen was a nearly 60-foot brick wall, enclosing their neighbour’s pool that ran the width of the backyard. Their project included making the wall less visible, improving privacy, adding a garden bed to help Ron indulge his love of gardening, and an inviting outdoor dining area.

Mature tree coverage over the backyard meant tree roots spread across the space, making it difficult to maintain the lawn, so artificial turf was used instead. “That was something on our wish list,” Ron said. The roots also made it necessary to raise the garden bed.

There was an existing cedar screen hiding part of the brick wall, and Zalewski suggested a similar structure as a more decorative element that would harmonize with the functional one, and also replace part of a fence with another neighbour.

“It was highly unlikely our neighbours would share the cost of the fence, so his idea was to extend the concept of this lattice screening as, not a complete length of the fence, but just panels which played off of the other end of the yard where most of the screening was. It accomplished a lot of things, certainly one was the budget was less, the other was it made the whole backyard have an integral aspect to it, and gave us privacy as well,” Ron said.

Zalewski also used natural stone left over from a previous job in the front for banding around the patio, helping integrate the looks of both spaces. “That was helpful - saved money, used up what we had, it was a win on all fronts,” Ron added.

Some ideas suggested by Zalewski were left out due to the cost, like a second level for the deck, and new glass panel railings.

During their early discussions, Ron had joked they would love to have a fountain, and was pleasantly surprised at the end. “We did get it, at the end of the project he gave us a gift essentially, which was a larger, more intricate water feature than we paid for,” he said.

Similarly, Brodar was happy she didn’t get what she wanted with Cedar Springs. She got more.

“We initially wanted the barbecue in the back and they made a very good point to move it up towards the sliding door because if you want to barbecue in the winter you’re not going to want to walk through the snow, so we made that space more accessible all year round.”

Jennifer Hayman, who runs Jennifer Hayman Landscape Design Group, a boutique landscape design firm with clients around the GTA and Ontario’s cottage country, notes a design should focus on maximizing a client’s budget rather than merely stretching it.

“Where a designer really can add value is to figure out what their priorities are. For some clients the priority may be a pool and for others it may be privacy. Once you identify that you’re able to figure out where to maximize the budget, so for instance if privacy is most important then maybe larger trees are the key. You want to make sure that ultimately the clients have the greatest return on their investment and then you know they will refer you to everybody.”

Apart from design adjustments to meet the clients’ budget, the most successful outcome for landscape contractors obviously lies in convincing the customers of the value of the service. Especially if the cost exceeds what they originally had in mind.

From the landscapers’ point of view, one way of ensuring satisfied customers is to pre-qualify clients before taking on their projects. Both Bartels and Zalewski note their design fees are their best de facto qualifiers.

“The design phase costs between $4,000 and $10,000, and is typically between three to five per cent of the overall projected budget,” Bartels said. “Once they agree to our design process, most clients end up buying the project from us.”

Zalewski agreed: “If someone is shopping around looking for the cheapest possible price, they’re probably going to go with someone who offers free design services.” 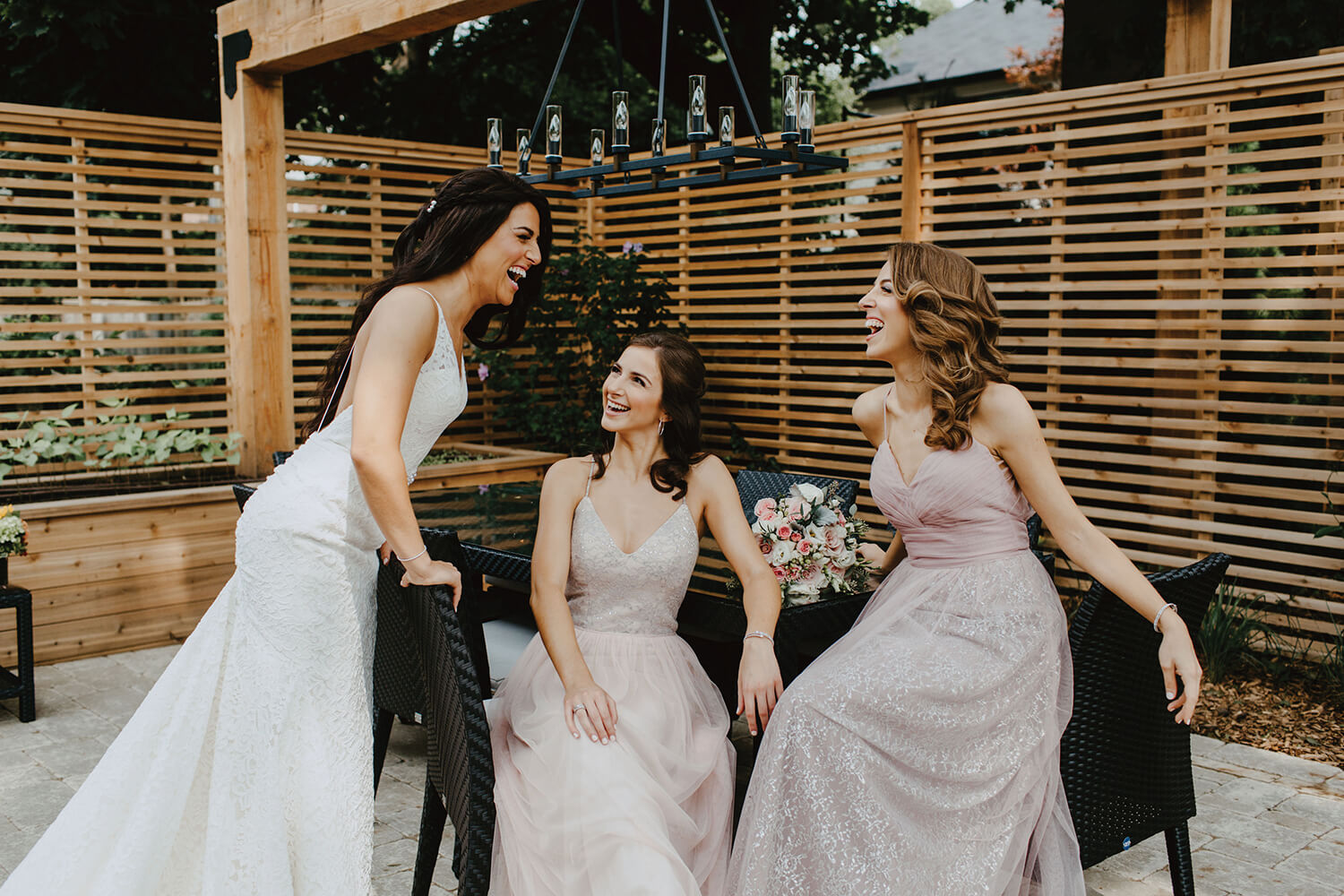 The Perlmutter’s backyard was the backdrop for their daughter’s wedding photos. The entire process, from the first meeting to the last paver, is a delicate dance between contractor and client. Sometimes, it goes on even longer. Three years later, Brodar is still raving about the customer service she gets from Cedar Springs Landscapes.

“We cannot get over the fact that we’re blessed to have this outdoor space in the city,” Robin said. “When guests come over, their mouths literally drop. I’m not bragging,” she added with a laugh.

That’s going from sticker shock to mission accomplished, for both the landscaper and the client.