As borders open back up and the movement of people and products increases, so too does the threat of invasive pests. As horticulture professionals, we need to be prepared to battle harmful alien creatures whose introduction and spread threatens the recreational, ecological and economic values of our natural environment.

In any battle, knowing your enemy is critical. So we must begin by arming ourselves with the knowledge of current invasive species that can be found in our own backyard, as well as the emerging pests that threaten the future of our forests and landscapes. By increasing awareness and sharing key identification features and visual indicators, we can all work together to reduce the spread and potential losses caused by these harmful creatures.

Dangerous pests in our backyards

These tiny insects, similar to aphids, attack hemlock trees by attaching and feeding at the base of its needles. Their feeding can cause premature dieback of buds and shoots, foliage discoloration, and needle loss, and can even cause death over a period of three to 10 years. The immobile, flat, black nymphs begin feeding on the nutrients and sap from the underside of the twigs in spring, but then cease feeding throughout the growing season. In mid-October, they resume in order to develop into adults and begin laying egg masses of up to 300 eggs in white, woolly egg sacs. The best time to inspect for this pest is from March-May, as the egg sacs become more visible in late spring (Fig. 1).

Be aware, they can easily be confused with spider webbing and bird droppings.

Although the loss of our native hemlock stands (Tsuga canadensis) would significantly impact entire forest ecosystems, in the landscape our ornamental hemlocks may also be vulnerable. Previous Ontario detections of HWA occurred in 2019 in Wainfleet and Niagara Falls. The Canadian Food Inspection Agency (CFIA) also confirmed its presence in Fort Erie in October 2021. The young nymphs, or “crawlers” are the only mobile stage, hitching a ride on birds and other animals, or by wind. This is of major concern as bird migration patterns provide a dangerous pathway for increasing the spread of this devastating pest. Currently, no single management tactic has been successful in controlling HWA, but silvicultural, chemical and biological control options continue to be explored. 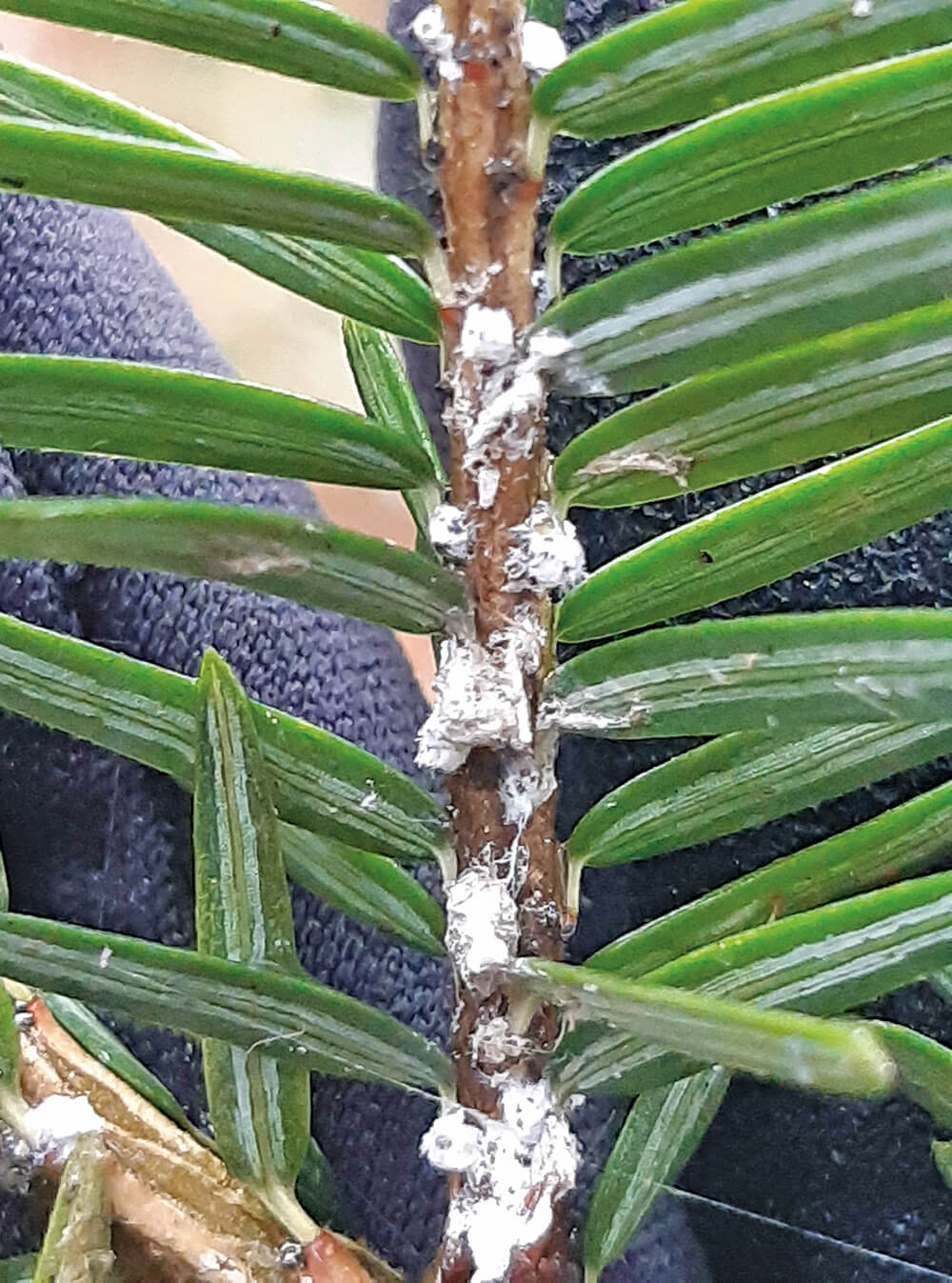 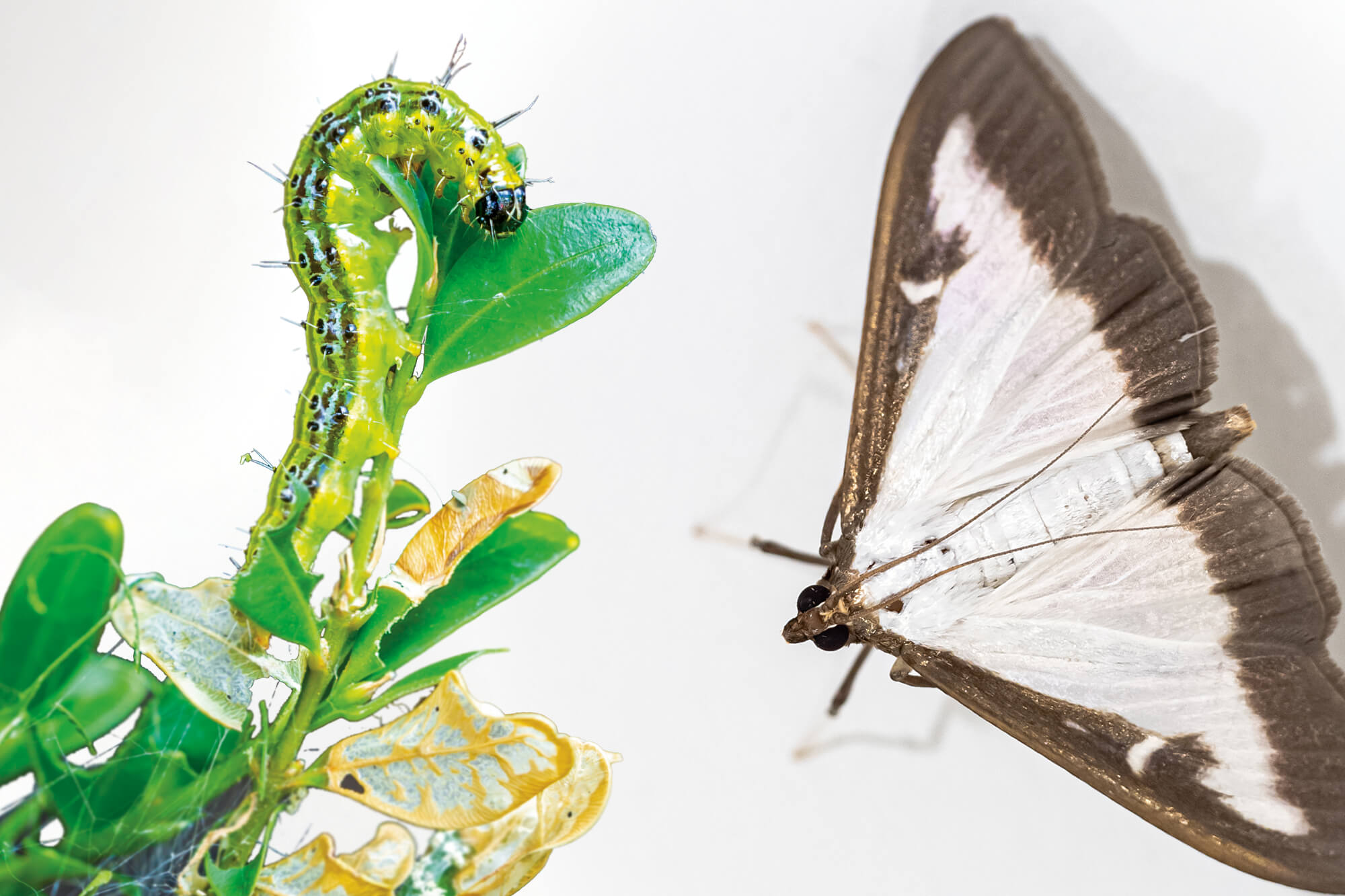 Caterpillar stage (left) and full adult (right). Box tree moth was first detected in the Toronto area in 2018 and has since been expanding its geographic spread.

Ontario Ministry of Agriculture, Food, and Rural Affairs (OMAFRA) has been using pheromone trapping across the province since 2019 and has confirmed moth sightings as far as Hamilton, Milton and Niagara this past year. This pest is of particular concern for our landscape staple, boxwood (Buxus spp.), although burning bush (Euonymus alatus) and Japanese spurge (Pachysandra terminalis) have also been known to act as hosts in Asia and Europe. Control of this pest is critical in the caterpillar life stage as it can cause substantial defoliation. Larval control significantly aids in curbing the spread, as the adult moth can travel as far as 10 kilometres laying 10-20 eggs in each cluster.

From September to May, the larvae can be found overwintering inside an inconspicuous white webbed hibernarium. Alternatively, there may be individual leaves webbed together where the tiny black headed green larva can be found. In mid-late May, those larvae will begin feeding on the surface of the leaves, ingesting only the epidermal layer. Leaves that appear bleached or have a “window-pane” effect are a good indication of previous damage.

At later stages, these caterpillars develop black stripes along their bodies and can consume entire leaves, leaving behind only the margins as well as webbing and frass deposits (excrement). This may actually be less obvious than it sounds, so pulling the branches apart to check the interior of the plant is the best way to confirm their presence.

There can be as many as three generations a year, providing multiple opportunities to monitor and control the caterpillars. Historical observations suggest larval feeding occurs during the following time periods: May 30-June 15; July 15-August 10; and September 1-15. The biological control product Bascillus thuringiensis (Trade names: Dipel 2X DF, Bioprotec and XenTari) has been registered for use in Canada, but should only be applied by a licensed technician. Evaluating larval kill three to five days post-application will determine if a repeat treatment is warranted. 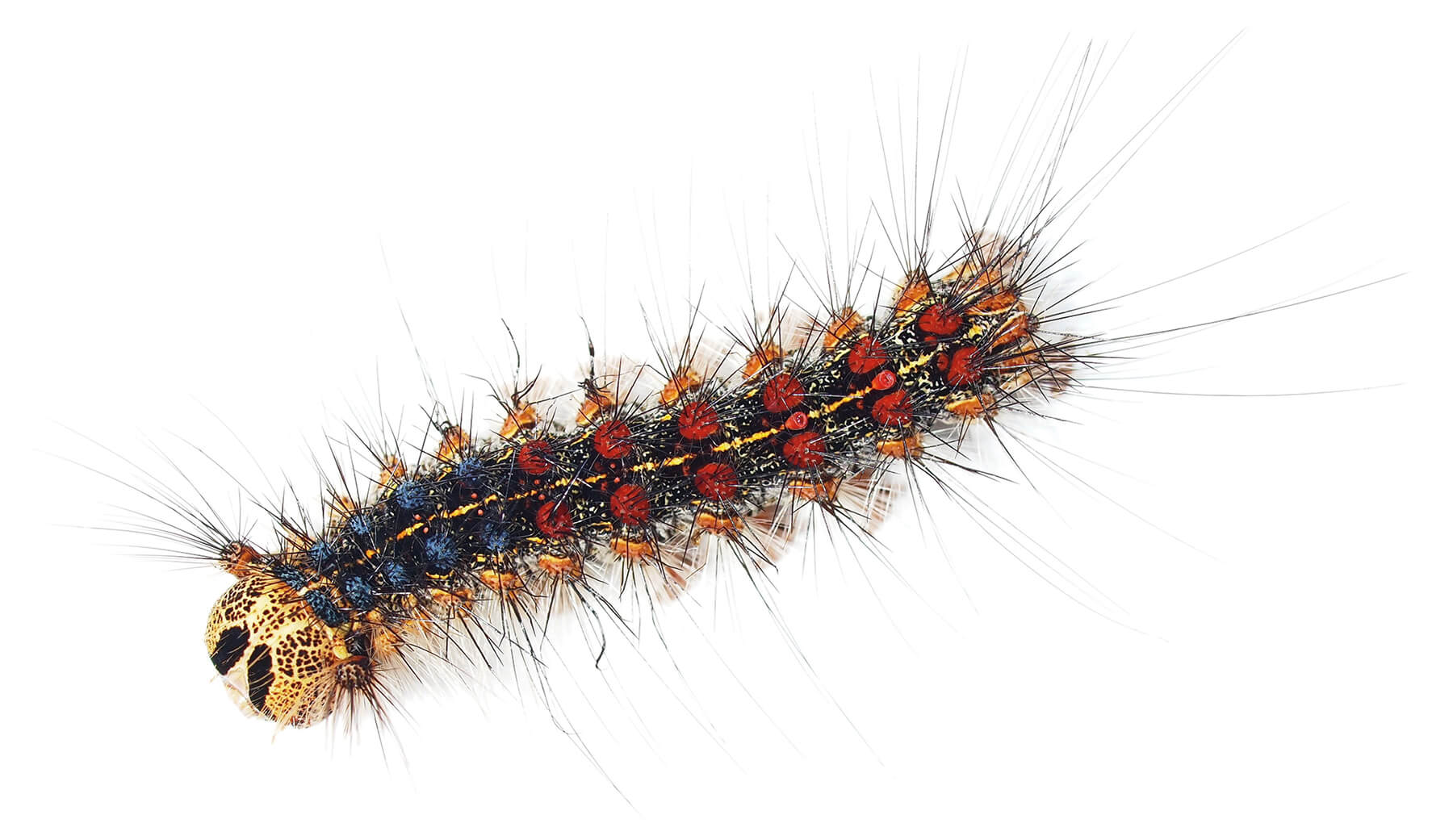 Fig. 2 Formerly known as gypsy moth, LDD moth has received significant media coverage as their spread and rapid defoliation has been evident across Ontario in recent years. The August 2021 edition of Landscape Trades magazine featured an article entitled “Appetite for Destruction” which provided excellent recommendations on suppression and control measures.

The tan coloured egg masses can be found on tree trunks and the undersides of branches, but may also be hiding on outdoor furniture, plant pots, vehicles and landscape equipment. Present from late summer to early spring, these masses should be carefully removed and destroyed by soaking in a bucket of soapy water. This will help prevent mass hatching in late April-early May when the tiny, black caterpillars may be seen dangling in the wind by a small thread, looking to land on a suitable food source. These young larvae feed mostly during the day, and it is at this stage where pesticide applications should be targeted.

The biological control product Bascillus thuringiensus (same product as used for box tree moth control) is very effective at this life stage. Later stage caterpillars have five pairs of blue dots followed by six pairs of red dots along their backs and their head capsule changes from black to yellow (Fig. 2). At this stage, they are no longer susceptible to biological pesticide applications, so alternative control measures should be implemented such as burlap bands, sticky traps and manual removal.

Once the caterpillars cease feeding in June-July, they will look for a protected area to build their cocoons. The dark brown-purplish pupal cases are often found near their fuzzy shed skins in crevices of thick bark or on the underside of branches or leaves. They may also be found on furniture, rocks, pots, wheel wells or bumpers.

Manual removal of pupae can help reduce adult moth emergence in July-August and subsequent egg laying opportunities. The females are a white, fuzzy, flightless moth that can sometimes be found congregating in groups laying their egg masses.

Fortunately, there is a glimmer of hope in the battle against this devastating defoliator in the form of naturally occurring biological controls. Along with an introduced wasp species that parasitizes the LDD eggs, there are fungal and viral pathogens that have proven to help control the caterpillar life stage. 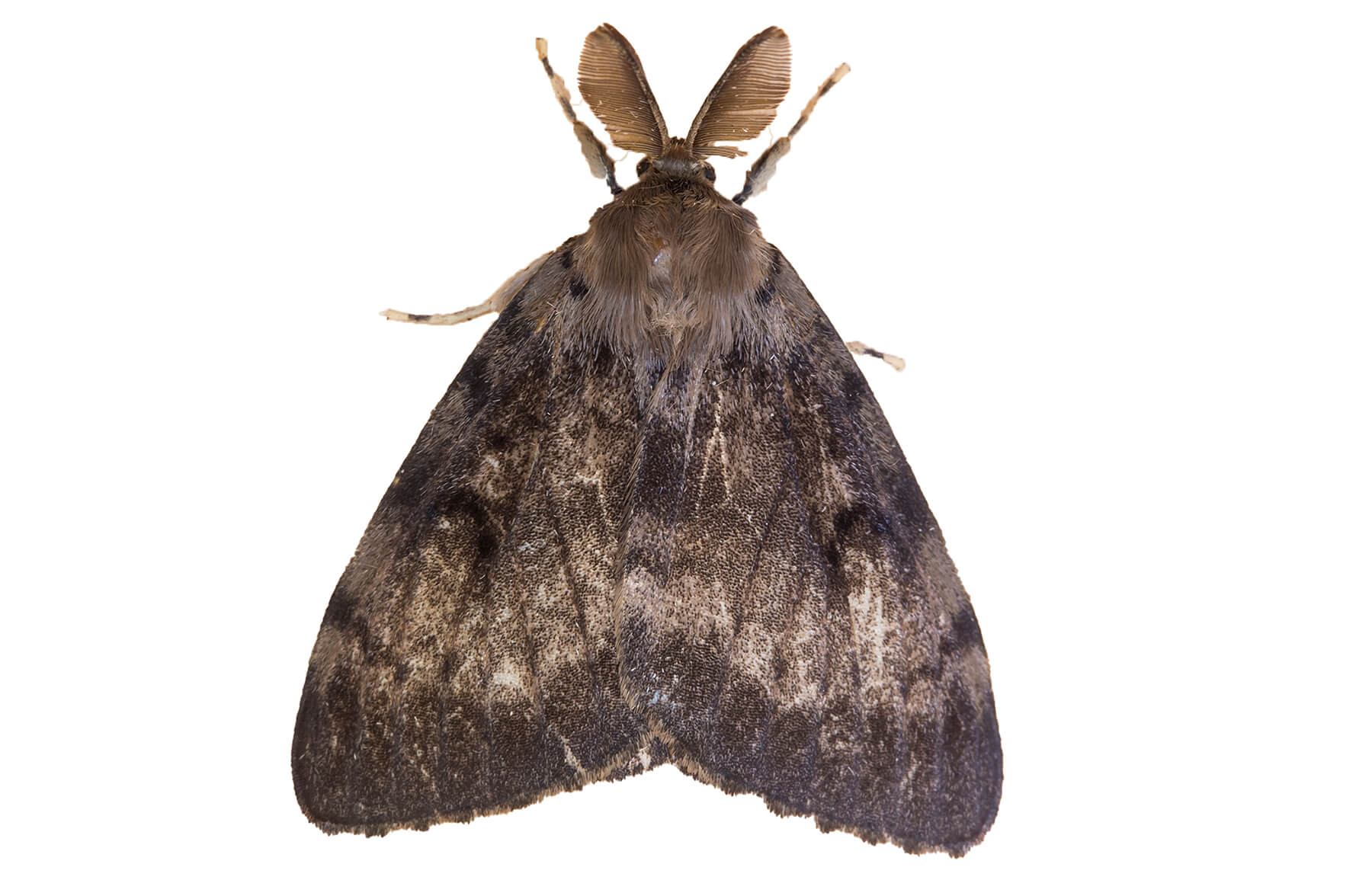 Emerging threats on our doorstep 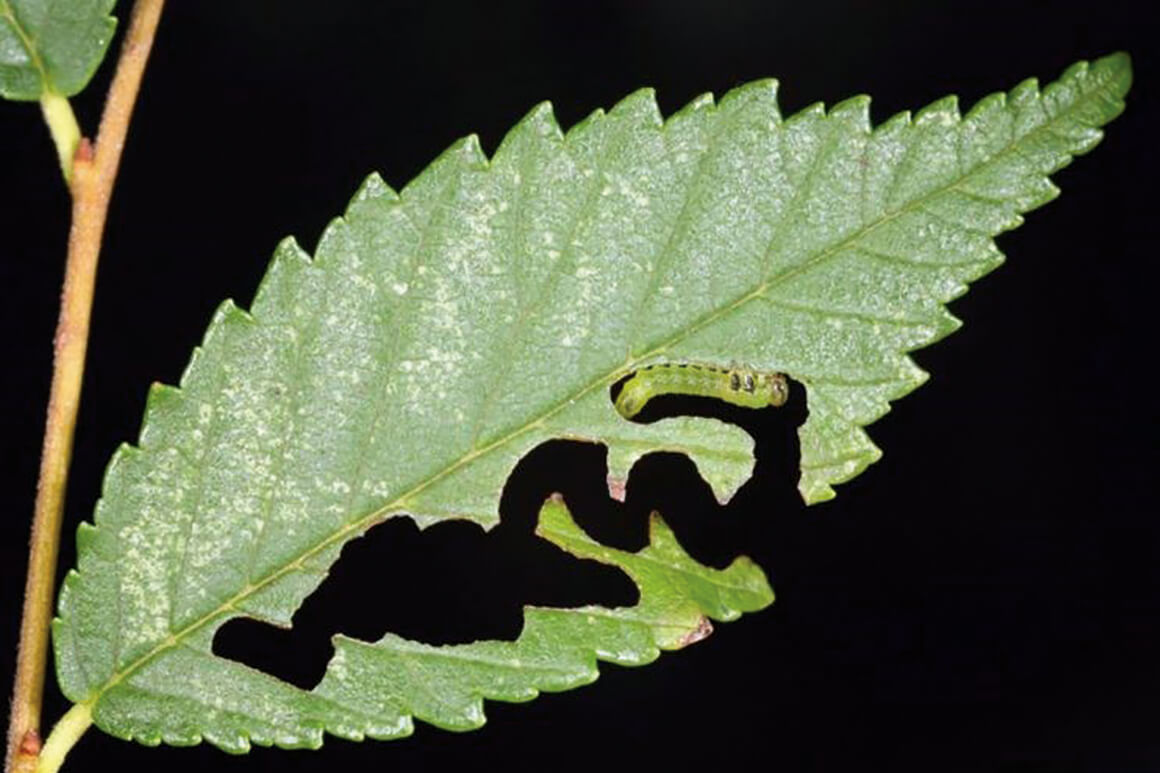 Fig. 3 Elm zigzag sawfly gets its name from the distinct zigzag damage caused by the early stage larval feeding (Fig. 3). As the larvae mature, they can consume entire leaves, obscuring their initial signature characteristics. Significant defoliation, branch dieback and crown thinning can occur in elm trees (Ulmus spp.) at any stage. There may be as many as six generations per year, allowing this pest to continue feeding from May-October.

In summer, the pupa spins a light lattice-like cocoon on the underside of leaves, branches and shoots and emerges as an adult in four to seven days (Fig. 4). Flagging and branch mortality in the upper canopy is a good indication of high infestation levels. The stress from this feeding damage, although not typically fatal, can significantly increase the vulnerability to other diseases such as Dutch elm disease.

The first reported sighting in North America was in Sainte-Martine, Que. in July 2020, but as of October 2021, there have been almost 200 iNaturalist observations in Ontario as far as Ottawa and Brockville. This pest is of particular concern as it can survive winter temperatures as low as -30 C and as an adult can travel up to 90 kilometres per year. It is more important than ever to increase the awareness of this pest, as it has the potential to cause serious and irrevocable damage to the biodiversity of our forest ecosystems. 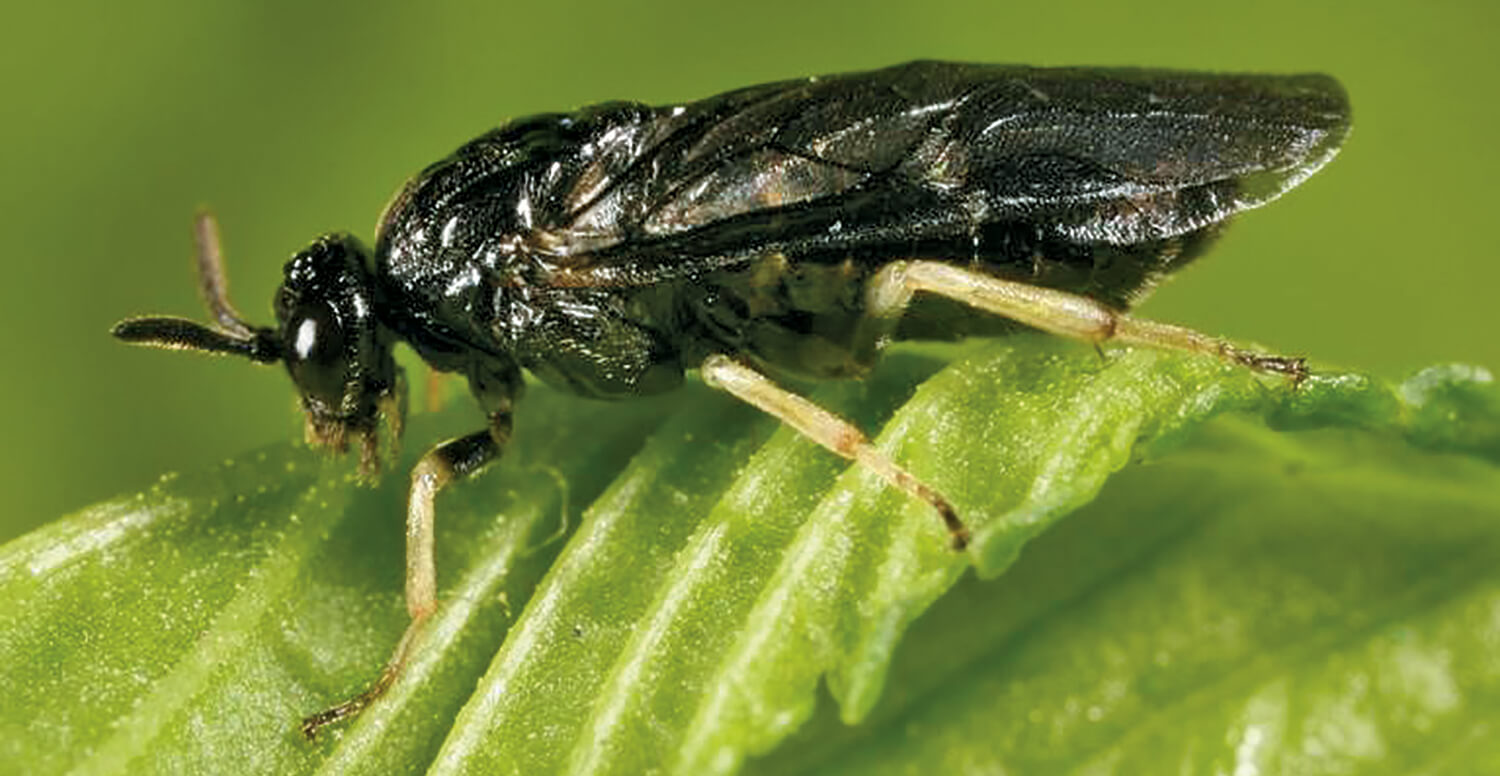 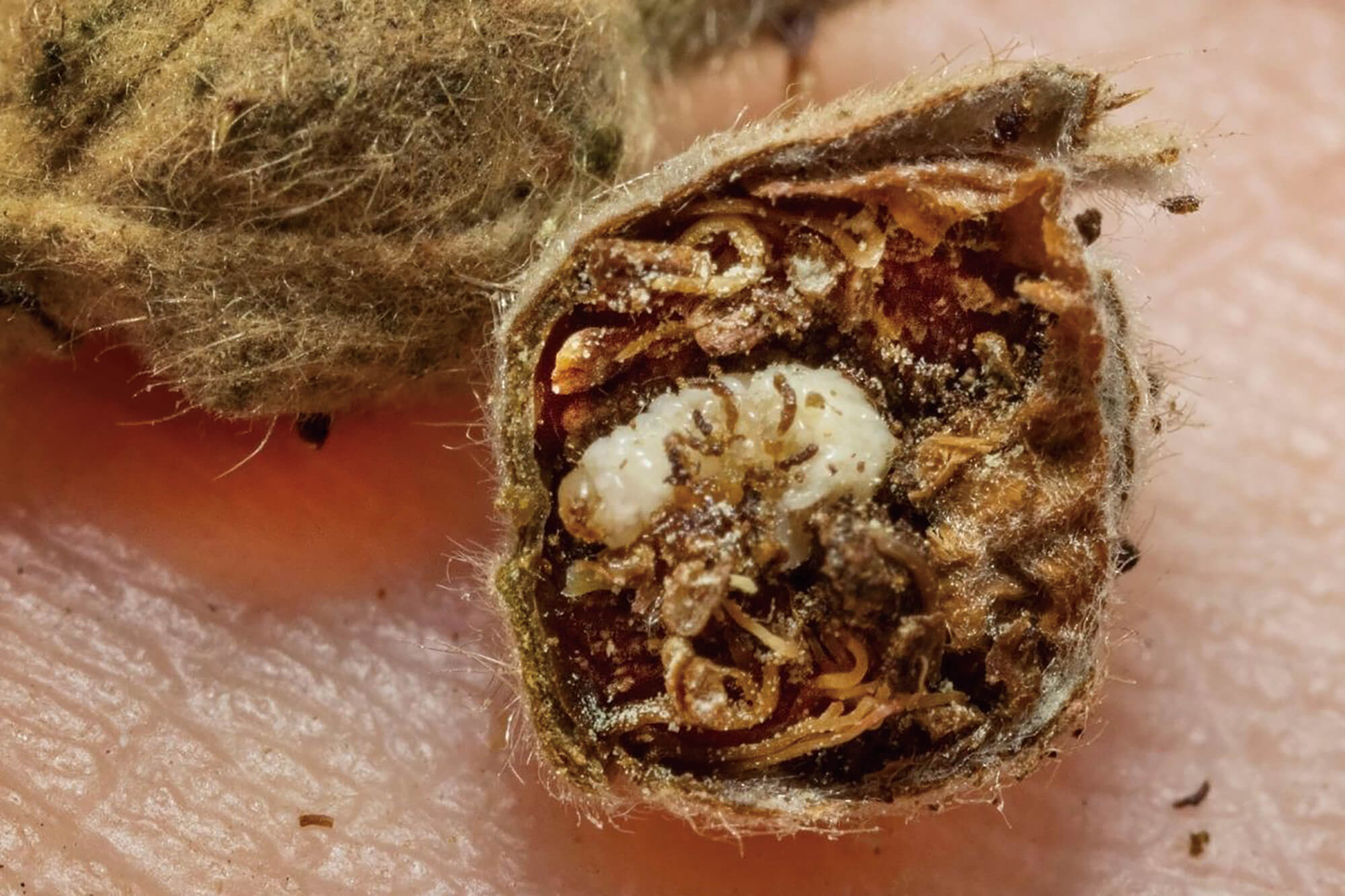 Fig. 5 Strawberry blossom weevil is a small, black, snout beetle, known to cause damage to strawberry, raspberry, rose and blackberry flower buds. The adults become active in spring when the female lays her eggs inside the developing bud.

The white legless grubs feed and develop inside the bud, (Fig. 5) emerging as adults about a month later. Both male and female adults create feeding punctures along the flower stalk, causing withered flowers and aborted fruit set. Occasionally, the female will lay her eggs in open flowers, where the resulting larvae cause scarred, rotten, malformed and ultimately unmarketable fruit. Yield losses can vary among crops, but some reports suggest that strawberry production can be reduced by up to 90 per cent, and in roses, as high as 80 per cent damaged buds were reported.

The first North American detection was in 2019 in Abbotsford, B.C., and it has since been confirmed in wild hosts throughout the Fraser Valley and metro Vancouver. Strawberry blossom weevil adults have also been found feeding on pollen and nectar of such plants as dandelion, buttercup, mullein, oxeye daisy, and astilbe. The CFIA is currently assessing the level of economic and environmental risk of this pest and as of September 2021, has issued a federal regulation order on rubus, fragraria and rosa plant production and exports to the U.S. 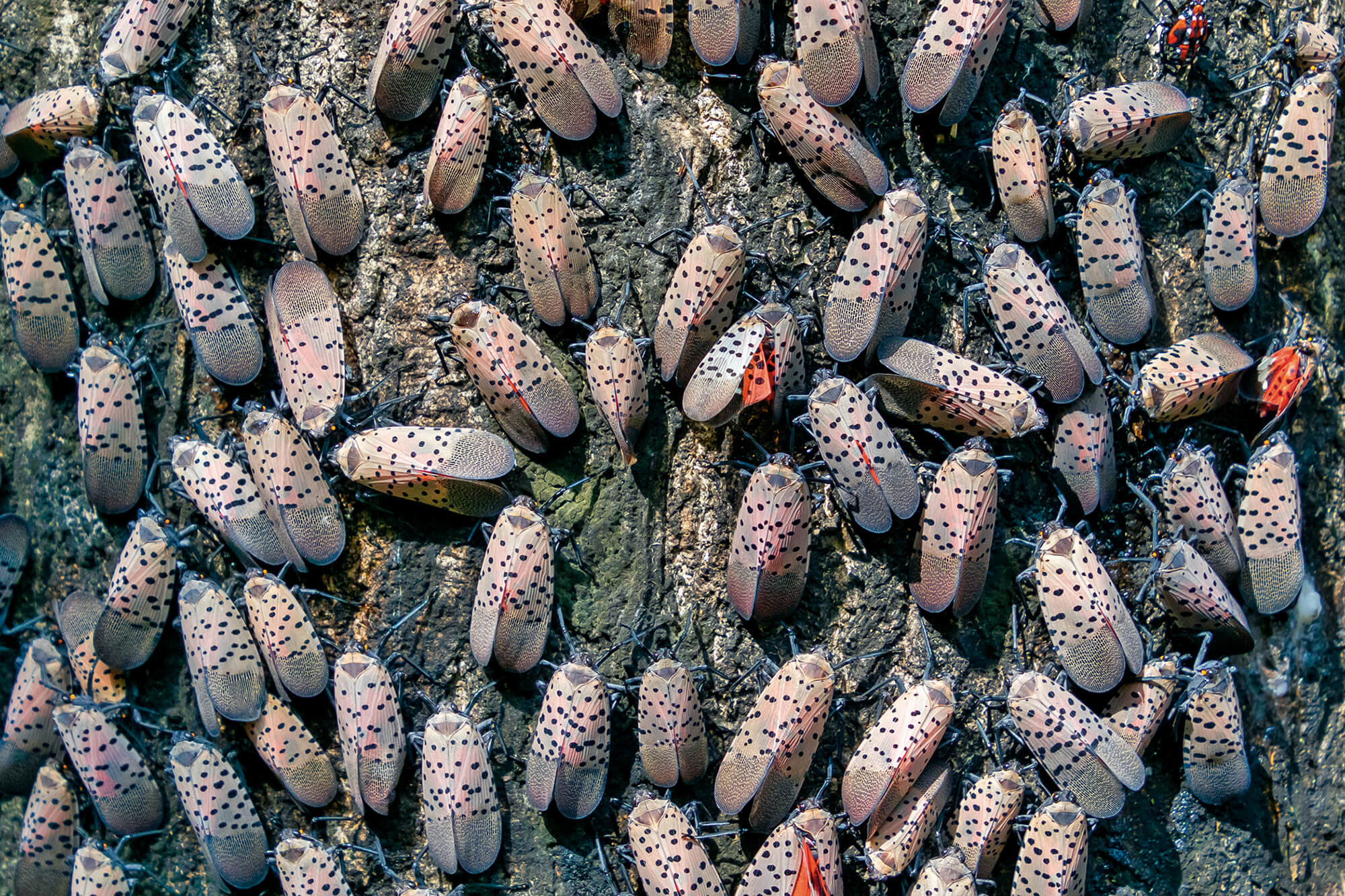 Fig. 6 Spotted lanternfly is a uniquely coloured planthopper that can easily be distinguished from other pests in the landscape. The adults are approximately one inch long and hold their grey coloured forewings with distinct black spots like a tent over their body, hiding the bright red portions of their hind wings (Fig. 6).

The first three stages of the spotted laternfly are similar in appearance as the nymphs are mostly black with white spots. The fourth stage before becoming an adult is black and red with white spots. The adults and immature nymphs congregate in large swarms and use their piercing/sucking mouthparts to feed directly on the sugary tissues of young stems and foliage. This can lead to a heavy buildup of honeydew, which in excessive amounts can cause the growth of bacterial and fungal moulds to occur at the base of the plant. In late summer, the adult females lay eggs inside a grey, mud-like mass.

Although they prefer to lay eggs on their favourite host, tree of heaven (Ailanthus altissima), the masses have also been found on stones, furniture, firewood, pallets, boats and vehicles. Spotted lanternfly will also feed on over 70 other tree species, including maple, oak, poplar, willow, walnut, and pine. However, stone fruits, apples and grapes are especially preferred.

It has not yet been identified in Ontario, but as of 2020, it has been detected across the Niagara border in New York State. This close proximity to our fruit-tree and viticulture region is of particular concern as this pest poses a significant economic threat.

What can you do?

There are several ways to help in the battle of limiting the spread and potential damage caused by these invasive species. By becoming informed and sharing this information with your coworkers, employees, friends and family, you can help increase awareness. It is important that we are all aware of how these pests increase their spread and eliminate those activities, such as moving firewood and plants. Last, but certainly not least, report any sightings and observations immediately to the Canadian Food Inspection Agency at inspection.gc.ca.