Share
Tweet
Mail
Horst Dickert passed away at age 77 on May 7, 2010, but the legend of “Dynamite” Dickert lives on. When staring in the face of over-compacted soil, as the moniker implies, Dickert preferred sticks of dynamite instead of shovels or backhoes.
Horst moved to Canada in 1953, starting out as a market gardener. He landed his first landscaping job at Cedarvale Tree Experts before moving to RLink Associates, where he gained experience installing large fountains.
When RLink closed its doors for good, Dickert landed a job as a foreman working for Bill Schrieber and John Northwood at Lakeshore Landscaping.
Lakeshore was responsible for the landscaping at Expo ’67. The company was tasked with putting together a mass tree-planting. The problem with the soil was that not only was it over compacted, there was also four feet of frost.
Under those conditions, Dickert said his crew was barely able to plant one tree each day. However, Lakeshore needed to plant 80 trees per day to meet their deadline for the springtime international event. 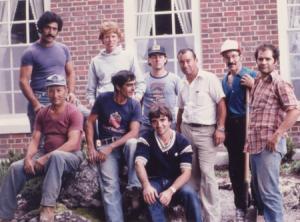 Lakeshore Landscaping staff photo
“I said ‘I can’t continue like that anymore. I can’t afford to plant only one tree a day,’” Dickert said in a 2006 interview with Horticulture Review.
“We have to plant as much as 80 trees per day in order to make money and we can’t be sitting here fussing around with one tree,” Dickert continued. “So I proposed explosives. Everybody said ‘you’ve got to be nuts. This is a federal project. You’re never going to get the permit.’
“I said ‘We’ll see a about that.’”

Dickert spoke to the two army colonels in charge of Expo ’67. When he was asked if he had any experience with dynamite, Dickert told them about how he used explosives to speed up the process of planting massive, 500-tree community orchards after the Second World War.
Dickert was given permission to proceed. Dynamite was placed 5 feet underground -- 30 inches below the frosted top soil. Dickert then added about one yard of loose top soil atop the buried dynamite.
Loose top soil “couldn’t get any momentum,” Dickert said, which prevented any rock around the explosion from spraying like shrapnel.
“Using explosives was beautiful,” Dickert said.
“It gave us a beautiful hole in the clay soil. It was a hole about 12 feet across all ripped loose,” he continued.  “Before you needed a pick and a shovel to get in there, and then all of a sudden you could stick a spade up to the handle because everything was loosened up.”
Each dynamite explosion not only saved tremendous amounts of time, it also produced nitrogen to fertilize the trees.
Dickert’s unconventional tree-planting method landed him a teaching job at Humber College. His class, Tree Planting with Dynamite, was so popular that engineers from the Ontario Ministry of Natural Resources and Ontario Hydro were also in attendance to learn how to dig holes with explosives.
His class did all kinds of tests. Students would make three separate holes with a backhoe, a shovel, and a stick of dynamite, and then fill each crater to the brim with water.
“We came back days later. In the hand dug hole there was still water sitting there. In the hole dug with a backhoe there was still a little bit of water sitting there,” he said. “In the exploded hole there was no water left. It all disappeared where it was supposed to go.”
Dickert worked his way up to be president of Lakeshore Landscaping during his 23 years with the company. He then was hired as a consultant for many jobs including the Toronto Music Garden at the Harbourfront Centre. 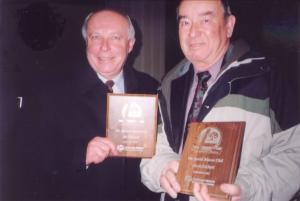 When Bill DeLuca's company, Aldershot Landscape Contractors, bought Lakeshore Landscaping, Horst Dickert (right) was promoted to president of the company.
Dickert was part of the Ontario Landscape Contractors Association in the ‘60s before Landscape Ontario was created in ‘73. He sat on the Landscape Ontario Specialty Education committee as well as on the Advisory Committee to the province of Ontario for universities and colleges. While on that committee for 10 years he helped developed the provincial curriculum for apprenticeship programs.
Currently, landscape apprenticeship programs require 4,000 hours over two years.
“We always pushed for (a requirement of 6,000 hours over three years) to train good landscapers or good nurserymen,” Dickert said.
“Eventually, it was shot down by the government. They said ‘Six thousand hours is absolutely too much,’” he said. “I always said ‘six thousand hours is nothing. That’s only the beginning!’”

One of the most important things about Horst's life is his legacy of benefit that now lives on through the memories of those he influenced and touched. It is fitting that the family has started a fund in the Ontario Horticultural Trades Foundation to be used for an Award or Scholarship in the name of Horst Dickert. It will promote the use of native plants. You are welcome to participate in that effort. Charitable donations for this purpose can be made to the Ontario Horticultural Trades Foundation. Email kathleen@landscapeontario.com for more information.
Written by Stuart Service, with files from Tony DiGiovanni and Chris Andrews
Share
Tweet
Mail