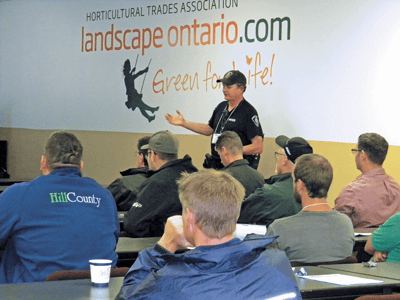 The 2018 edition will focus on the conference portion of the event, and will also have a tabletop exhibit area, featuring snow and ice removal equipment, technology and affiliated products.

Planned conference topics will include a legislative update relating to the snow and ice industry, a Smart About Salt overview, a detailed session on the Landscape Ontario Standard Form Snow and Ice Maintenance Contract, claims management, civil litigation issues and an in-class commercial vehicle inspection demo.

Conference passes include in-class sessions, lunch and exhibits.  Registration is now open, at $85 for provincial trade association members and $115 for non-members. After Sept. 14, prices go up. Details on the event and registration can be found at Snowposium.ca.

“Under the authority of the Pest Control Products Act and based on the evaluation of currently available scientific information related to pollinators, products containing imidacloprid are being proposed for continued registration in Canada, and risk mitigation measures are required to be in place to further protect pollinators,” stated the Proposed Re-evaluation Decision PRVD2018-12, Imidacloprid and its Associated End-use Products: Pollinator Re-evaluation.

Imidacloprid is used by agricultural workers and licensed applicators to protect crops from insects. It can be applied to the ground, leaves, seeds, and as a tree injection.

This pollinator assessment is the last piece of the re-evaluation of imidacloprid. In November 2016, Health Canada published a Proposed Re-evaluation Decision for imidacloprid that assessed health and environmental risks but did not include an assessment of impacts on pollinators. In that document, Health Canada proposed phasing out all agricultural uses and many other outdoor uses of imidacloprid over three to five years for the protection of the environment.

This 2018 proposed regulatory decision is the pollinator risk assessment. It considers all additional information since Health Canada’s 2016 Re-evaluation Note, Re-evaluation of Imidacloprid – Preliminary Pollinator Assessment. It does not affect the 2016 proposed decision on agricultural and other uses. Consultation is open until August 29, 2018. To comment visit: www.canada.ca/en/health-canada.

Fredericton inoculation project
The City of Fredericton, N.B., announced plans for an inoculation pilot project to slow the spread of Dutch elm disease on city-owned trees.  Starting in May 2018, all elm trees greater than 30 centimetres and located within pre-determined trial areas of Devon, and the downtown east and west plat, as well as several larger elms of significance located in parks on the north and south sides of Fredericton, were inoculated with DutchTrig, a bio-control vaccine for elms.

DutchTrig is a biological and organic control agent consisting of spores of the Verticillium fungus that, once injected, activates the elm tree’s natural defense mechanisms. The inoculation process can be most easily compared to that of the influenza virus vaccination process in humans. Instead of making healthy elm trees sick, the inoculation ensures that elms produce a healthy immune response to infection from Dutch elm disease.

Arborists will apply the vaccine by micro-injecting a small amount of the formula into the elms this spring, when the trees are at 25 per cent or more in leaf development. The treatment is non-invasive, requires no drilling, and is completely safe for people, animals and the surrounding environment as it uses only plant-based pathogens associated with Dutch elm disease itself.

The infection and survival rates of the inoculated trees will be compared to non-treated elms in other areas of the city throughout the summer. Results will then be recorded for analysis in July, during the City’s annual Dutch elm disease survey.

Municipalities using the inoculation have experienced a dramatic decrease in infection rates, with some communities showing 99 per cent of injected elms successfully protected against Dutch elm disease. A successful vaccination program will preserve the number of elm trees in the city and reduce removal and replanting costs, leading to more efficient and self-sustaining urban forestry programs.

EU expands neonicotinoid ban
The European Union Commission recently voted to ban all outdoor uses of neonicotinoid insecticides, expanding upon a ban initially put into place in 2013. The expanded ban now prohibits the use of clothianidin, imidacloprid, and thiamethoxam to all field crops, because of growing evidence that the pesticides can harm domesticated honeybees as well as wild pollinators. 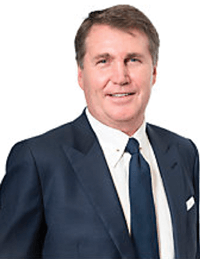 Caterpillar appoints CFO
Caterpillar, the Peoria, Ill.-based equipment manufacturer, announced its board has appointed Andrew Bonfield as chief financial officer (CFO). Bonfield brings more than three decades of financial expertise to the role, most recently serving as Group CFO and board member of National Grid, a British multinational electricity and gas utility company. Prior to Bonfield’s eight years at National Grid, he was CFO at British confectionary company Cadbury. Since 2010, Bonfield has been a non-executive director and chair of the audit committee of British retailer, Kingfisher. Bonfield also chairs the 100 Group, which represents finance directors of the top 100 U.K. companies listed on the London Stock Exchange. Bonfield is a chartered accountant who holds a bachelor’s degree from the University of Natal in Durban, South Africa.

Feds fund climate change mitigation  The federal government is allocating funds to “help reduce the impacts of climate change and better protect Canadian against natural disasters.” On May 17, Amarjeet Sohi, Minister of Infrastructure and Communities, launched the Disaster Mitigation and Adaptation Fund (DMAF), a 10-year national program that will invest $2 billion in projects “that help communities better withstand natural hazards such as floods, wildfires, seismic events and droughts.” DMAF will support large-scale infrastructure projects with a minimum cost of $20 million like diversion channels, wetland restorations, wildfire barriers and setback levees. These projects will safeguard public health and safety, protect people’s homes, make sure access to essential services is not interrupted, the government explained in a media release. For the full eligibility list and other program details, visit the www.infrastructure.gc.ca.

Lyme disease cases increase
Cases of Lyme disease in Canada are rising as blacklegged tick populations grow and expand, according to health officials.

“What we’re seeing is definitely a range expansion, Robbin Lindsay, a research scientist with the Public Health Agency of Canada (PHAC) told Global News. “This is not a problem that’s getting smaller, it’s tending to get larger in terms of the range of the tick.”

Around 20 per cent of blacklegged ticks carry the bacterium that causes Lyme disease, Lindsay explained. Lyme disease causes symptoms including fever, a rash and fatigue. Left untreated, it can cause facial paralysis and heart and neurological disorders. There were 1,479 cases across Canada in 2017, something PHAC calls a “significant national increase” of nearly 50 per cent compared to 2016. 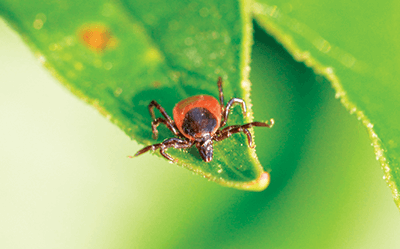 Blacklegged ticks are typically found in wooded areas with lots of leaf-litter, which they can hide under to escape the sun, Curtis Russell, an entomologist with Public Health Ontario, told Global News. The best way to prevent tick-borne disease is to not get bitten, experts say. When in a wooded area that might have ticks, stay in the middle of the trail, Russell said. The bugs can’t jump onto you, they only grab on if you brush against them.

“Wear long sleeves, light coloured clothing with everything tucked in. That way you have a better chance of noticing the tick on you,” Russell added. You should also wear a bug repellent containing DEET or picaridin.

Research released on LED for horticulture
The Lighting Research Center (LRC) at Rensselaer Polytechnic Institute in Troy, N.Y., released a new report on energy and the economic performance of LED horticulture lighting products. The report looked at, “The framework includes the analysis of 11 luminaire-specific metrics and five application-specific metrics, which provide growers with the best available information regarding any given horticultural luminaire’s performance. The LRC then used this framework to test and evaluate 13 horticultural luminaires, including LED, two HPS, and one MH (metal halide) product.” It should be noted, though, the testing did not include growing crops and evaluating lighting based on crop growth. The report can be read at: www.lrc.rpi.edu/programs/energy/pdf/HorticulturalLightingReport-Final.pdf. 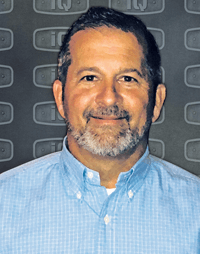 IQ Power Tools hires training manager
IQ Power Tools, the Perris, Calif.-based manufacturer of power tools with integrated dust collection technology, appointed Vince Hollis as its national product training manager.​ ​In the position, Hollis will be in charge of product information and training for both dealers and field representatives. Additional responsibilities include the role of product trainer at in-dustry shows, as well as participating in IQ’s regional training events​ ​partnering with various associations. Hollis​ ​began with IQ in 2016 as the Southeast regional sales manager.

Research released on LED for horticulture The Lighting Research Center (LRC) at Rensselaer Polytechnic Institute in Troy, N.Y., released a new report on energy and the economic performance of LED horticulture lighting products. The report looked at, “The framework includes the analysis of 11 luminaire-specific metrics and five application-specific metrics, which provide growers with the best available information regarding any given horticultural luminaire’s performance. The LRC then used this framework to test and evaluate 13 horticultural luminaires, including LED, two HPS, and one MH (metal halide) product.” It should be noted, though, the testing did not include growing crops and evaluating lighting based on crop growth. The report can be read at: www.lrc.rpi.edu/programs/energy/pdf/HorticulturalLightingReport-Final.pdf.

Color Spot files for bankruptcy protection Temucula, Calif.-based Color Spot Holdings filed for Chapter 11 bankruptcy protection on May 29, 2018 in a Delaware court. The grower primarily produced annuals and woody plants, as well as some tropical patio plants. In the filing, the company states that after years of bad weather and sales losses, it needed to make a quick all-assets sale to deal with $147 million in debts. In 2017, Color Spot attempted to deal with its financial problems by closing four of its 13 nurseries, laying off 30 per cent of its workforce, and attempting to sell its Texas-based Southwestern division. However, with $83 million in debt due early June 2018, the measures were not enough to prevent the bankruptcy.

Toro announces staff changes
Toro recently announced a number of promotions, including Rick Rodier’s appointment to vice president of Toro’s Commercial Business. Rodier, a 31-year veteran of the company, succeeds Brad Hamilton, who was promoted to group vice president, in charge of Toro’s Commercial and International Businesses. Additionally, Dan O’Brien, CSE, was promoted to director of sales, North America for Toro’s Commercial Business, a position previously held by Jim Heinze, who recently retired. Another recent organizational change is Grant Young’s promotion to managing director, global product development for the Toro Commercial Business. Young has also held a number of management roles across multiple divisions at Toro, including the Residential and Landscape Contractor Business in managing partnership efforts with The Home Depot.