Share
Tweet
Mail
Anyone who has ever driven during rush hour on two of Toronto’s busiest highways knows all about the stop-and-go conditions. Thanks to Landscape Ontario member Caroline de Vries, the scenery along those two major routes is now a bit more pleasant during the spring months.

In June of 2009, Nick Close of the Ministry of Transportation (MTO) contacted Landscape Ontario inquiring if a member owned a bulb planting machine. It turns out Caroline de Vries at TradeWinds International Sales in Mississauga happened to have such a machine. Close had earlier received a call from an MTO director who had driven by the mass plantings of narcissus along the Don Valley Parkway in Toronto that spring. He was inquiring if a mass planting was something that the MTO should consider for its Highway Beautification Program.

The swath of daffodils on the Don Valley parkway was planted by de Vries in the fall of 2008. She met with Nick Close and Natalie Rouskov, project manager for the MTO, Toronto Region, and Tom Potts, operations manager for Miller Landscape. The site chosen was at the basketweave intersection of the Don Valley Parkway, 401 westbound and 404. There is an elevated piece of land with southern exposure that sits high enough to be seen from all directions. It was agreed upon that this site would be planted that fall.

Caroline de Vries says that the mix consisted of 10 to15 mid- to late-blooming varieties of narcissus. “By mixing the varieties, it extends the blooming period. We also added 10 per cent Red Apeldoorn tulips to the mix, just to add an additional visual boost to the area.” The evidence of that boost can be seen on the cover photo of this issue. Over 42,000 bulbs were planted in less than four hours. “We lost about a half-hour to a flat tire,” notes de Vries.

The planting-machine is a special device imported from Holland. A one-person operation, it allows cost-effective mass planting of flower bulbs under grass with a striking result. The machine is a combination planter and tractor. A large container holds the bulbs, with at the bottom two belts to deliver the bulbs. Two vertical rotating knives cut the turf open, just before the plant feet. The feet dive into the ground and fold the turf open. At the same time the two belts release the bulbs, which fall into the soil and get covered. The machine also puts the turf back in position with minimal damage. Driver assistance is required from one or two persons to handle the bulbs and to direct the planter to the exact location. The width of each plant foot is 45 cm.

Established by Caroline de Vries, TradeWinds International has been an importer and wholesaler of flower bulbs, bareroot perennials, nursery stock and garden products for nearly 20 years. For the next few weeks everyone has a chance to see the colourful result of that business, simply by driving along the 401 or Don Valley Parkway. 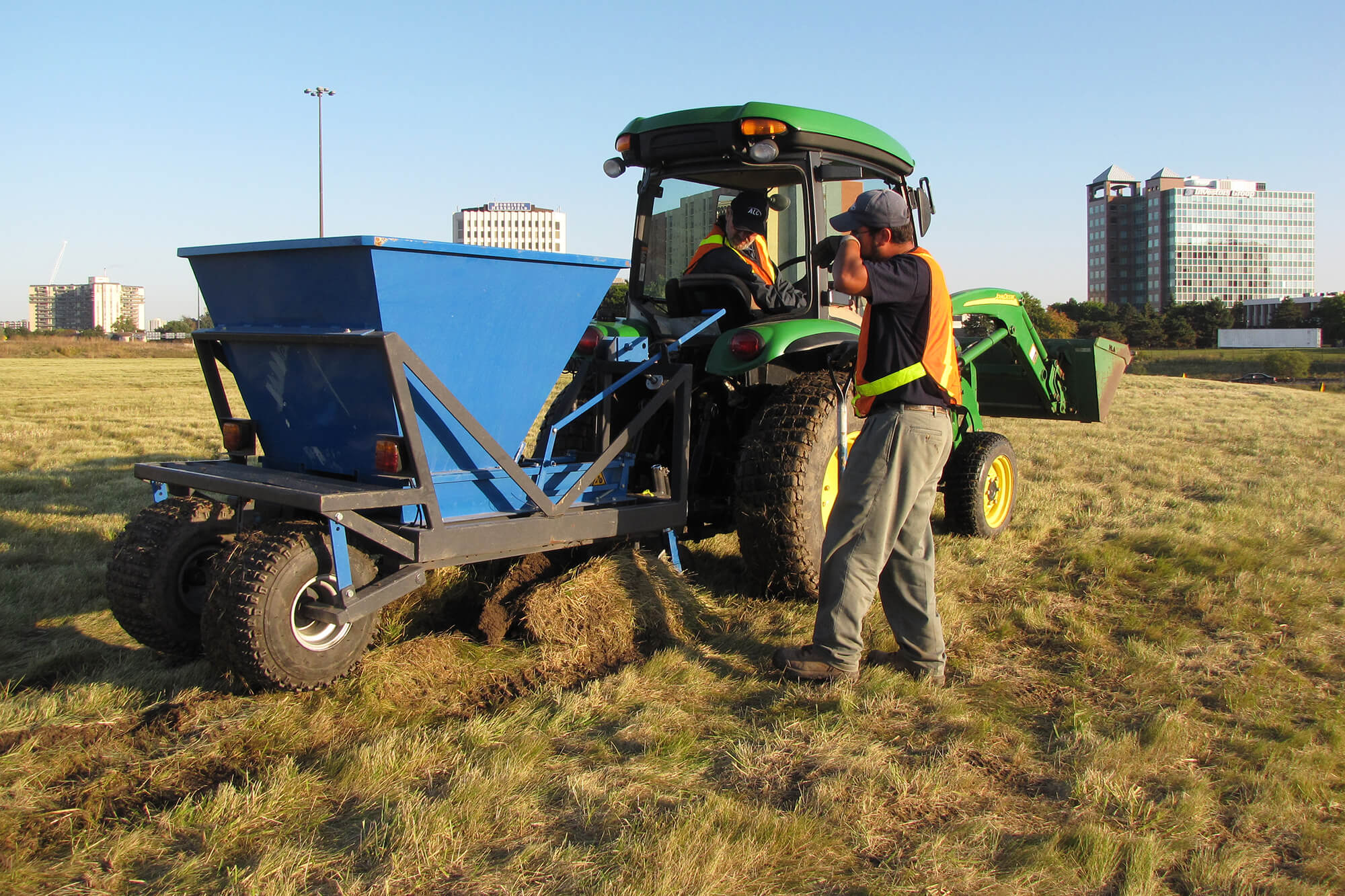