With a preacher’s heartfelt zeal, he inspired contractors to charge and prosper. Charles Vander Kooi spent a lifetime helping the landscape industry succeed, and his sudden passing in March left a big void.

Vander Kooi made his name as a landscape industry speaker and business consultant, travelling across the continent to inspire and educate. I interviewed him once in 2011, as he rode across Cleveland in the back of a cab. My notes look just as relevant today; during that recovery period he was telling contractors they could more effectively improve profits by looking at job costs, that overheads are not their problem. He said he felt better when things were a little tight, and more nervous when they were too good. Those quick-scribbled notes, pulled from my files, still testify to Vander Kooi’s energy.

Finding Canadian disciples was no problem. Contractors across Canada were pleased to talk about how “Charlie” helped turn their businesses around.

As a new business owner, Neil Pond of Urban Landscaping, Rothesay, N.B., heard CVK’s first New Brunswick speech in the early ’90s, and it changed his business. “I immediately implemented his systems using Excel spreadsheets, which I have kept and adapted over the years. Right now, I am looking at his books on my shelf, and the spreadsheet is open on my computer. He was one of the biggest influences on me and my company, and he got us on a path to avoid pitfalls.”
Pond remembers Vander Kooi good-naturedly dubbing a Canadian audience member ‘Billy-Bob Nigel.’ “He was such a good speaker because his numbers were all about people.” 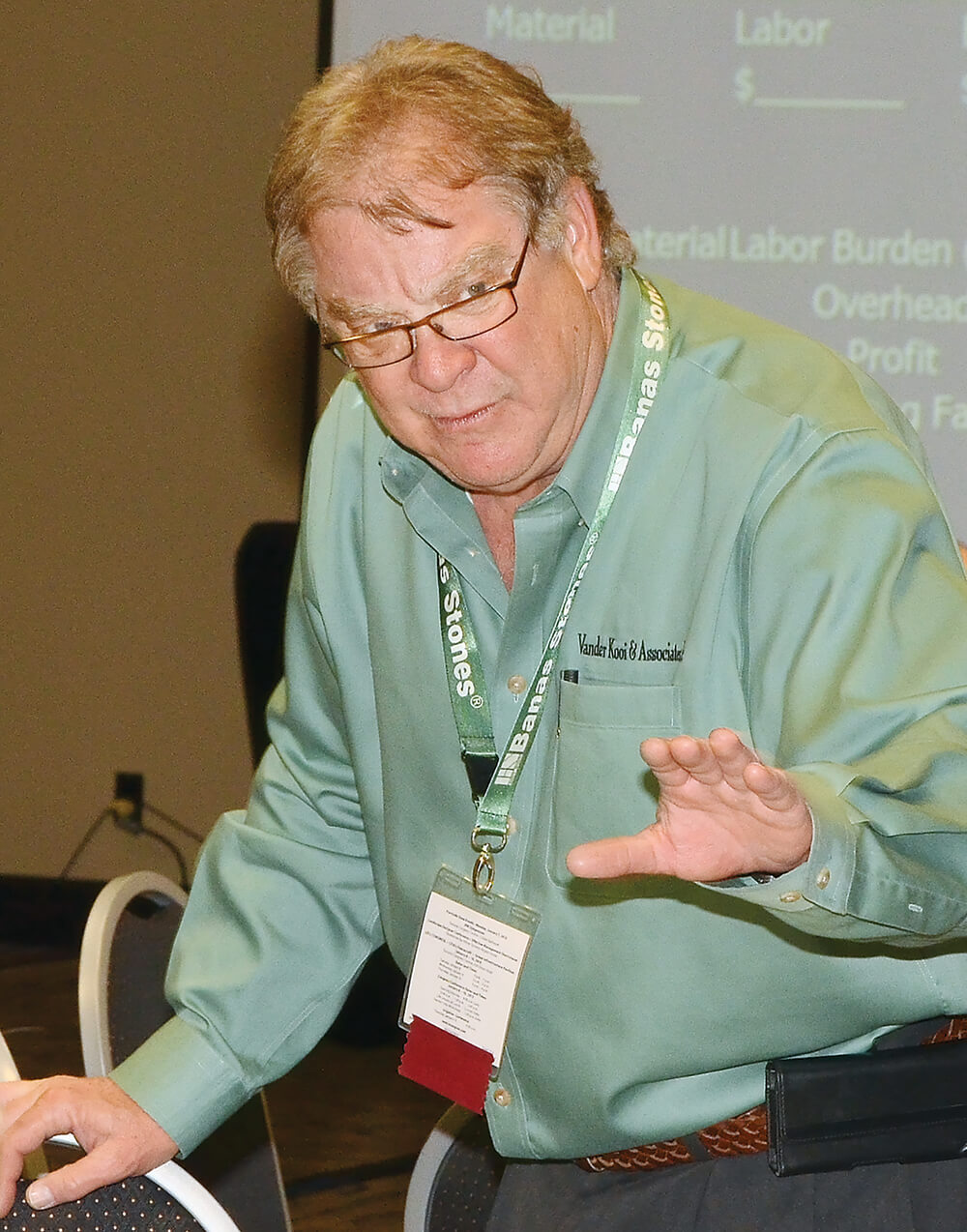 Charles Vander Kooi speaking at Congress 2013.
“I took a budgeting course put on by Vander Kooi’s organization shortly after starting up and it really was like getting an MBA for the landscape business in three short days,” said columnist, contractor and LMN founder Mark Bradley. “Chuck had an incredible influence on the industry, he was a legend in his own time — in my early days I took every chance I had to hear him speak. I even flew to the West Coast a few times to hear what he had to say! Chuck was a true gentleman, it was obvious how much he enjoyed teaching landscapers how to be successful business people.”

“Charlie taught me it’s my God-given right to charge for overheads,” said Tim Kearney, Garden Creations of Ottawa. Kearney remembers hearing Vander Kooi for the first time, and scribbling a yellow pad full of notes, leading to an epiphany on why no money was left in his company at the end of the year. “Charlie was fun, entertaining, hilarious. At that time my partner and I set ourselves apart as high-end by wearing ties and sport jackets. So Charlie called our company, “Garden Where’s-my-BMW Creations of Ottawa.” Kearney credits Vander Kooi with turning his company around to “where it made sense.”

“Charles had ways to make you remember his lessons,” said Kyle Tobin, LawnSavers Plant Health Care of Toronto. “The employee who went bad and will never work out was an Egg-sucking Dog.”
Ruth Olde of Blasig Landscape Design & Construction, Maple Ridge, B.C., said, “To me, he made the intimidating, dirty business of ‘business’ seem possible — even fun.  [He was about] making money — and how to do it! He was overtly passionate about the industry not seeing itself as ‘less than.’ I was always grateful for his perspective.”

Neil Pond remembers Vander Kooi being billed in the ’90s as the Billy Graham of Landscaping. Looking ahead, Vander Kooi’s legacy of saved landscape companies lives on.