Family business: The next generation


How did you come to be self employed? Did you inherit it? Start it yourself? Buy it? Your answer may explain your passion to keep the business going after you hang up your work boots.
In my case, it was 1981 and I was a Peel Region cop that wanted out of that fubarred judicial system, so as I patrolled Mississauga, I met and became good friends with Bill Inch, owner of Freemont Landscaping — a business he grew to be very big and successful. Bill bought it from a friend and local fireman, Bruce Wilson. Bruce then started Bruce Wilson Landscaping, and together with his son, has built that business into a very big and successful landscaping business. Because of these success stories, I left the force and started BP Landscaping & Snow Removal, and grew it to 100 employees.

I immediately landed a very big sodding job. I went to Cookstown, where I met another family business owner, Mel Smilsky of M. Smilsky Sod. He had two sons; Larry worked in the office and was taking over running the business. His brother Jim preferred to be in the field and behind the wheel of an 18-wheeler delivering sod. It was a great family fit for all involved. I was so impressed with their operation and equipment, big red trucks with yellow lettering, that I copied their colours for my trucks. 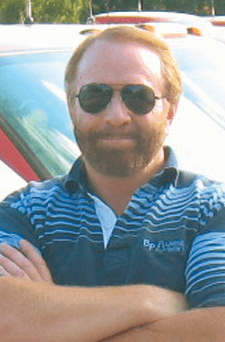 My first winter was not as busy as hoped, so I set up a camper trailer in a friend’s gas station lot, and sold Christmas trees for two weeks in December of ’81. Good cash flow. During the days in that trailer I typed up letters on a Smith Corona to big local companies, looking for work in the coming summer. And I was pleasantly surprised with the success I had. The biggest came from another family-run business — Carlo and Orey Fidani, owners of Orlando Corporation.

I was told that 80 per cent of new businesses don’t make it to Year Five, so I was driven to make it past five years. How hard could that be? My experience was from what I did the day before, literally flying by the seat of my pants, standing on my head for every client. Then I put up our company slogan: “If we don’t take care of our clients, someone else will!” The next 10 years were controlled chaos, with challenging cash flow at best. At that time I was the father of two young boys who remember all the fun we had — like selling our family snowmobile and then my classic old car to meet payroll. Yep, the joys of being the owner. These are some of the best things my kids could have seen. Brian Jr. and Jamie would help me on the weekend fixing equipment, checking on job sites... so they grew up very involved in this business.

Today, after being in business 37 years, my boys are now in it full-time. Brian prefers to work in the field with equipment, while Jamie chose to help in the office. Jamie remembers the issues I had when he was young, so he wants to, in his words, “Fix all the things you are not doing right.” I have to agree, he is doing just that.

Now, at 63, I am working 6 a.m. to 1 p.m. Jamie is 27, same age I was when I started the business, and he is working 6 a.m. to 6 p.m. He is married to a wonderful girl, Terri-Ann, and they have nine-month-old Jack, who, if this business continues, will be third generation — fingers crossed. Backing away from the business is certainly more difficult than I expected, so if you should call this company in three years, when we celebrate 40 years in business, it is quite likely this 66-year-old dinosaur may just answer the phone.

P.S.: I take my hat off to all family-run businesses. Kudos to all involved.