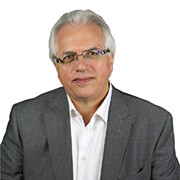 In everyone’s life there are special individuals of influence. They change your perspective, provide guidance, mentor and inspire. They encourage, support and challenge you. They act as a role model and change your life for the better. One of those individuals for me was Neil Vanderkruk.

Last month Neil passed away at home surrounded by family. He was 84 years old.

Neil was special. He was unique. He was kind, considerate and empathetic. He cared deeply about his family, his church, his community, his profession and his trade organization. He was one of the founding members of Landscape Ontario. He spent his entire working life volunteering on various committees and boards of the association. He served as president of the association in 1988 and 1989. He received all the honours and awards the association bestows, including the prestigious Life Membership. Neil made immense contributions to Landscape Ontario from the founding of the organization until the present.

I first met Neil in 1988 when I was working at Humber College and volunteered for Landscape Ontario’s Promotion Committee. The committee held its meetings at Connon Nurseries (now NVK Nurseries). Neil had a special interest in attracting enthusiastic and bright young people to the profession. He had a passion for education, excellence and professionalism. He encouraged the promotion committee to organize a recruitment campaign targeting high schools and students with summer jobs in the horticulture profession.

In 1989, Neil made a phone call that changed my life forever. He offered me the job as Executive Director of Landscape Ontario. At first I said no, because I had an excellent job as Coordinator of the Landscape Technology Program at Humber College. He persisted, and finally I said yes. My Dean was also kind enough to give me a year off to try out the new job.

In September of 1989, I started working for Landscape Ontario. Neil was the president. That fall, I got to know Neil well as we travelled in his blue Cadillac visiting Chapters. What struck me about Neil was his uncompromising vision for what the profession should be reflecting. He hated the “fly-by-night” image of the landscape industry. He encouraged high standards and a professional image. He practiced what he preached. That year, we started an Apprenticeship program for the Golden Horseshoe area. He was so committed to education that he had a classroom built on his property to host the program.

Neil was also an excellent business person and excelled in financial competency. His skills benefited the Association as well as his own businesses. He taught me the importance of budgeting conservatively. Under his presidency, Landscape Ontario prospered. His approach was to never spend money you don’t already have. I still follow that guidance professionally and personally.

What impressed me the most about Neil was his generosity and his care. Even though he drove a Cadillac, had a pipe organ in his living room and owned one of Canada’s largest and most successful nurseries, Neil was humble, authentic and down to earth.

He was one of the most spiritual individuals I ever met. He was not one to wear his religion on his sleeve, but I could tell he was deeply influenced and guided by an inner voice and his faith was strong.

Neil was a great mentor. He had more faith in my ability than I had. He was always complimentary and encouraging.

One time he asked for my home phone number. He then called my wife Maxine to let her know how much he appreciated my work and that it was important she try and balance the time I spent away from home. To him, family life was more important. Another time, a cheque for $5,000 arrived from Neil. I asked him why. He simply wanted to support Landscape Ontario.

One of my career highlights was being asked by Neil to be the master of ceremonies at the 100th anniversary of Connon Nurseries. What an honour and what a class act. In typical fashion, Neil donated the proceeds of the bar to the Ontario Horticultural Trades Foundation’s Scholarship Fund. The entertainment included music by the Jim Cuddie Band and an awesome fireworks display.

Neil has left a legacy of benefit. His wisdom, vision, spirit and memory will live on in the thousands of people he has touched. He was truly a community builder. The profession and the world is a better place because of his many contributions.