A thought to kick-off 2013: Solving 80 per cent of your problems isn’t nearly as hard as you might think.

So what does this rule mean for our landscape businesses? Simply put, getting 80 per cent “better” doesn’t mean we have to fix 80 per cent of our problems; we merely have to identify and work on the 20 per cent of causes that result in 80 per cent of the effects (both good and bad).

Does 80 per cent of your work come from referrals of existing customers? How much more work could you land by investing more time and energy on getting referrals? How much more profitable would your jobs be if you spent your time in the evenings estimating and planning work generated by these referrals, instead of chasing down “tire-kickers” and handing out estimates in response to blind phone calls?

Repairs
In my company, it’s easy to see the Pareto principle in effect in our equipment repairs. Eighty per cent of our avoidable repair costs can be traced back to 20 per cent of our staff. Their bad habits and poor daily maintenance are helping my parts suppliers retire early!  What could you save on repairs by cracking down on your worst offenders? Don’t forget, every avoidable repair dollar saved is pure, net profit.

Wasted time
Mistakes, wasted time, rework, warranty, problems and stress can all be related to poor planning. When you don’t have a planning culture, there are only two types of crews in a landscape company: In our company meetings, many, many of our problems are blamed on “not enough time.”  The crews get to site quickly, eager to get to work and get a head start. And the foreman is no exception. He’s helping this guy set up his area correctly, correcting another one’s work, helping another lift some materials. Before he knows it, lunchtime’s arrived. He’s forgotten to order the materials that need to be there in the afternoon. He calls the vendor, who can get them there, but not until 4 p.m., so they kill some “make-work time” waiting for the materials. They work late to try to catch up.

Then they’re eager to get home. They rush home to eat dinner and relax. On the way to work the next day, the foreman realizes he needs a skid steer, but he forgot to ask for it ahead of time. The skid steer wasn’t returned to the yard.  Now someone’s off to pick it up and bring it over.
And that foreman, knowing he’s falling behind by two mistakes, puts his head down even harder to really put in a good effort. In his haste, he misses a layout mistake by his lead hand, and now they have to re-do a section. 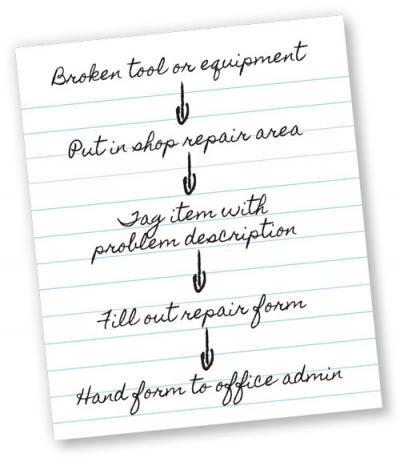 For example, how long would it take you to sketch out what happens when small tools or equipment need repair?

You could put together that plan in five minutes. Then you could spend another few hours putting together similar plans for the remaining 20 per cent of problems that are causing 80 per cent of the waste and inefficiency. Print or photocopy these and assemble a binder/book for each foreman.
Call a meeting, hand out the books and explain each system until it is clearly understood.

Then hold your staff accountable for these clear and concise instructions. You can easily train new foreman or lead hands on the same systems. There are no more good excuses. There are only three reasons mistakes are made:  It’s that simple
Twenty systems will solve far more than 80 problems. The three or four hours it takes you to draw up your systems will save you not just 12 or 16 hours over the season — I’ll bet it saves you hundreds of hours previously lost to waste, inefficiency and unnecessary costs. With solid systems in place, you’ll be well on your way to putting the 80/20 rule to work in your business.

Make 2013 the year you really get better. The easier way.


Mark Bradley is the president of TBG Landscape and Landscape Management Network — an online system of tools and systems that help turn great contractors into great businesses. www.landscapemanagementnetwork.com