From green to gold 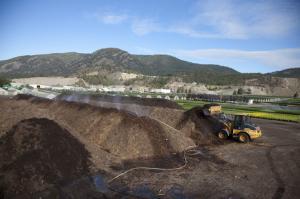 Managing a large compost operation on only three acres requires careful work, and some high piles.


Good news travels fast. When Landscape Trades heard through Vic Krahn of Lakeshore Tree Farms in Saskatoon about the green waste program run by Bylands Nursery in Kelowna, B.C., we had to follow up and find out more.

President John Byland said the primary reason for starting his own green waste composting facility was that Bylands does not have a convenient disposal site on its farms, and the local landfill was charging an exorbitant rate for disposal. His nursery, like most, generates a lot of organic waste, which can be heavy and costly to dispose of in an area where land is valued at nearly $100,000 per acre, according to Byland.

Starting an organic waste composting facility fit right in with company values. The nursery prides itself on environmental stewardship, collecting and recycling irrigation water,
recycling nursery poly and following an IPM program complete with the use of beneficial insects,

Initially, Byland explains, the nursery composted its own waste and applied the organic matter to fields after harvesting bare-root trees in the autumn. This not only enriched the soil, but allowed the nursery to plant another crop the following spring, and skip the step of letting the field lie fallow for a season. "It gave us great results," he says.

"Then we looked at our container program. We were spending between $50- and $100,000 on peat moss for our potting mix each year. We worked to process the product more finely and used it to successfully create a compost/bark mix for our containers. Because we're not having to truck in peat moss any more, we actually make money on our composting operation."

It requires a lot of green waste to create amendments for a nursery the size of Bylands, since 20,000 cu. yds. of raw material yields 12,000 cu. yds., or less, of finished compost. "We dedicate three acres to the site — which is really tight, and requires some management of high piles of compost," explains Byland.

The company has a contract with the regional district to accept its green waste, and even opened up its facility to local landscape contractors and arborists. For a fee that is less than half the price at the regional waste depot, contractors receive their own PIN code to Byland's gated facility and can drop off green waste at their convenience. "They can dump their green waste 24/7, and are responsible for sorting out rocks and garbage," says Byland.

When asked about success of the self-serve operation, he says that standards are enforced with tenacity. "Our foreman in the field drives by every hour or so to check the facility, and is insistent with anyone she finds dumping unacceptable waste. If someone continues to leave us garbage, we suspend his dumping privileges. We found suspension necessary only a few times, and people are now careful to follow our guidelines."

Vic Krahn said he was impressed with Bylands' investment in the facility, and its commitment to the local industry. "Not only is John creating his own product in a clean, controlled environment, but he is also providing a much-needed service and good will for the local green industry.
Share
Tweet
Mail