Bob Tubby’s presidency leaves an indelible legacy on his industry 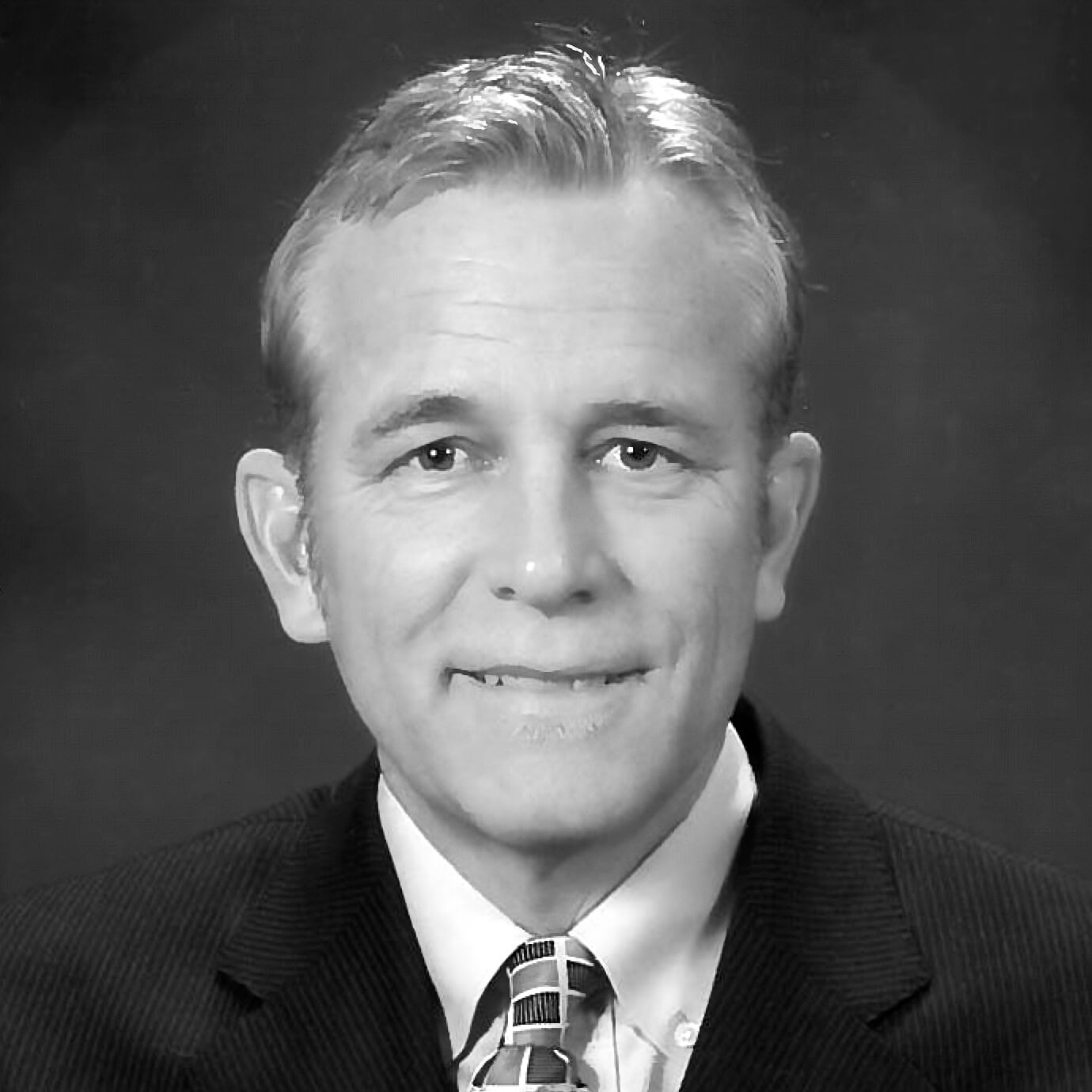 Bob Tubby
Bob Tubby’s presidency of Landscape Ontario in 2006 and 2007 is known for his work to introduce Prosperity Partners and landscape management certification.

Bob’s vision of LO was that of an organization that brought like-minded individuals together to prosper from one another financially, socially and professionally.

In 1982, Bob and his wife Mitzi Tubby started Arbordale Landscaping of Toronto and built a quality landscape firm based on a foundation of integrity, value and service. Through hard work and dedication to customers and staff alike, they quickly achieved their goal.

Bob Tubby’s educational background is the Humber College landscape program. He supplemented his landscape education by taking every business course he could find — from personnel and marketing to launching a small business.

Arbordale Landscaping provides design/build in addition to its core construction business. After a few years, Bob’s analysis told him that his maintenance jobs were not making much profit. He decided to find a more lucrative niche, founding a second company, Moonstruck Landscape Lighting. “Moonstruck was born because of profitability,” he says.

Bob participated in introducing landscape industry management certification to Canada; he was one of the high-profile industry members asked to review the program’s material, specifically the financial management module, before its launch.

One of Bob Tubby’s greatest achievements as president was founding Landscape Ontario’s Prosperity Partnership. The program helps entrepreneurs build a practical framework for profitability. “Guys who are in the business because they love landscaping tend to fail,” Bob is quoted as saying. “Profit motivation should be key. I love business, and I enjoy numbers.”

LO executive director Tony DiGiovanni wrote in his column, “When Bob Tubby served as LO president, he coined the phrase ‘Prosperity Partner.’ If we think of our work as being a prosperity partner to everyone we touch, we will create a culture where people will want to work for us.”

Jacki Hart, who has operated the program since its inaugural season, wrote in her Dec. 15, 2015 column in Landscape Ontario magazine, “When Bob became LO president, his presidential theme was to develop a tool to help members improve their prosperity. His initial task force met in 2006 at Canada Blooms, and many, many meetings later, a program was born. It was to become (and still is in 2020) LO’s template and language for business improvement.”

Jacki told members that since those early development days, more than 500 LO business owners and managers have engaged in dozens of workshops across the province (as well as in B.C., N.S. and N.B.) including the Introduction to Prosperity, Build Your Prosperity, Best Practices for Prosperity, Effective Management Short Course, and most recently, the Peer to Peer Network.

Thanks to Bob’s vision

Jacki concluded her column with, “Thanks to Bob Tubby’s vision for our members, I know the Prosperity Partners concept has helped hundreds of businesses improve. It provides an exceptional framework for thinking strategically about working ‘on’ your business and career, rather than ‘in’ it. It helps to gain a feeling of control, traction, purposeful decisions and attainable goals.”

In his 2006 Annual Report, Bob wrote, “Being an active member of this association is the best way to improve yourself as a professional. Association involvement also gives you a different perspective and helps you improve the way you run your business. I highly recommend it.”

He went on to write that during his last year as LO president, he made many observations about the association and how it works. “One thing that has impressed me is how Landscape Ontario is really in the business of people. What we have in LO is a vehicle for the people in this industry to unite around a common cause and work together for the benefit of all. When you combine a great staff with a dedicated and talented group of volunteers, you end up with the success story that is LO.”

In his final report in 2007, Bob wrote, “I speak the truth when I tell you that I don’t have one negative experience from my time as president. Perhaps I have been lucky to be in this role during very strong economic times, when the members and industry have been operating at capacity and (hopefully) making money.”

He went on to write about prosperity. “We are fortunate to have had very strong and wise leadership right from the beginning. The wisdom part comes into play as our forefathers (and mothers) agreed to create a strategic plan and set out on paper what they thought the association should look like five, ten and 20 years into the future. We are currently living that future and it’s amazing how close our current activity is to what was prescribed so many years ago. No accident!”

He praised LO executive director Tony DiGiovanni: “In case you are not aware, Tony is arguably the most important, well-known and respected person in Canada’s horticulture industry today. Behind every great man there is always a strong supporting cast. The staff members at LO are collectively a talented and dedicated bunch who deliver the goods every day. Working more closely with them has given me the opportunity to see how dedicated and talented they really are.”

When contacted in 2020, Bob said about his time as president, “Mentoring by Tony !!!! – for two years.” He also said that he learned about public speaking and professionalism. He noted, “There is no better way to learn the inside and out of the association than serving on the LO board of directors.” Bob also says that from his time as president he took away, “Contacts, contacts, contacts.”

When speaking on his theory of the Prosperity Partners program, Bob stated, “When I was preparing for my time as LO president, I knew that my free time was about to vanish, and my workload was about to double. I responded to these pending changes by reorganizing roles and delegating many of my day-to-day responsibilities to my team. This turned out to be a win/win situation. To my delight it was a positive impact on my employees. This strategy freed up my time to contribute to the business in more important ways.”

He went on to explain, “Another shift occurred in the way in which I viewed the work ahead of me. I combined my LO, work and life responsibilities as one big to-do list, not as three different lists which would require separate attention. In doing so, I found I was able to accomplish more by taking advantage of the synergies created by my expanded list. I would often group and address tasks of a similar nature, regardless of the list from which they came.”

Bob stated that his two-year term as president could well have become very stressful. “It didn’t. I decided to approach my new role with great energy and excitement. I was pumped about serving LO and the leadership mentoring I would receive. I had great expectations for my term and was not disappointed.”

On Jan. 12, 2016 at the Landscape Ontario Awards of Excellence ceremony, the ballroom at the International Plaza Hotel the packed venue shared in the ceremony when LO bestowed its highest award, an Honorary Life Membership to Bob Tubby.

The award is reserved only for those members who have consistently contributed their time, passion, enthusiasm and energy over a period of many years, and have committed a lifetime to furthering the mission of Landscape Ontario. Bob became only the 12th person at the time to receive the association's highest honour. 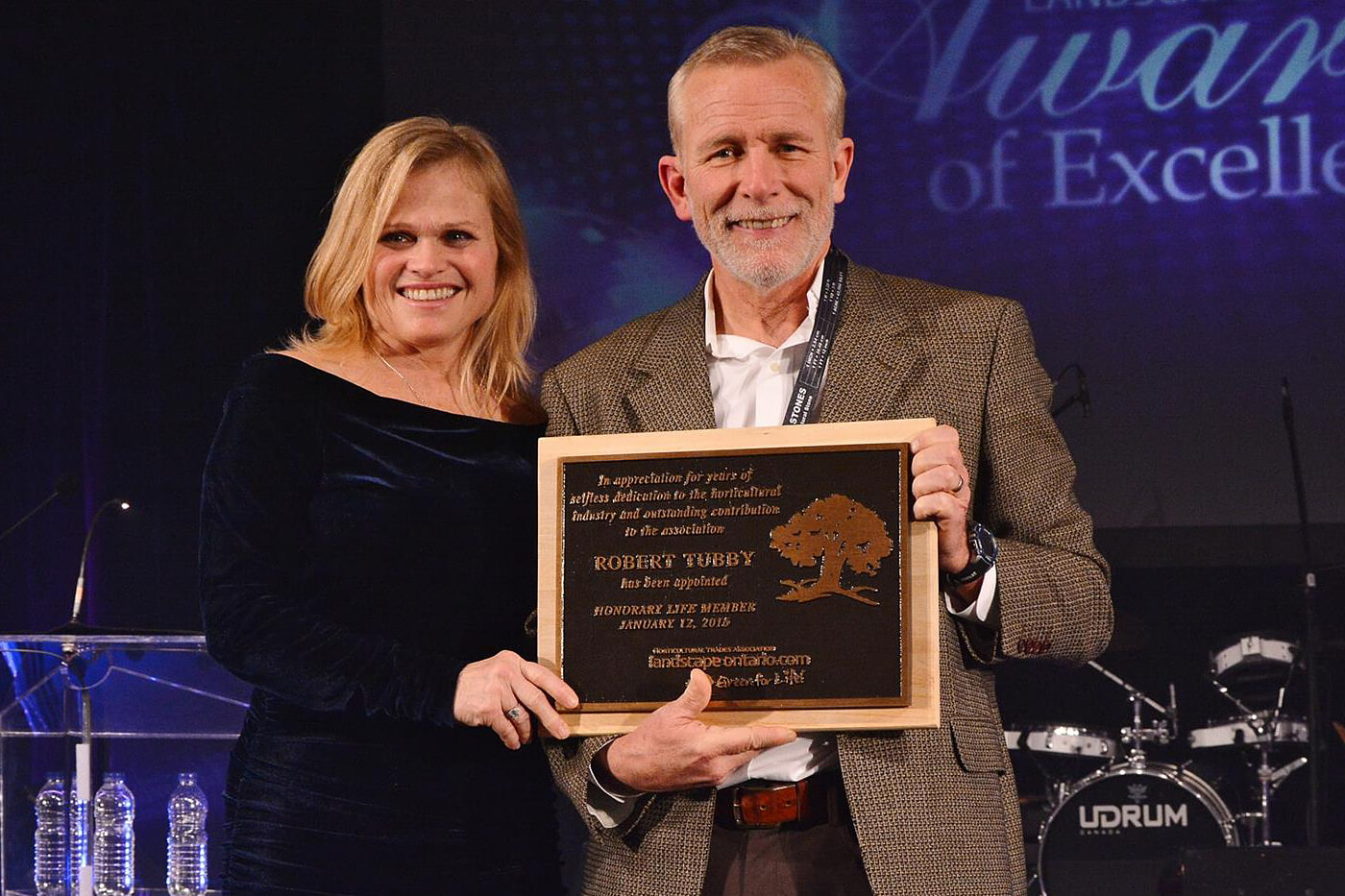 Bob Tubby is joined by his wife Mitzi on stage, while accepting his Honorary Life Member award on Jan. 12, 2016 at the LO Awards of Excellence ceremony.

Bob received some tough news in 2011, when he was diagnosed with Parkinson's disease. Bob said that he began experiencing symptoms associated with the disease in 2009. "I started noticing tremors in my one arm alongside feelings of anxiety. I knew something was off. It was all entirely new territory for me."

Parkinson's is a progressive nervous system disorder that affects movement of 100,000 Canadians. Although Parkinson's disease can't be cured, medications may significantly improve symptoms. Research efforts continue to find a cure.

In a June 2018 article by the University Health Network out of Toronto, it told the story of Bob’s grandson, then six-years old Findlay Chaplin, who set out to raise money for Parkinson's research.

The article stated, “Although Findlay was born after his grandfather's diagnosis, he has rallied around his beloved Papa." Instead of receiving birthday gifts, Findlay encouraged his friends to provide donations to the Morton and Gloria Shulman Movement Disorders Clinic and the Krembil Research Institute at Toronto Western Hospital. Findlay also ran a lemonade stand with all proceeds directed to Parkinson's research efforts at Krembil.

The article went on to reveal that Findlay played a significant role in his grandfather's life. “Together, the duo shares an incredibly special bond. They regularly go bird watching, take nature walks, swim in Robert's pool and spend memorable summers at the family cottage in Gravenhurst.

Findlay raised $250 with his project. The article went on to say, "We are incredibly proud of Findlay," says his mother Shannon Chaplin. "To a six-year-old boy, $250 may as well be $1-million. But when he donated, he was happy and felt it was an easy thing to do."

Findlay, like hundreds of other people who have come to know Bob Tubby, has an excellent role model. A role model who has left an impressive and indelible mark on his industry, association, friends, family and staff.

Members of 2006-2007 Landscape Ontario Board of Directors