The garden centre at Canadale Nurseries consistently wins awards in LO’s Awards of Excellence competition through the hard work of the people in this photo, from left, Lesley Livingston, Connie Silcox, Adele Ashford, Jim Stinson, Tom Intven and Pauline Intven-Casier. 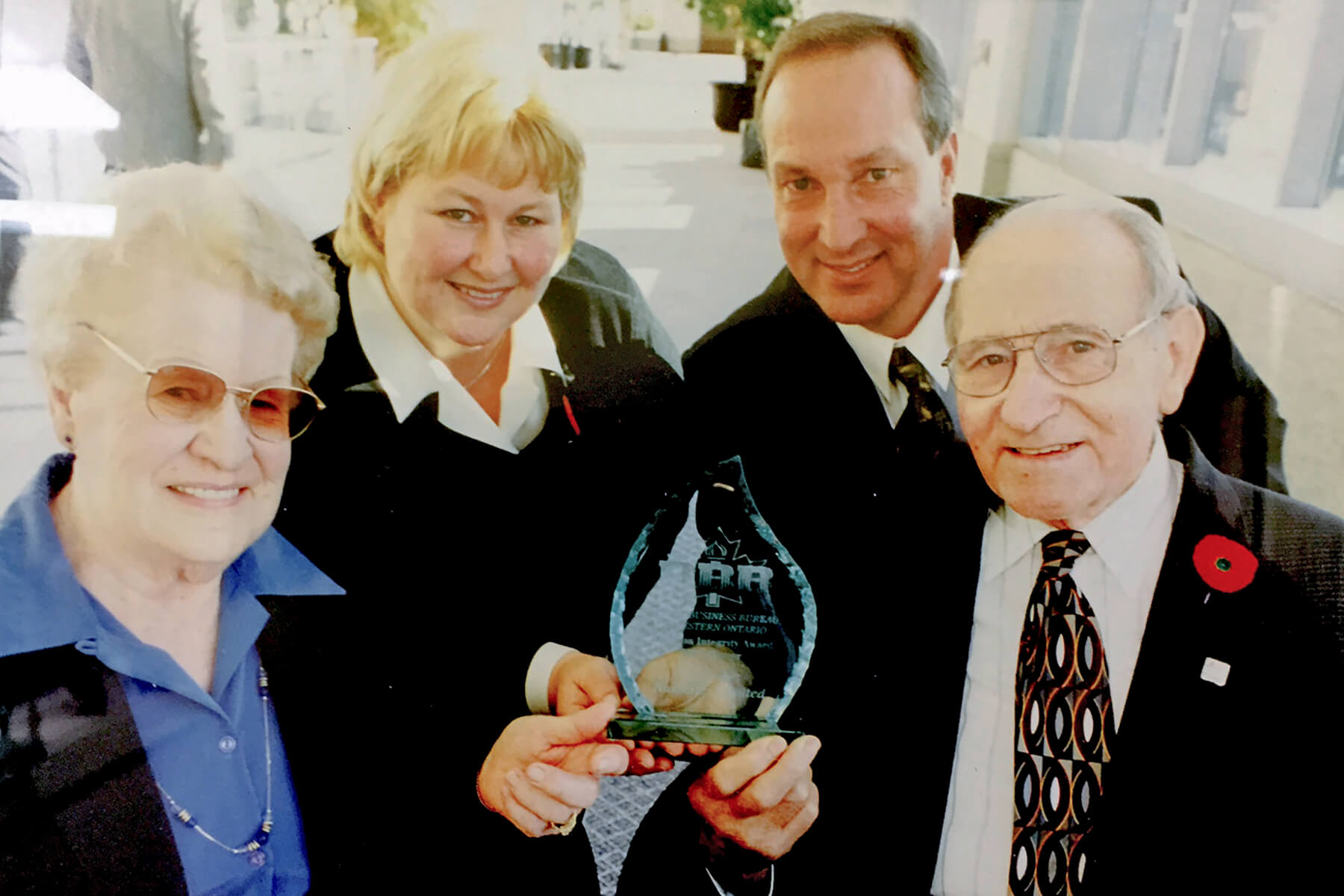 Canadale Nurseries in St. Thomas is celebrating 60 years in business.

From humble beginnings in 1955, the years have brought tremendous growth and recognition to the family-owned and -operated business.

Now into the third generation of family members, it all began with Bill and Joan Intven, who emigrated from Holland in 1950. Five years later, the couple opened Canadale Nurseries on a former tobacco farm.

The newly-arrived couple felt assimilating into Canada was very important, wanted a name to reflect their new country. The ‘dale’ was combined with the first few letters in Canada, as many streets surrounding the property of their new business ended with the word.

The family’s second generation, Tom Intven and Pauline Intven-Casier, now oversee the business, which features an award-winning garden centre and nursery. Following his graduation in 1977 with a degree in plant biology from Queen’s University, Tom moved into the family business. Pauline began managing the garden centre after graduating from University of Western Ontario in 1984.

Now the third generation is involved in the family business. Tom’s daughter Kate currently supervises the garden centre, while other children, nieces and nephews have worked in the garden centre over the past few years.

Over the years, Canadale has received numerous awards for its plants, garden centre and business operation. One that holds great pride for the family was the The Better Business Bureau of Western Ontario Business Integrity Award. It was a proud moment for the family as Tom and Pauline joined their parents to receive the award. Another major award was Landscape Ontario’s Consumers’ Choice Award as Ontario’s Best Garden Centre.


“I grew up in the business. When my parents began Canadale, I was three months old,” says Intven. Shortly after graduating from university, Tom Intven attended an International Plant Propagators’ Society (IPPS) meeting in Columbus, Ohio. “It really kindled a love of propagation in me,” says Intven.

The meeting also saw him become very interested in the IPPS, in which he later served as president for three years. “It really allowed me to network with growers from the U.S. and around the world,” says Intven. He added that the process was a great benefit in evolving his wholesale business.

In the early 1980s, Tom Intven became president of Landscape Ontario’s London Chapter. He eventually served on the provincial board of directors, and was named LO president for two years, 2011-2012. “I really enjoyed my time as president,” says Intven. He believes that the Association serves the important role of giving the industry a strong voice. “Our industry is better served by acting collaboratively rather than operating individually,” says Intven.

Rapid growth also took place at Canadale Nurseries in the 1980s. Intven says that at the time Canadale developed a plan to create year-round employment. “We also developed an RRSP program and incentives to create loyalty among a core employee group,” says Intven. “This group all had a passion for plants, and we all shared the same vision.”

Some of the people in the group continue to help Canadale maintain high standards. They include assistant manager Jim Stinson, who has been at Canadale for 30 years, and office manager Connie Silcox for 25 years. Others include assistant nursery manager, Robb Parmeter; manager, Rick Graham; Water manager, Shane Good; propagation manager, Jeff Haveron; and garden centre supervisors, Lesley Livingstone and Jess McDonald.

“Like any other organization, your business is only as good as your staff,” says Intven. “As an owner, you must ensure your staff has a passion for what they do.”

Intven says that every few years Canadale reviews its goals and plans. “That needs to take place to ensure the business stays up to date,” he says. “In today’s world, business is always changing.”

In the garden centre, recommendations by consultants have helped to evolve the business. A major change took place at the garden centre following a trip by Intven to South Africa in 2005. Upon returning home he built display gardens in the retail area, including three home fronts. Many customers, especially new gardeners, use the displays to get ideas to select their plants. Intven says it’s important to invest in the improvement of a garden centre in order for it to thrive.

He notes that most customers at garden centres are women between the ages of 30 and 50, and they want a place that is comfortable to shop, with a good layout and product mix. A number of years ago, hard surfaces were improved in the garden centre to provide easier shopping experiences.

Intven also invested in the nursery with the installation of a pulse watering system. He estimates that the new process saves the operation about 40 per cent in water use over the old system. Intven explains that the pulse system, along with saving water from running out of the pots, reducing leaching of the nutrients from the pot.

He says that the garden centre industry is in a transition phase presently with the baby boomers changing over to Gen Y shoppers. “This generation wants to be educated about plants, but they are also impulse buyers.”

On the nursery side of the business, Tom has seen the industry go from field-grown to container-grown plants. “There is also a demand for on-time delivery, and it is expected that all plant material is of the highest quality.”

The well-respected nurseryman says that there is a huge stock shortage in the U.S., and prices will rise, while the lower Canadian dollar has dropped over 30 cents below the U.S. dollar. Says Intven, “Of course every nurseryman faces the question of what will I plant, and what numbers will I need?”

He forecasts that growers will need to raise prices. “Plant material is still undervalued,” says Intven. He is confident in the future of the green industry which continues to change, but grow.