Kentucky coffeetree is a native of Ontario Mature height is about 20 metres.
By Sean Fox
University of Guelph Arboretum

While Kentucky coffeetree, Gymnocladus dioicus, can certainly be found in Kentucky and surrounding states, it is also a native species, although uncommon, in Ontario.

It is theorized that this species was likely moved into the province by aboriginal peoples, as natural, established populations are found predominantly along human migration and trade routes.

In natural settings, this member of the legume family is most often found in moist soils. In the urban landscape it has proven durable in conditions that are hot and dry with compacted soils. This attribute, in addition to a tolerance to road salt, alkaline soils and pest damage, has led to it being used with increasing frequency for urban cores and streetside plantings.

Gymnocladus, meaning “naked branch,” refers to the tendency for this species to leaf-out quite late in the spring and drop its leaves relatively early in the autumn.

Taking into account the entire dimensions of the very large, doubly-compound leaves, Kentucky coffeetree has the largest leaves of any tree native to Canada — up to a metre long. These leaves produce a very distinct, blue-green, fern-like texture that instantly stands apart from every other tree. Rich yellow colour in the autumn extends the ornamental characteristics into the subsequent season.

The second half of the botanical name, dioicus describes the dioecious character of Gymnocladus. Male and female flowers are on separate trees, and while small and inconspicuous, they are interesting upon close inspection. Female trees develop thick, leathery bean pods with brown, nickel-sized beans, lending to the common name coffeetree. Early settlers attempted to use the seeds as a substitute for coffee, however, the taste left something to be desired. The beverage is toxic when consumed in large quantities. 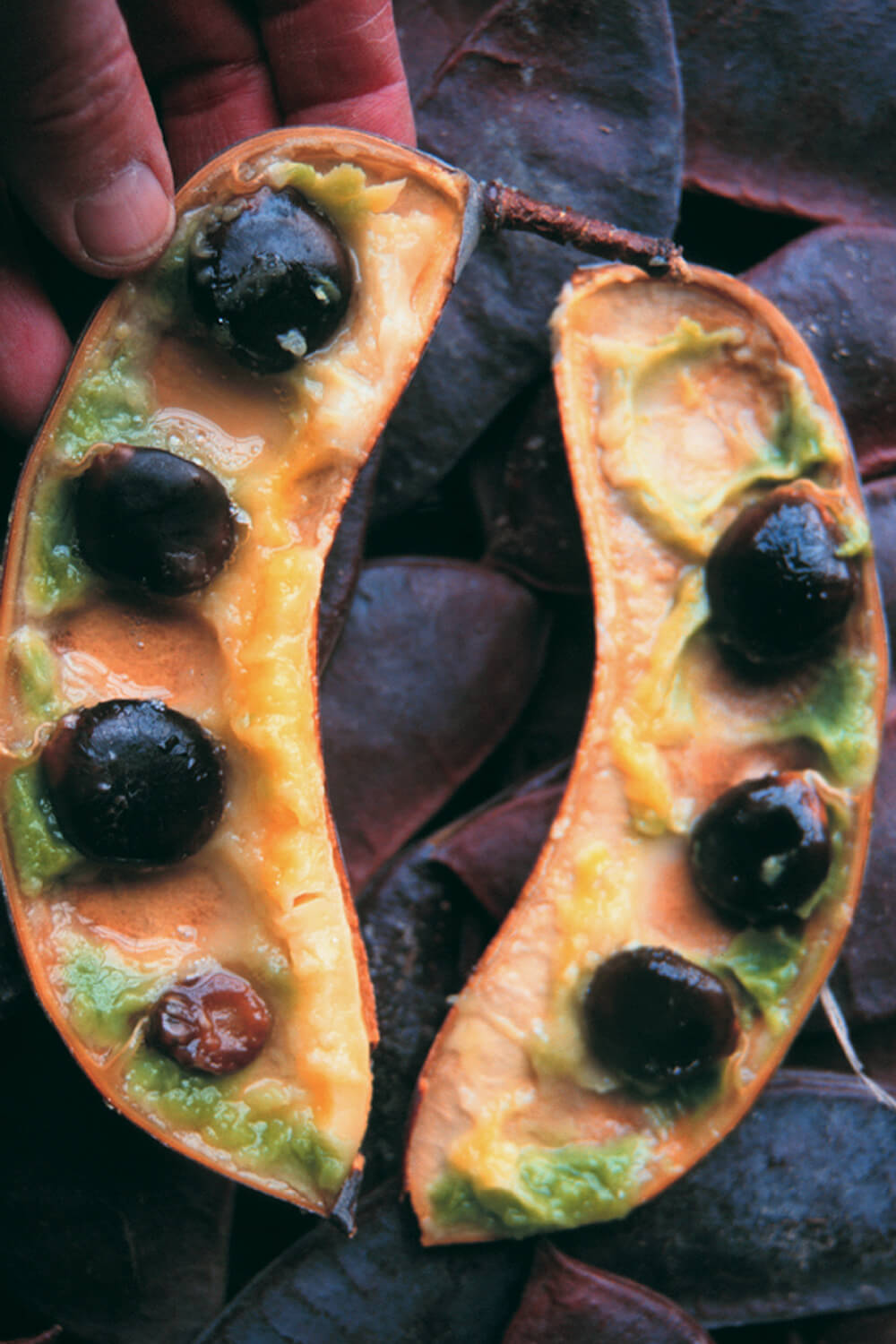 These coffee beans are toxic. 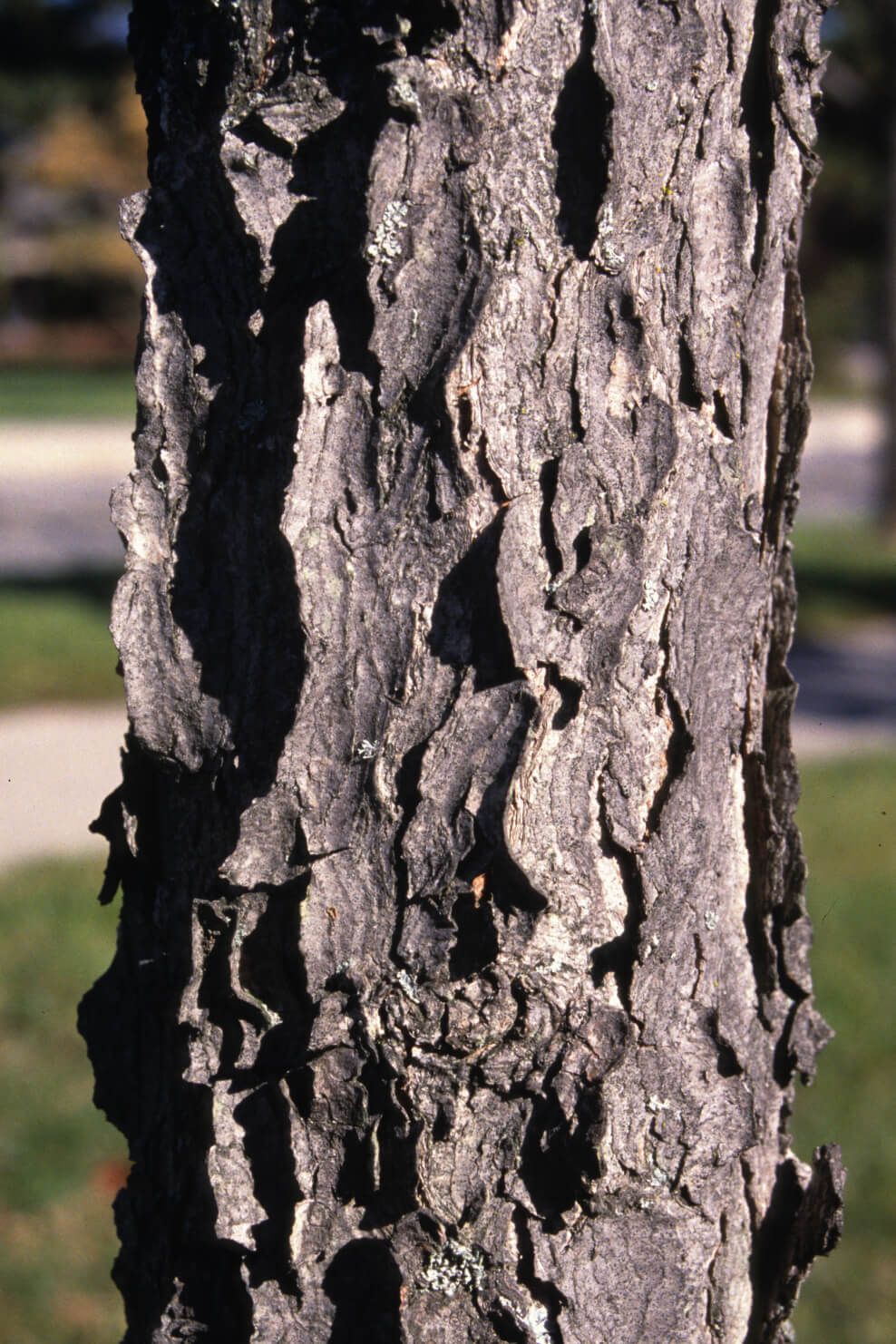 Textured bark.
Kentucky coffeetree is ultimately a medium-sized tree that may reach 20m tall and 12m wide in ideal cultural conditions. An expected size of 15m x 10m is more reasonable in most urban conditions. This species transplants very successfully. It has a medium growth rate and can look spindly for the first decade, however, once the canopy starts to fill out it is hard to beat this species for its unique architectural form and the comforting, dappled shade it produces.

The interesting, flaky bark provides interest year-round, regardless of age.  If the pods on female trees are considered a litter issue for certain applications, then male cultivars, such as Espresso, are available, though, it isn’t advisable to rely on this, or any other cultivar, too heavily for mass plantings.

Propagation is usually by seed. The hard seed coat requires scarification (typically with acid) prior to cold stratification. Root cuttings provide a means of clonal propagation.

Kentucky coffeetree should definitely be considered for any environment where a tough, problem-free tree is needed. This species, coupled with a large selection of other trees, will ensure that our urban forests contain a high level of biodiversity that will keep these canopies healthy well into the future.

This is the seventh in a series of articles highlighting 29 trees selected by the Landscape Ontario Growers’ Sector working group, as recommended alternatives to ash and Norway maple. For the complete list and factsheets on each, go to landscapeontario.com/trees-for-urban-landscapes.