The oaks (Quercus spp.) are a large genus with nearly 600 species known worldwide. Eleven of these species are native to Ontario, though many of are not commonly grown or planted.

Often evoking images of grandeur and endurance, oaks do have a reputation for being slow-growing and difficult to transplant. This varies among species and is sometimes unfairly applied to a few standout species that are worthy of being cultivated more often.

Where pin oak fails, an often neglected species that is more versatile in various soil conditions is Hill’s oak or northern pin oak (Quercus ellipsoidalis). It shares the deeply-cut, glossy leaves and intense fall colour of pin oak, and also adds greater drought tolerance, adaptability to both acidic and alkaline soils and increased cold hardiness. In fact, it is the most drought tolerant species in the black oak subgroup (those with pointed and bristle-tipped lobes). Hill’s oak is native to Ontario, found in a small area between Cambridge and Brantford, as well as in northwestern Ontario, near Kenora. 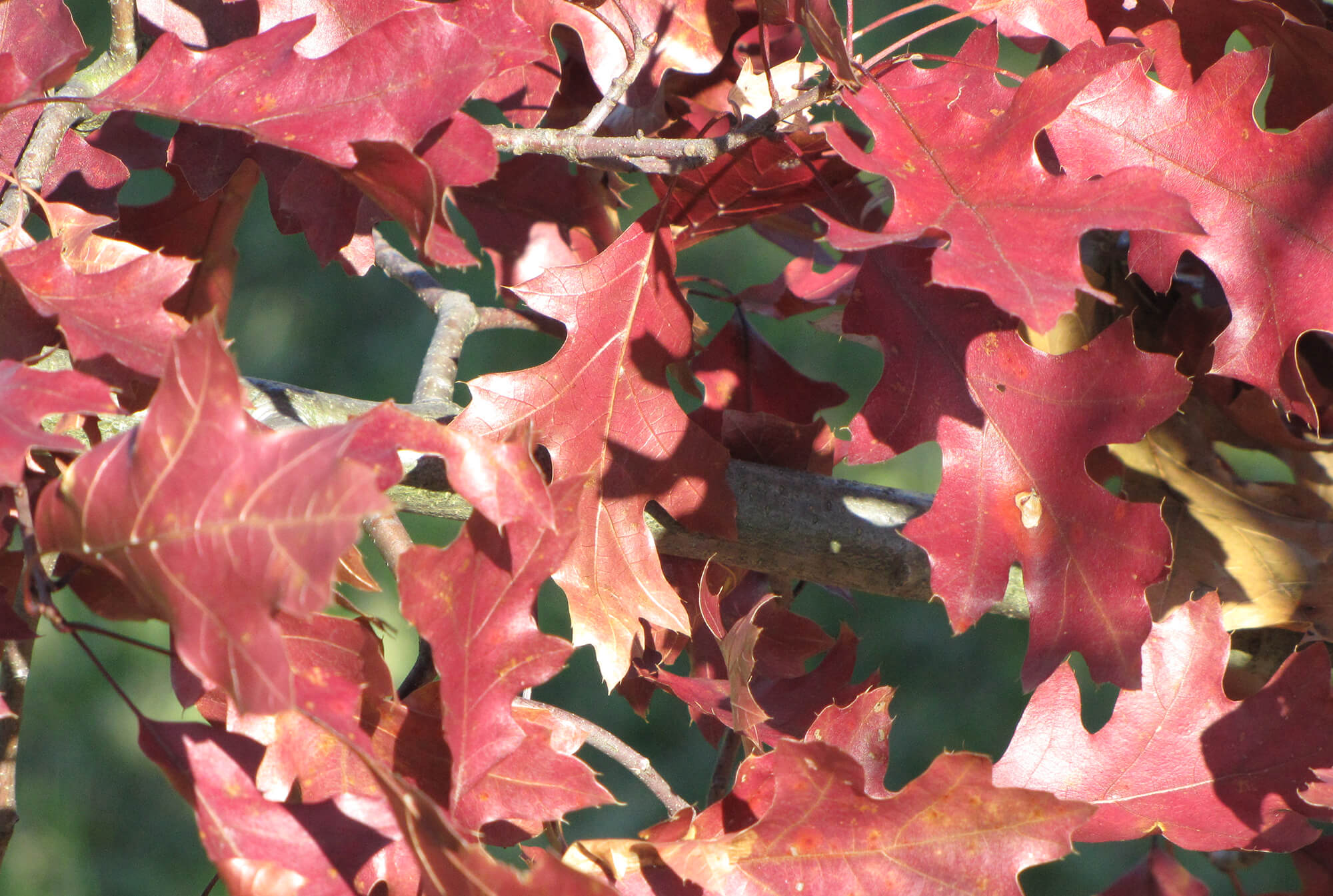 Hill’s oak. Shumard oak (Quercus shumardii) was added to Ontario’s list of native trees in 1978, when some variable red oaks  in Essex County were  identified as a separate species. The value of this tree for urban areas has been known for some time in the U.S., though only more recently considered for use in Canada. Shumard oak (sometimes called swamp red oak) is able to withstand periodic flooding. This ability to tolerate low oxygen levels in the soil has made it a good performer in heavily compacted soils. This species grows rapidly on favourable sites, yet is adaptable enough to survive in drought conditions. Shumard oak is very similar in appearance to red oak, though the sinuses between the leaf lobes tend to be more deeply cut and the acorns have larger, shallower caps. The glossy, green leaves often change to an outstanding scarlet-burgundy colour in the autumn.

Bur oak (Quercus macrocarpa) is one of the most urban tolerant trees that exist for cultivation in Ontario. Its appearance is often described as coarse, but for durability in dry, compacted, alkaline and clay soils, this species is tough to beat. Where the space exists to accommodate its wide-spreading crown, and when care is taken to allow for initial establishment after transplanting, the reward will be a specimen of grand beauty as it attains a great age.

Two species that will provide a similar effect to bur oak, without growing quite as large, are swamp white oak and chinquapin oak. These species can both be found growing in harsh habitats in the wilds of Ontario — a fact that explains strong performance in tough urban areas.

Swamp white oak (Quercus bicolor), as the common name suggests, is often found growing in low-lying areas that receive regular flooding. Like Shumard oak, this ability to tolerate low oxygen levels in the soil translates well to success in the compacted soils in urban areas. This species has few serious pests. The dark green leaf surfaces with its whitish undersides provide interesting contrast in the summer months. Fall colour is usually yellow, but some individuals show a touch of purple. 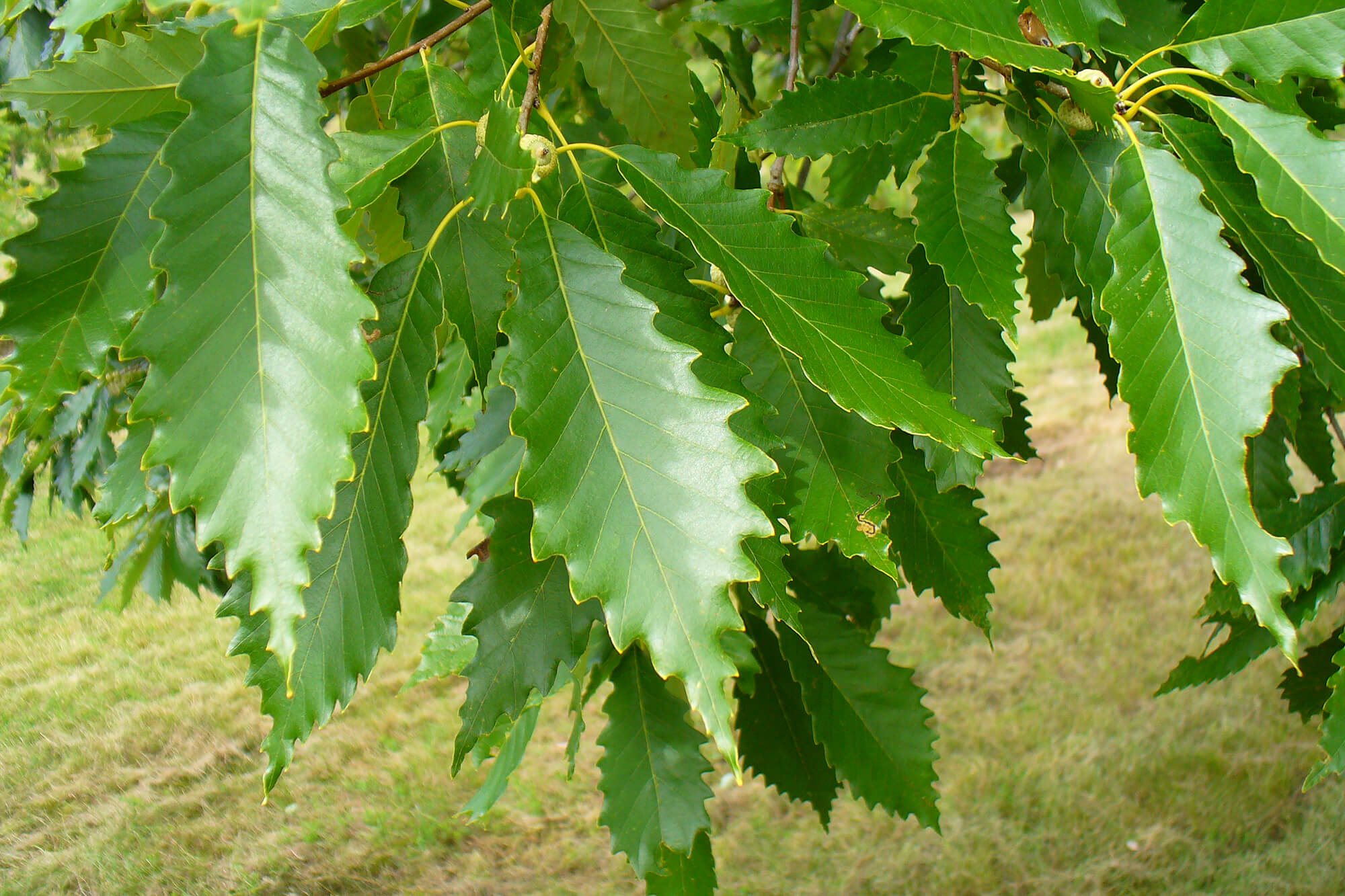 Chinquapin oak. Chinquapin oak (Quercus muehlenbergii) can be found growing naturally in Ontario along the shores of Lake Ontario, Lake Erie and the southern portion of Lake Huron. It is not uncommon to find these trees thriving on hot, dry limestone areas where few other species will grow. It transplants a little more successfully than bur oak or swamp white oak. On sites with favourable conditions, it grows quickly, despite a reputation for slow growth.  The chestnut-like leaves are glossy and dark green, the bark is rough and blue jays enjoy the small acorns. While a tough performer, this species, as well as bur oak and swamp white oak, lack the intense fall colour of red oak, Shumard oak and Hill’s oak.

In general, all oak species prefer sites with ample sunlight. The reputation as slow-growing stems from the fact that the growth rate is often slow on very poor sites. Keep in mind that these oaks have admirable longevity in conditions where few other species would even survive. When provided with good growing conditions, most oaks can be rapid growers.

The reputation of being difficult-to-transplant is valid, in that extra considerations should be taken to ensure successful establishment. Ball-and-burlapped or container grown trees tend to perform better than bare root. They transplant even more successfully when production techniques are employed to encourage a more densely-fibrous root system in the root ball area. 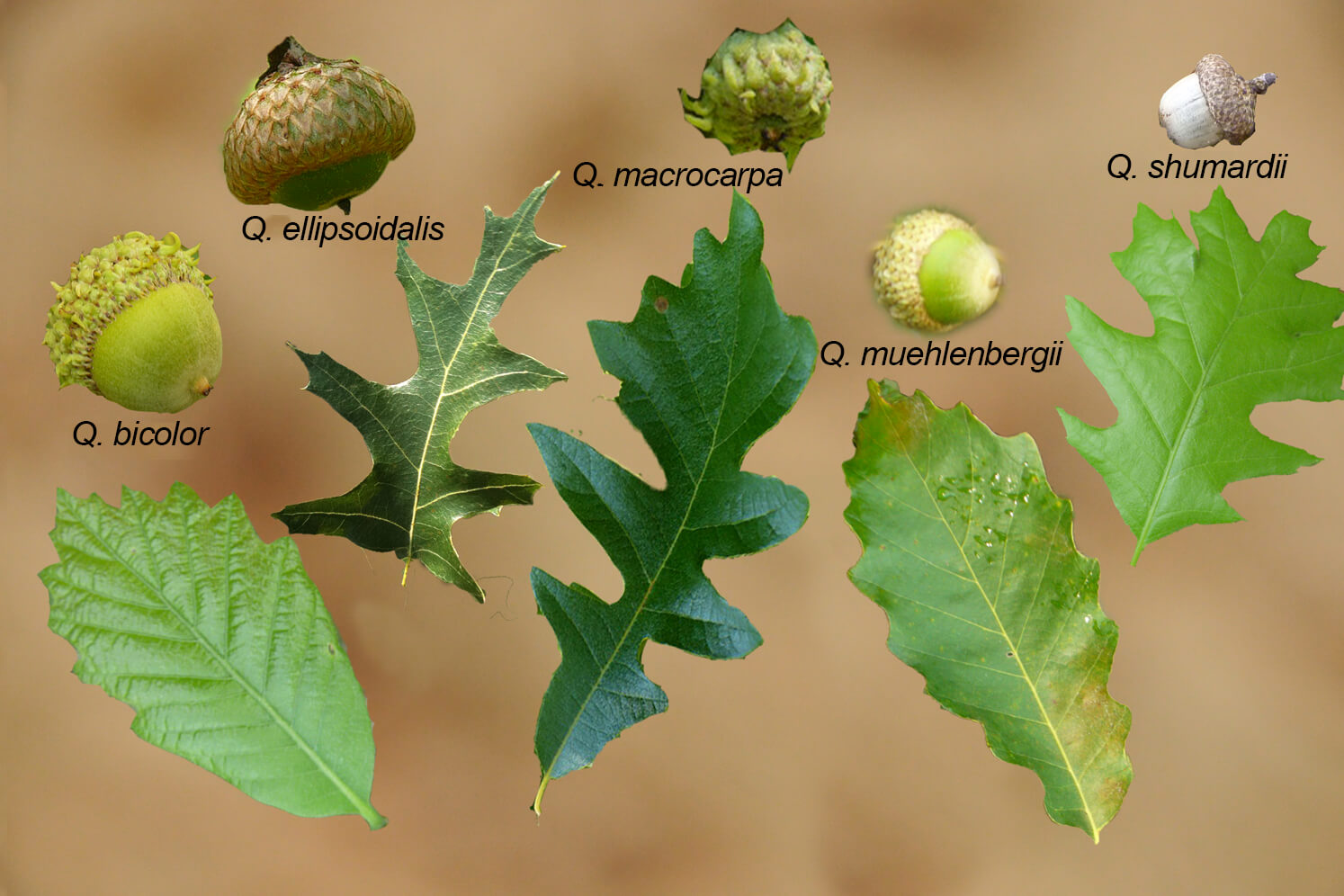 Oaks produce varied leaves and acorns. The species described thus far are considered the most versatile for a range of applications in Ontario. For very site-specific conditions such as sandy, acidic soils, species such as black oak (Quercus velutina), scarlet oak (Quercus coccinea) and chestnut oak (Quercus prinus) may have some value. Shingle oak (Quercus imbricaria) is another durable species with toothless, glossy leaves that is native just south of the border. Two shrubby species of oak are native to Ontario, bear oak (Quercus ilicifolia) and dwarf chinquapin oak (Quercus prinoides).

Planting oaks in our urban areas will provide a large return on investment when the correct steps are taken to ensure proper establishment. The opportunity to select from so many durable species only helps to ensure that the diversity needed to keep our urban forests healthy is more easily attained.

This is the eighth in a series of articles highlighting 29 trees selected by the Landscape Ontario Growers’ Sector working group, as recommended alternatives to ash and Norway maple. For the complete list and factsheets on each, go to landscapeontario.com/trees-for-urban-landscapes.