Just before his death at the age of 81, on Aug. 15, 2006, Cullen was interviewed by Landscape Ontario’s Horticulture Review (now Landscape Ontario magazine) editorial director Sarah Willis and Denis Flanagan, the association’s director of public relations, who worked for Len Cullen from 1979 until the stores were sold to Sheridan Nurseries in May 2003.

“It was a tough and emotionally charged assignment to interview Len Cullen during the last few weeks of his life,” said Flanagan. 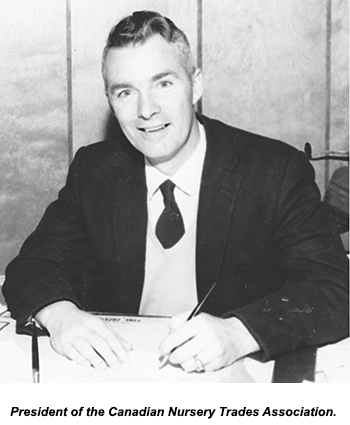 Len Cullen’s introduction to the industry began in the early 1940s, when as a young teenager in Toronto, he cut the lawn and shoveled snow for John Weall. By age 17, Cullen was working full time for a little landscape business owned by Weall on Toronto’s Avenue Road. At 22, Len Cullen bought the business for just under $3,000.

John Weall was a professor of horticulture at the Ontario Agricultural College in Guelph.

A short time later, Cullen sold the property for a modest profit and bought five acres on Sheppard Avenue, near Leslie Street in North York. Once established, landscape construction was the main work for the company under the name John A. Weall Co. The business changed to Weall & Cullen in 1951. Around 1955, the nursery/garden centre portion of the business began to thrive.

In his 2006 interview with Horticulture Review, Cullen explained that in the 1950s, garden centres weren’t as widespread as they are today. “Salesmen would knock on doors all winter selling plants, and make deliveries of bare root plants in the spring.” As a result, he said, there was quick and easy growth in the garden centre industry. “We could just plop the plants down so people could see them and pick out the plants they wanted.”

Cullen also explained that no one used carts in those days. After observing Ted Reeves in Woodbridge bring in carts to his garden centre, “You can bet I had carts the following year.”

Cullen remembered accepting deliveries back in the early days was also different. “We’d get a call from the local railroad station telling us we had two days to empty the rail cars,” said Cullen. “We’d needed to pull our landscape crews in to help.”

In those days, Cullen said all plants were either bare root or B&B, so the garden centre season wound down quickly and usually ended June 1.

Cullen remembered a summer nursery tour in the London area, where he saw that Ted Shuttleworth had all his perennials in pots. “I’d never seen anything as nice,” he said. So Cullen and his brother began growing nursery stock in one gallon metal cans. “It was a great success, but we had problems overwintering them. It took us a while to come up with a system to protect the plants.”

In his interview with Horticulture Review, Cullen proudly remembered, “Our Sheppard Avenue store was probably the busiest garden centre in Ontario through the 1970s.”

He talked about a major turning point for him when he visited a community where boutiques were housed in a large barn. Cullen said he thought that he could do that at his location. Learning that several barns were being torn down to make way for the proposed Pickering Airport, Cullen arranged to have them moved to a 17-acre property on Steeles Ave., where he created the Cullen Country Barns. The maze of boutiques and eclectic selection of products drew shoppers and bus tours for many miles.

Cullen received a prestigious award, which was handed out to Canada’s top businesses in 1987, the Canadian Business Achievement Award from the Canadian Government for Cullen Country Barns. “For a while,” Cullen said, “we could do no wrong.” However, the Barns didn’t recover from a drop in sales after a fire in 1988, and closed soon after.

Len Cullen is quoted as saying, "I've always really enjoyed my work. I look forward to it every day. Monday is just as nice for me as Friday. The side of the business that I get the most fun out of is supervising or working in the gardens, pruning trees and shrubs, planting flowers and bulbs, building rockeries. Unfortunately, I don't get as much of that work as I would like because I have to shuffle paper, and I hate it. I have never been used to paperwork, always been an outdoorsman. When it comes to writing, doing payroll or schedules, filling in forms, I shuffle as much of that off on other people as I can."

Flanagan remembers in his interview with Len Cullen, “He shared many stories and thoughts, but two comments that resonated with me when I asked what had made him so successful. He answered, ‘I believe I kept a balance in life between work, family, fun and faith. I also hired the right people.’ ”

In his column, which appears in Toronto Star, Len Cullen’s son Mark, wrote, “One day when we were strolling along a path, my father, walking with his favourite ‘D’ handled spade, and me just trying to keep up the pace of both the conversation and the walk. On most occasions our conversations revolved almost exclusively around our gardening business. And so it came as a great surprise to me on this particular day when he stopped abruptly during our stroll, mid-stride. He bent down, took a stance that I had seen thousands of times before, and he began to dig – right in the middle of the dirt path, one spadeful, two and three. Then he moved the dirt back into the new hole with the spade. He slowly straightened his back, hand on the base of his spine for support. Slightly out of breath, he said, ‘I love to dig.’ Then he paused, “I love to dig.” Then he looked me square in the eye and exclaimed, in case I hadn’t heard him, ‘I love to dig, Mark!’ ”

Art Drysdale, a Canadian horticulturist and radio personality, described Len Cullen as “an entrepreneur par excellence, a man of his word, a dreamer, a doer and a friend.” 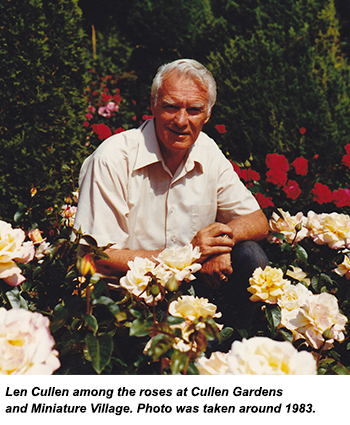 Flanagan remembers driving into work one early morning to the Weall and Cullen store in North York. “The parking lot was empty, except for a man wearing an old coat and a cloth cap. He was picking up pieces of garbage. I found out later that day that it was Len Cullen, owner and president of five successful garden centres. Len was notorious about insisting that his stores were kept spotless. He would often drop by a store, and without really talking with anyone, he would just casually walk around. On several occasions, I would hear from staff that they would find the initials LC etched on a dusty shelf. Now that was a powerful performance review,” says Flanagan.

Prompted by his involvement in the construction of Edwards Gardens in the 1950s, Cullen had harboured a dream to have his own display gardens. His dream was realized when the Cullen Gardens and Miniature Village finally opened in 1980, featuring some spectacular plantings and 160 miniature buildings on 25 acres in Whitby.

On January 1, 2006, Cullen Gardens and Miniature Village closed. The land was purchased by the Town of Whitby, to remain in the public domain as a municipal park. The miniature Village no longer exists at the site and the model buildings were sold to the nearby City of Oshawa, which later put them up for sale. The miniature buildings were purchased by the Niagara Parks Commission in 2012. Many of the miniature buildings are now on display at the NPC's Botanical Gardens in Niagara Falls.

Asked how he maintained balance throughout his busy life, Cullen replied, “I chose good people to work with and I never worked on Sundays — always spent the day with my family.”

While most people know him for the Weall and Cullen garden centres, the Barns, or the Cullen Gardens and Miniature Village, during his life Len Cullen also spearheaded the creation of a Baptist education centre and a seniors’ retirement community. In 1987, Len and his wife Connie Cullen bicycled 800 miles from Windsor to Ottawa to raise money for the Baptist Convention of Ontario and Quebec.

Len Cullen is quoted in a profile by Dick Drew for a series entitled, Canadian Achievers, "Connie and I decided we would ride our bikes to raise money for the Baptist education centre. I sent letters to all our friends and all our suppliers, saying that we were going on this ride and asking them to either pledge so much a mile or make a donation. They wouldn’t have to pay if we didn't make it!

"We had a tremendous response. Many sent donations and made pledges. We took along a van, which one of us would drive while the other pedalled the bike. I used to like to get up at 5 a.m. and head out while there was little traffic.

"After we got into the rhythm of it and in better shape, we could go further distances every day. It took us 18 days to do the 800 miles and it was fun all the way.

"We also raised $250,000 for the Divinity School-and we're pretty pleased about that." 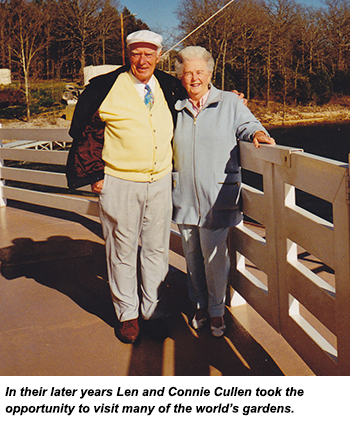 While his attention was focused on building a business, Cullen was a visionary when it came to the industry he loved. In the early 1950s, he joined the Canadian Association of Nurserymen, because, “The members I met all knew so much about nursery work. I volunteered to do the decorating at the convention when it was in Toronto – and I made sure I did a good job.” As a result, Cullen said he was able to associate with some ‘highly experienced men.’ Mentioning other Canadian horticultural pioneers such as Henry Eddie, Bob Neilsen and Leslie Hancock, Cullen stated in the Horticulture Review interview, “The help they gave to me, my brother, Ken, and Len Chambers (original partners in Weall and Cullen) was wonderful.”

He continued, “I collected some great ideas from these men. I was a great copycat,” he smiled. “Not many ideas in life are original, you can learn a lot from others.” Cullen remembered his early days in the C.A.N. fondly. “We held conventions across the country and it was a highlight for many of us. People brought their families and we made some good friends right across Canada.”

Cullen also loved the written word and often wrote poems to commemorate a special occasion. He also wrote two books about his experiences, the first, Dig About It and Dung It chronicled his beginnings in the nursery industry. The second Some Fell on Good Ground, covered the latter part of his career and his adventures once he retired.

He also created a very successful company newsletter that was sent to 35,000 customers. For nearly 20 years, the newsletter contained gardening hints, Len Cullen’s poetry and other items of interest.

Len Cullen passed away in 2006 after a brave fight against pancreatic cancer. Cullen was survived by his wife, Connie, who passed away on Dec. 9, 2015. Their children include Susan, Peter, Mark, Nora and Tom.

Today, his son Mark carries on his father’s legacy in the industry. In 2016, he is Canada's best known gardener, appearing on television, radio and a column that appears in the Toronto Star.
Share
Tweet
Mail