Verbinnen’s Nursery grows about 120 varieties of native trees and shrubs on 26 acres near Dundas.

Share
Tweet
Mail
One doesn’t need to talk with John Verbinnen long, to realize he is a man of passion.

From his career as owner of Verbinnen’s Nursery near Dundas, to photography, to family and his church, John Verbinnen exudes enthusiasm.

In 1978, John Verbinnen brought his background in horticulture when he began work for Groen’s Nursery. “At that time we worked with liners and root stock,” says Verbinnen. “I began dabbling with plugs around the early 1990s.”

In 2000, John and and his wife Cindy acquired the nursery from her father, Henry Groen, who retired. The couple changed the name to Verbinnen’s Nursery shortly after.

“When I took over the business, it was a huge learning curve for me,” says Verbinnen. “I really had no business experience, so at the start it was very nerve wracking.” He remembers how people at Connon Nurseries and Sheridan Nurseries helped him along the way. “They were so good at giving me great advice and sharing their knowledge.”

It wasn’t long after Verbinnen took over the nursery that he saw the demand for native species of trees and shrubs increase. “It took a few years to adjust our focus to natives, but from that time on the demand for native species exploded. We still grow some rootstock, but it’s only on demand,” says Verbinnen.
Now the nursery grows about 95 per cent of its crop from local seed sources. “We even have customers request trees from very specific seed zones,” says Verbinnen. 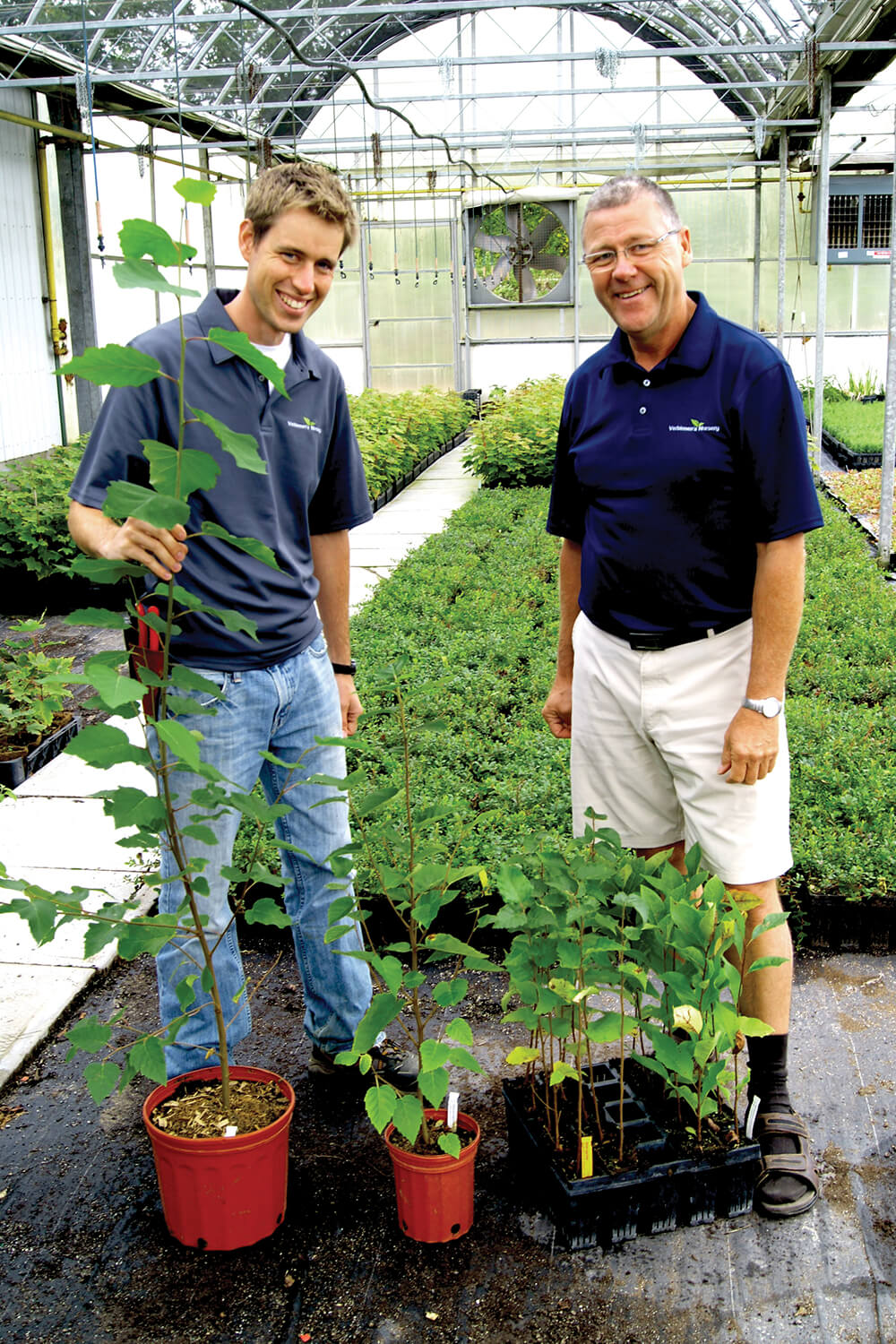 Alex and John Verbinnen show off how size does make a difference. These birch were all planted in April of this year. On the right, the plants were left in trays, while the centre plant was transplanted to a one-gallon pot in June, and the one well over five ft. tall, was transplanted into a three gallon container on July 31. Photo was taken on Sept. 16.

Over 120 trees and shrubs

The company grows about 120 different native trees and shrubs. Some are shipped after only a couple of months, and others not out the door until after seven years. Most the product is from one to two years old.

John Verbinnen’s passion comes to the forefront when he begins to talk about working with native seeds. “I get excited about breaking the seed’s dormancy and then working the seed into a saleable plant.” He explains that there has been a lot of experimenting with the plants at Verbinnen’s. “I don’t like to force plants through nutrition; instead we use cultural practices to control growth, for example working with plug sizes and transplanting dates.”

He believes that when starting off with a good root structure, trees will continue to thrive as pot size increases. However, Vebinnen notes,“Just because they are native plants, doesn’t mean they are easy to grow.”

Customers include landscaping contractors, conservation authorities, municipalities and other nurseries. The nursery sits on 26 acres, with about 12 acres in production. There are 10 full-time employees with 16 seasonal staff.

John Verbinnen says he is proud of his team management system at the nursery. “It’s not a top-down management style here. We believe in a team that has each member contributing his ideas and passion. What a wonderful blessing it is to have the staff we have.”

Verbinnen has been joined in the business by his two sons, Mark and Alex. Both sons have taken key roles in the business. Mark is a recent horticulture graduate of Niagara College. He is in charge of managing the inventory. Alex is very involved in the seed handling, as well as testing new production methods. With some help from retired University of Guelph professor Glen Lumis, Alex is working on techniques to improve root structures in container grown plants.

Some of the most popular species with clients right now are staghorn sumac and bush honeysuckle.

A project that is important to John Verbinnen is the city of Sudbury’s work to re-green its landscape. The area around the city has been compared to the moon’s surface, because of its mining legacy. Verbinnen’s is growing plants for the city. “I am very proud and excited to be part of this program,” says Verbinnen.
“We can re-build what man has destroyed, and that’s something to be proud of.” Verbinnen’s has been helping the program for the past seven years.

Berries from mountain holly, winterberry, wild raisin, bristly sarsaparilla and seeds from ironwood, green alder and mountain maple were collected and sent to the Ontario Tree Seed Plant for processing. These seeds were later sent to Verbinnen’s Nursery to grow the plants for the 2012 and 2013 season.

John Verbinnen refers to his interest in photography as his second passion. “My two big interests make a beautiful marriage, allowing me to capture our plants in photographs and all the changes that the different seasons bring.”

Verbinnen created a unique view of germinating eastern redbud seedlings seemingly dancing in a video taken over one month with stop motion photography. The unique look at the plant’s growth can be seen on www.horttrades.com/verbinnens-time-lapse.

The simple video gives some insight into John Verbinnen’s passion for an industry he loves, and for which he thanks the Lord.
Share
Tweet
Mail