Nothing stays the same

The adage is: The only constant is change itself.

We were in Vancouver, one of our favourite cities, at the end of September. The weather was warm, the air smelled fine and life was indeed wonderful. We were walking down Denman Street, not too far from our West End apartment. For people not familiar with The West End, it is densely populated, very densely populated. High rises dominate the skyline, filled with people, lots of people.

We had not been in Vancouver or along Denman Street for eight years due to dialysis issues. Nonetheless, there we were and it was great to be back. We were checking for our favourite businesses to see if they were still there. Chris, who owned the bagel shop, had moved to Victoria for love and now his spot is an Irish pub. The dry cleaner was still there but there were half a block of store fronts missing, as they constructed another twenty-three storey condo on that same spot. Our favourite pizza spot was vacant as were the shops we went for great soup and a local diner. There were Starbucks everywhere and they had taken over the local coffee shop that had been, at least in my mind, a bastion against franchise giants. Landlords had raised the rents until the only ones who would pay that much money were the big boys with deep, corporate pockets.

We found that our favourite Middle Eastern deli was still there. We were excited. It looked the same but it had a new owner and the hummus had changed. It was not as thick or tasting of garlic and lemon as the previous owner had made it.

Life does not stand still, for anyone, even if you want it to, and the only constant is change itself.

What I described from Denman Street has occurred in your neighborhood as well. In Regina, there have been many changes. Buildings have gone up and come down, businesses have moved or downsized: All of the same things that have happened on Denman Street. The only difference is that they happened one at a time for me because I live here. Had I been away for eight years, the changes would have been much more noticeable as they were for the fellow I write about below.

I was at a weekly meeting for a community group. A fellow, who I recognized from the neighbourhood, was in attendance. He sat beside me. He was a man in his seventies and had not attended for more than ten years. The first thing out of his mouth was, “Where’s ‘Old Ann?’” I didn’t know who he was talking about but another old timer said, “Ann died from cancer, eight years ago.” The fellow beside me grunted. Again, he asked in a loud voice, “Where’s Gordy?” I knew Gordy and I told the fellow that Gordy had died last year, in Arizona, from a heart attack. He grunted at that information. Then, to everyone’s utter amazement, he took out his cigarettes and lit one up. We were in shock. One of the members said, “You can’t smoke here!”

“Why the hell not?” he asked, seething with anger.
“There is a law against smoking in public places.”

“We used to smoke here all the time,” says the disgruntled gentleman. “What has happened?” he asked, but I am pretty sure it was rhetorical.  He did put his cigarettes away but he was confused. He had left for ten years and he genuinely thought that nothing would have changed in his absence.

I get that, sort of. I don’t like change. Only wet babies like change. But if you are going to live in today’s society, change happens and it happens faster and faster. If you don’t believe me, try borrowing someone’s phone. Good luck with dialing that number.

At London Drugs, I bought an alarm clock. The eighteen-year-old clerk snorted at my choice, it was so basic. I had to explain that I didn’t need a docking station or anything programmable. All I needed was a clock to wake me up in the morning so I wouldn’t be late for work. I muttered to the young woman, “This clock, I can understand.” I am pretty sure her look was a mixture of patronization and derision. By the way, the clock works just fine and I knew how to set it the first night. 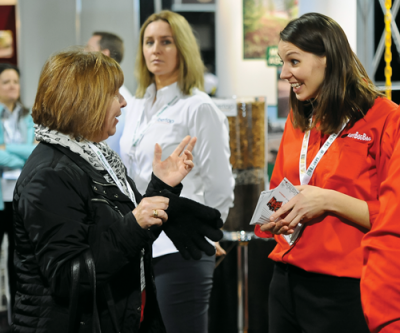 Trade shows and conferences allow you to build relationships with suppliers that will last you a lifetime and will make you money.
A long story as to why I was in Vancouver. There is an easy and simple explanation. I was there for the Can West Hort Show. I hadn’t been at that conference for ten years and of all the conferences I used to attend, this one was my favourite. I love conferences, shows, seminars, all of that stuff. They are a wonderful way to connect to the people of this trade and to the products. I am always reminded, when I attend, of what I have said many, many times. This trade of ours contains the finest people in the world. I have never regretted spending my life in this trade and I would not hesitate to do it again, but God has other plans for me.

Being away from the show floor for ten years gave me the opportunity to see how things have changed, just not at the show, but within the trade. The first thing that caught my eye was that the show was smaller. With online web sites, there are not as many companies willing to invest the time and money in a booth. I get that. A grower can send me a photo of a #10 potted ‘Walker Weeping’ caragana, tell me the price and how many he has, in an instant via my email account. That is why it was nicknamed ‘The Information Highway.’

The second phenomenon I noticed was the absence of my friends and cronies. Their companies had booths but they were staffed by the next generation. I reluctantly approached some of the booths, offering a hesitant, “I am friends with your dad, but you probably hear that all of the time.” I had to be careful not to sound too much like an old geezer, accepting and realizing that another generation is taking over. It is their turn. They have been in the trade, many of them, for their entire lives and they know what they are doing. My role is to let them do their job and not to ask in a loud voice, “Where’s old Ann?”

The third thing that I noticed was that my friends that were in attendance, not withstanding my white moustache, are getting older. We get two choices in the aging process: The first is getting older and the second is dying. Considering those two options, I will live with the white moustache.

I was sitting in a seminar and seated to my left was a young man, who was well spoken. I looked at his badge and said, “I visited your father at your nursery around 1979.” The young man stared at me, thinking that he wasn’t even born in 1979. Thank goodness he was too polite to say those words and I have learned to choose my remarks with more care.

When I started out in this trade in the seventies, you had to attend conferences and shows to find out what the new plants and products looked like. No grower was about to load up his truck and drive around showing everyone his new introductions. Additionally, printing was both expensive and time consuming. Not at all what it is today. So the booths at conferences showed off new plugs, poinsettias, caraganas, hanging baskets, pottery and anything else that you wanted or needed to see if you wanted to stay in the loop. That was a booth’s main purpose.

Today, the question can be reasonably asked: Have trade shows and conferences outlived their purpose, what with instant photos and the new media? I was there and I can answer in a simple word and that word is no. Conferences and shows allow you to find new suppliers that you might overlook on the internet. Conferences allow you to build relationships with suppliers, face to face, and those relationships will not only last you a life time, but they will make you money.

At this show, I spent time with old friends including Rob Van Zan-ten from Pan American, Han deJong from Paridon, Theo and Sylvia Mosterman, Rod Natros and the Van Noorts. Those friends and suppliers introduced me, in the past, to many new products and methods of retailing that made both them and me money. It had been an advantageous relationship to both parties. Things don’t stay the same. At this conference, Rob had a nephew working at the Pan American booth. The young man told me he was, “John’s boy” so that I had a perspective. He was bright, enthusiastic and he knew much about plugs. One of my missions was to find a good plug grower for a local greenhouse and I had narrowed it down to two plug greenhouses and he explained to me, the difference between the two growers. He knew what he was talking about. Part of accepting change is that much of your information is now coming from your friend’s adult children. If you don’t accept that, then you will be left behind.

On a different note, leaving this page, I always wonder, how many of you read this column? As one of my actor friends is fond of saying, “Without an audience, actors are only neurotic people speaking to an empty room.” I felt validated as people stopped me, many I had not met before, to tell me that they read Landscape Trades and that they read and enjoy my column. I write for people who want to read what I have to say, otherwise the room is pretty empty. Mind you, there was one fellow who didn’t hesitate to tell me that he has read my column and that he is much, much smarter than me. I didn’t argue. He was probably right. He must be smarter than me. He told me he was.

Staying up to date with new products and introductions, building mutually-beneficial relationships and having a good time with your peers is what trade shows and conferences are all about. Trade shows are not outdated. They are in addition to an online presence. Take them in and you will find that you are on the road to success.

Rod McDonald owned and operated Lakeview Gardens, a successful garden centre/landscape firm in Regina, Sask., for 28 years. He now works full-time in the world of fine arts, writing, acting and producing in film, television and stage.