That was very evident when Landscape Ontario staged the 38th annual awards night on Jan. 11 at the Doubletree by Hilton Toronto Airport Hotel.

Over 600 people enjoyed the Hollywood-quality presentation that honoured the best of the industry, and recognized excellence and the high level of professionalism among LO members. This year Haig Seferian was the MC, with help from Denis Flanagan. Both LO president Tom Intven and executive director Tony DiGiovanni handed out plaques to the
award winners.

The awards program is held in conjunction with Congress, Canada’s largest horticultural trade show, at the Toronto Congress Centre. The following day winning displays greeted those entering the trade show.

A special insert with this edition of Horticulture Review features all the winners in the categories of landscape construction, maintenance and design. As well, the list may be found on www.loawards.com.

LO president Tom Intven stated, “This gala tonight drives home my vision of prosperity through engagement. This evening encompasses our past, present and future as an association. We will be wowed by the pictures of the incredible work our members have submitted.”

“The excitement surrounding the awards programs just keeps building every year, and exceeds expectations,” said LO executive director Tony DiGiovanni. “Somehow, our members continue to reach new levels of craftsmanship, paired with breathtaking designs. Thank you to all those companies that entered the awards competition this year.”

Along with the general awards, a number of special awards allowed industry members to honour those deserving special recognition.

The LO president spoke in his welcome about a new award created in memory of long-time member Horst Dickert. This honour will go to any project submitted in the maintenance, design or construction programs that best uses native plant materials in a designed and/or implemented sustainable landscape.

In the summer of 2010, Horst Dickert passed away, leaving a huge legacy for the industry. Known as an expert in almost every area of horticulture, he was legendary in his encyclopedic knowledge of plants, especially native plants. In celebration of his love of native plants and landscapes, an award was created in his honour.

The first recipient of the Horst Dickert Award went to Parklane Nurseries, Beaverton, for its design entry, Satya Yoga Centre.

One of the most prestigious awards is the Dunington-Grubb Award. The 2010 winner is Oriole Landscaping of Toronto. This award goes to the most outstanding and highest-overall scoring project in the construction category.

Since the formation of Landscape Ontario, the prize has been given out annually. Karl Stensson, president of Sheridan Nurseries, presented this year’s award to Oriole for its project Modern Sophistication.

For the second year, The Don Salivan Award for Grounds Management was handed out by Gregg Salivan. He presented the award in the memory of his father to this year’s winner, Shades of Summer Landscaping and Maintenance of Hamilton.

The Landscape Ontario Alumni Club gives special recognition to former members of the association who are in the process of transition or retirement. Nominated by a special committee, Don Voorhees received the special honour for all of the contributions he has made to the association and the industry. Voorhees has had a long involvement with the Lawn Care Sector and Canada Blooms.

The Casey van Maris Award goes to the project deemed the most innovative and to have the most unique execution of design among all of the construction projects submitted to the Awards of Excellence. Casey van Maris’ granddaughter, Cassie Zalewski, announced that the 11th annual recipient of the award went to DA Gracey & Associates of Vaughan.

The Environmental Award is presented for outstanding contributions to the betterment of our environment. Ron Koudys, a member of the Awards of Excellence judging panel, presented this year’s award to Steven Peck, founder of Green Roofs for Healthy Cities, which has become the world’s leading advocate for green roofs and walls.

Dave Braun received the Frank Ewald Jr. Award, presented to a member who has shown a dedication to the industry and to our association, but hasn’t yet reached his or her 36th birthday. Don Chase, in making the announcement, stated, “Dave Braun is a third generation nursery professional. His grandfather and father were pioneers in the field, and Dave is following in their footsteps, making his own mark on the industry.” He has served as chair of the Growers Sector Group, and at the AGM on Jan. 12, was named as treasurer on the Provincial Board of Directors.

Along with being involved in his work with students, Koudys has been a long-time member of the LO Designers Sector Group, and played a key role in the creation of the Landscape Design Certification program. He has also been very involved with the London Chapter and participated on the Greening Highways project. Koudys has given of his time to ensure the high standards of the Awards of Excellence.

Michael Pascoe has served on the board of the London Chapter, as well as on the Provincial Board of Directors. He has sat on numerous committees and made outstanding contributions to the various community projects taken on by the London Chapter.

“Over the last three years, Sheridan Nurseries has developed a large pond at its Glen Williams Farm. It is almost impossible to understand how large the pond is just by looking at it. This pond holds 32 million gallons of water and covers 3.5 acres – with another three acres for collection and recycling,” said McMann.

Sheridan began the project to provide a back-up water source for irrigation, if the area was to experience serious drought conditions. However, a huge side benefit soon revealed itself for both the company and the environment. It is estimated that the pond has reduced the draw on local river systems by approximately 25 per cent. “Sheridan Nurseries is a pioneer in the industry and always strives to be more efficient while improving and adapting to environmentally-friendly growing practices,” said McMann.

Gerald Boot became one of a handful of Landscape Ontario members to receive the status of Honorary Life Member. In its 38 year history, the association has presented the honour to only ten people.

Haig Seferian told the audience that Gerald Boot has devoted much of his working life to building a vibrant and engaged community. “His service ethic is inspirational. He is always willing to give his time and resources to advance our industry, while enriching the lives of his family, his fellow members, his customers and community.”

He has served as President of LO from 2004-2006, Toronto Chapter president and on numerous committees, including Canada Blooms, Snow and Ice, and Publishing. Boot continues to serve as Landscape Ontario’s rep to CNLA’s Insurance Committee, and he’s facilitator to the Certification Committee, and special LO Executive Committee adviser on Canada Blooms.

On top of his volunteer commitments, he operates a highly successful business, Boot’s Landscaping. “Gerald embodies professionalism. He has been, and likely will continue to be, one of the most influential members of Landscape Ontario,” concluded Seferian.

Gerald Boot was joined by his wife Theresa, their children, and Gerald’s in-laws. In an emotional response, Boot thanked the membership for the honour, praising the association for the great progress and advancements made over the years. He also thanked his family for the patience they showed while he was busy with business and association work.

He noted that the evening was a complete surprise, and was impressed that his family knew about the honour well before the awards night. 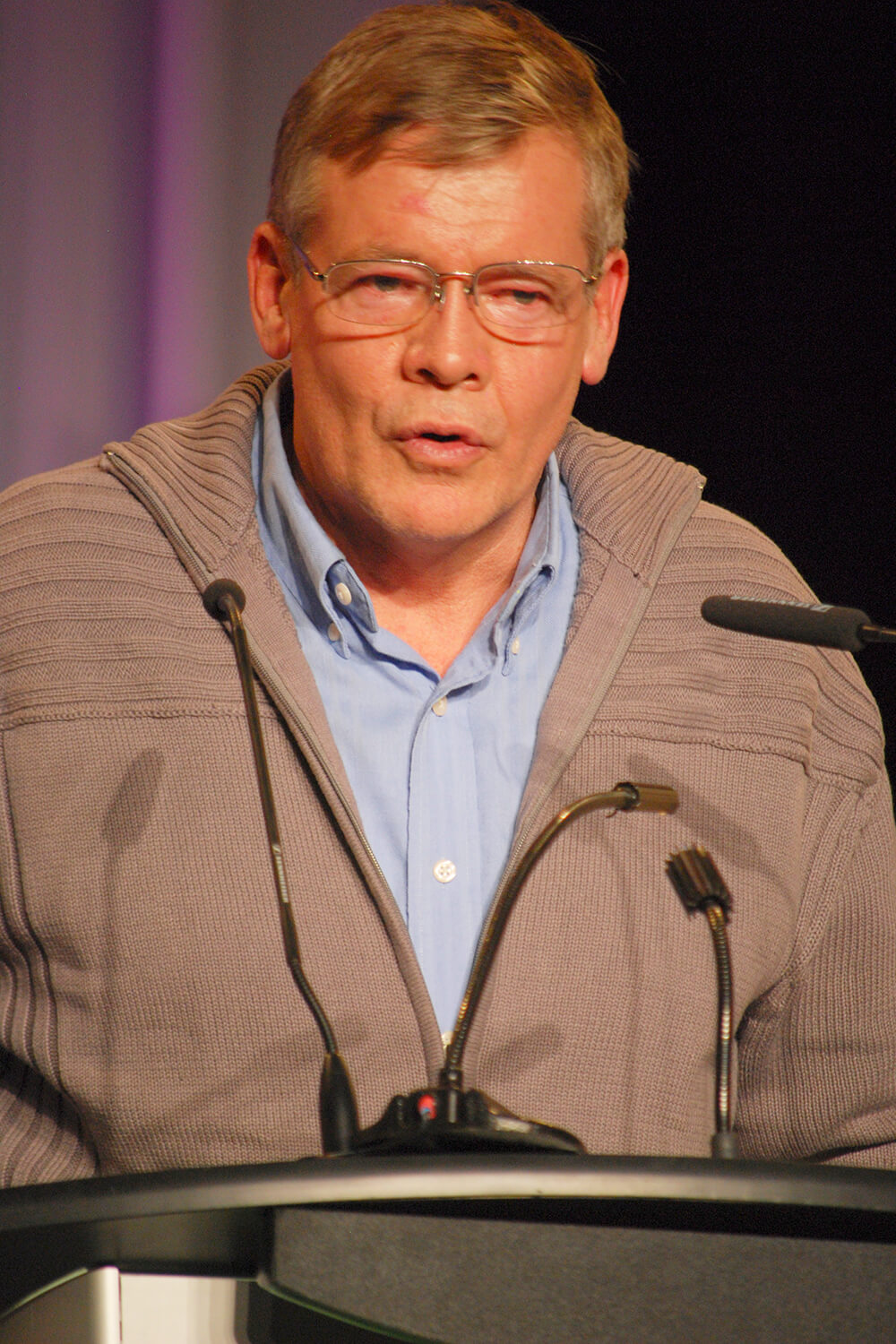 John Wright, president of the Ontario Horticultural Trades Foundation, read the list of scholarship recipients. They include: