Figure 1. Effect of Organo-sol on dandelions.

Following the cosmetic pesticides ban, a couple of new products have come to the marketplace for broadleaf weed control in turf.

Last year I reported on my research with the iron chelate-based product Fiesta. The following article discusses research conducted on another new broadleaf herbicide for turf under the name, Organo-sol.

It is a product developed by Lacto Pro-Tech, a Quebec company which commercializes products made from dairy ingredients. It is a division of the cheese manufacturing company Saputo.

Organo-sol is manufactured from fermented dairy ingredients. Active ingredients are citric and lactic acid (produced by lactic acid bacteria). As you can imagine, based on these ingredients, the product itself smells like a mixture of orange juice and sour milk.

It is labelled for the control of bird’s foot trefoil, black medick, clover and wood sorrel in established lawns. The product is applied as a mixture of 25 per cent Organo-Sol, three per cent  surfactant and 72 per cent  water, applied at a rate of 200 mL per m2. The surfactants on the label include XA Oil Concentrate, Kornoil Concentrate and Assist. The application needs to be repeated every 14 days for a total of five applications.

A research trial was conducted following the label rate and timing directions. Treatments were applied in 2010 on May 26, June 7, June 21, July 5 and July 19. A different surfactant mixing process, other than what was suggested on the Lacto-Pro Tech label, substituted LI700 from United Agri-Products. The research site was an area of established turf (a mixture of Kentucky bluegrass and turf-type perennial ryegrass infested with dandelions, black medick, clover, narrow-leaved plantain and other lawn weeds). Turf was maintained as a low- maintenance turf with weekly mowing at 6 cm, no supplemental irrigation and fertilized once a year with 0.5 kg N/100m2.

Treatments were untreated control, using Organo-sol at the label rate and Par III (a herbicide consisting of 2,4 D, mecoprop and dicamba), also applied at label rate. Each treatment was replicated four times in 2 x 2 m plots in a randomized complete block design.

The percentage of  coverage of each weed species (dandelion, black medick, narrow-leaved plantain, broadleaf plantain, bird’s foot trefoil, clover and mouse-eared chickweed) was recorded in each plot on June 11, June 17, June 30, July 15, July 29 and Aug. 13. Four randomized point quadrants, measuring 60 cm x 60 cm, with 25 points in each quadrant (points 10 cm apart), for a total of 100 points in each plot, were used to record estimated percentage of broadleaf weed cover of the each of the weed species at each assessment date.

All measurements were analyzed by the appropriate statistical process. The only broadleaf weed species that were in high enough numbers to observe significant differences were clover, dandelion and black medick and total weeds, and only these will be reported here.

Organo-sol gave poor control of dandelions (Figure 1), but this is known, and dandelions are not listed on the Organo-sol label. Organo-sol did give good control of clover (Figure 2), black medick (Figure 3) and total broadleaf weeds (Figure 4). Organo-sol gave the same level of control for clover and black medick as Par III, reducing the clover by roughly 70 per cent. Overall, the total weeds were reduced by Organo-sol by 66 per cent, but the reduction was not as great as the reduction in total weeds with Par III, which was a 95 per cent over the untreated area. 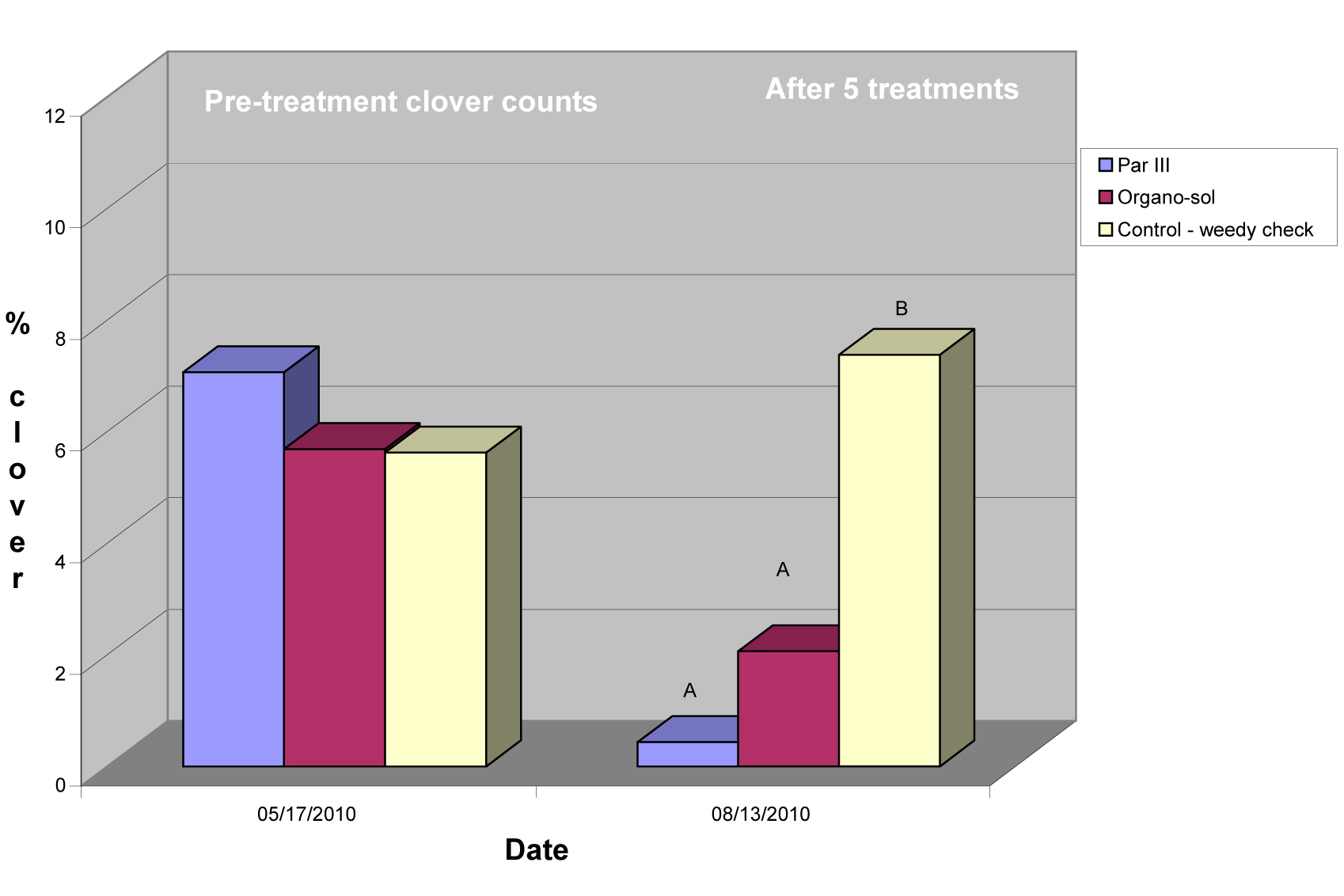 Figure 2. Effect of Organo-sol on clover. 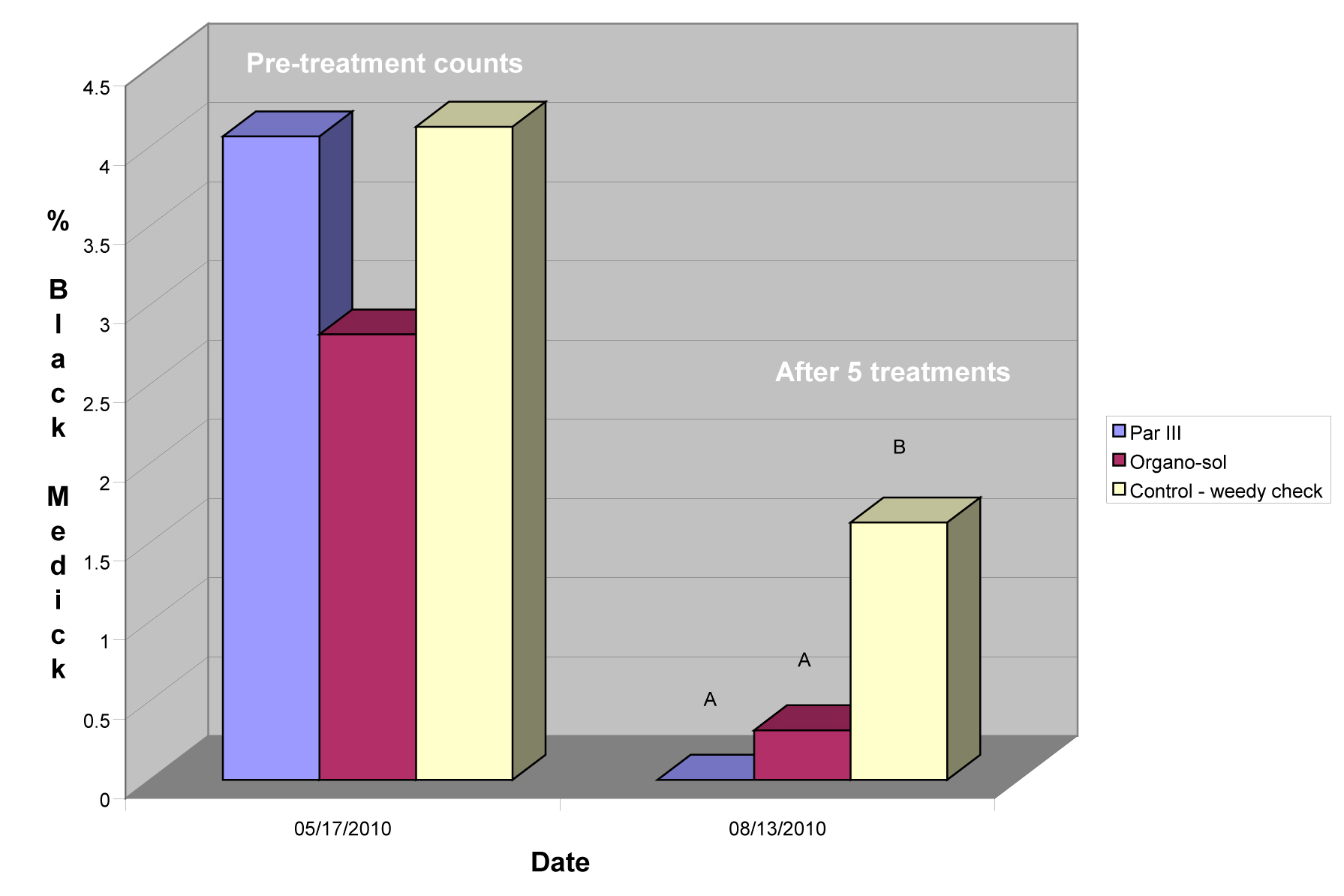 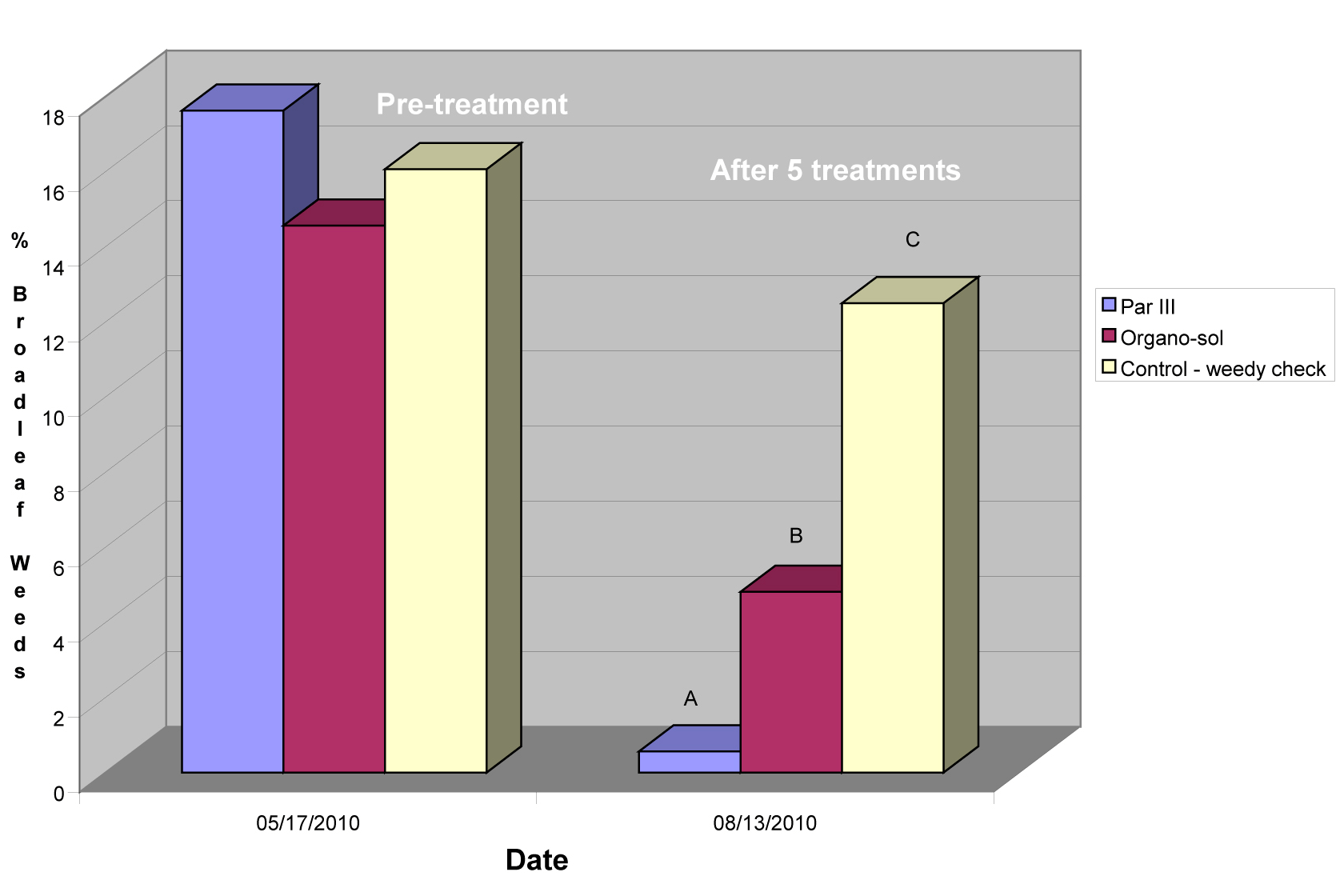 Figure 4. Effect of Organo-sol on broadleaf weeds. Organo-sol, when applied according to the label, with the addition of the surfactant LI700, did provide significant control for clover, black medick and total broadleaf weeds in this study. Though not reported here, a trial including Organo-sol was conducted by Cynthia Siva for her Master’s research project, using the surfactant Assist and the efficacy is much lower than with LI700. Organo-sol was phytotoxic to turf and the phytotoxicity one week after treatment. It is unclear whether this level of damage will be acceptable in the marketplace.  In addition, the smell of the product is unpleasant and may also have a bearing on how well it is accepted in the marketplace. The need for five applications in a season for efficacy may also be a deterrent to the adoption of this new product by the lawn care market. At the time of writing this article, Organo-sol has received registration from the PMRA, but it has yet to be classified in Ontario by the Ontario Pesticide Advisory Committee. Pam Charbonneau may be contacted at 519-824-4120, ext. 52597, or by e-mail at pamela.charbonneau@ontario.ca.
Share
Tweet
Mail