A hardcover book, filled with photographs of the Saugeen project, has been published by Menno Braam. Entitled Building Walls and Workers for the Future, it contains history of Saugeen First Nation #29, background on the project and images of the men and women involved with the project. The book may be purchased online at http://gfl.me/x2By. Proceeds go directly to the Saugeen Amphitheatre Rejuvenation Program.

But the project, led by dry stone guru Dean McLellan of Dean McLellan Stonework of Holstein, is not just about building walls and stairs. It’s much more complex than that. This ambitious undertaking is also about educating and teaching men of the Saugeen First Nation in the craft of dry stone, while maintaining the legacy of the community from past generations to the next.

One of the first tasks of the crew was to rebuild the staircase connecting the two levels of the property. The result of this work, begun in 2013, is an amazingly beautiful staircase of stone that combines with the awesome view overlooking the Saugeen River.

Upon viewing the impressive-looking Saugeen Amphitheatre, it makes one pause to also admire the ambitious and difficult task facing the crew to rebuild the Amphitheatre. Built in the early 1970s, it is one of the largest dry stone projects ever built in North America, with a capacity for 1,500 people. Unfortunately, due to a lack of understanding of correct dry stone building techniques 45 years ago, the Amphitheatre structure is now failing.

“There are some areas that are unsafe, with places where the stone is falling,” says McLellan. He explains that if built properly, dry stone structures will last hundreds of years.

McLellan says, “The men of Saugeen are learning this craft which will provide them with a skill that very few people have achieved. When we first began, not everyone appreciated the craft,” remembers McLellan. Members of the Saugeen crew now understand the complexities and hard work required of dry stone installations, and how fortunate they are to have someone with Dean McLellan’s skill and dedication to teach them those skills.

To help make the plan to restore the site a reality, McLellan was joined by Richard Nancarrow, project manager and engineer; Patrick Callon, landscaper and teacher; and Menno Braam, certified dry stone waller. 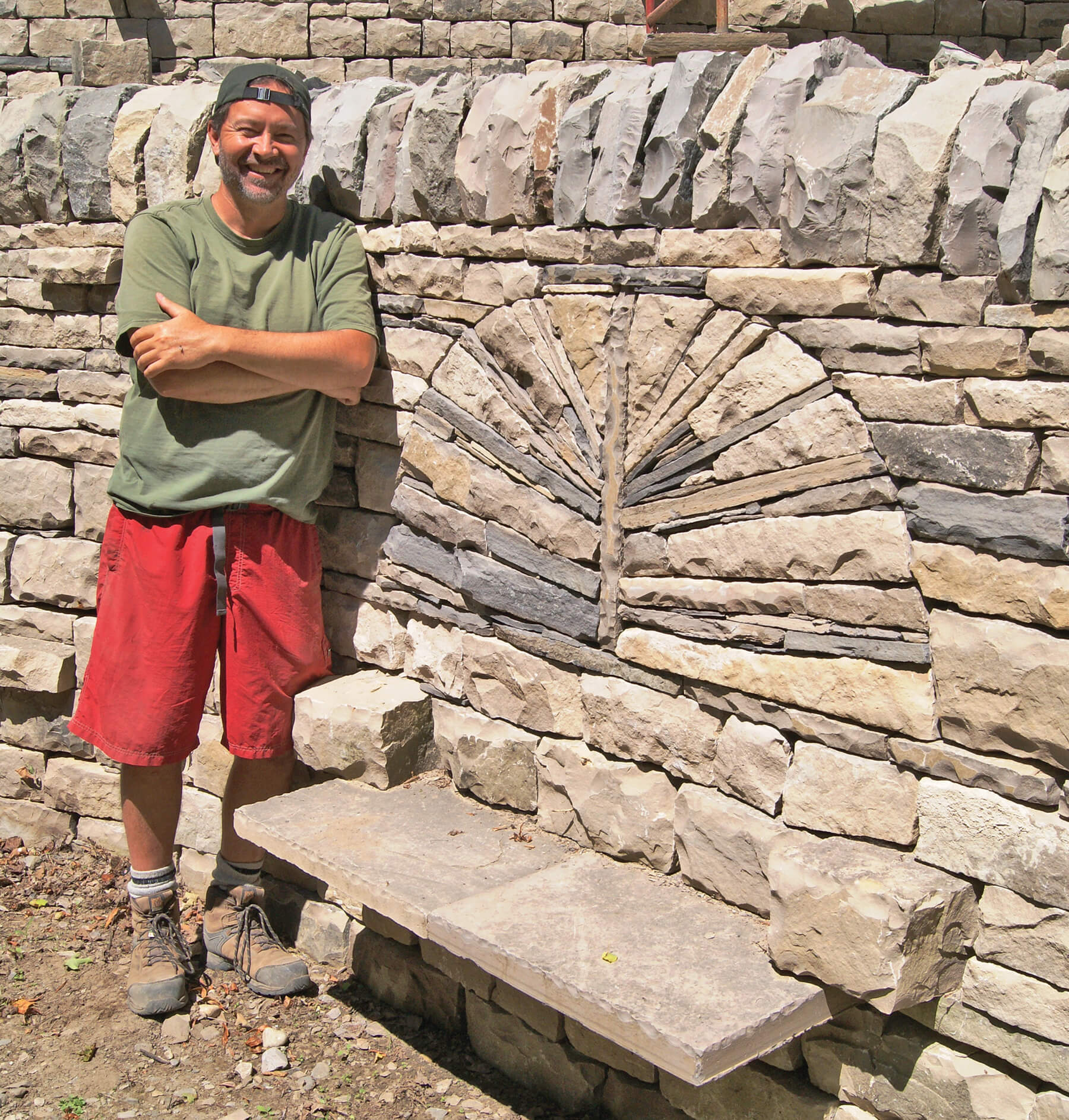 Dean McLellan poses at one of the dry stone walls at Saugeen. Throughout the walls, there are unusual designs that demonstrate the talent and creativity of the crew.

McLellan estimates that thousands of tons of stone worth millions of dollars were already onsite, but he says Upper Canada Stone has been a major benefactor of the project. “Every year the company provides us with an endless amount of stone,” he says.

Saugeen First Nation’s Program Manager and Employment and Training Officer Jennifer Kewageshig says, “What’s great about this project, is it started as a training opportunity, and has now turned into an apprenticeship program. Many of those on the crew hope to do stonewalling as a trade.”

Nathan Thompson, a resident of Saugeen and the foreman of the crew, is working on his level two certification. “I am going to stay with this project as long as I can,” he said. One must reach four levels of certification to qualify for the level of Master Craftsman.

Says McLellan, “Jennifer (Kewageshig) is the reason we are here creating these structures and teaching the men a new skill.” He adds, she had to sell the idea of the project to the Band Council, before anything could move forward. “She continues to be a strong advocate of the project,” says McLellan.

This summer a hardcover book, filled with photographs of the Saugeen project, was published by Menno Braam. The book, entitled Building Walls and Workers for the Future, contains history of Saugeen First Nation #29, background on the project and images of the men and women involved with the project. The book may be purchased online at http://gfl.me/x2By. Proceeds from the sale of books will go directly to the Saugeen Amphitheatre Rejuvenation Program and help ensure its completion.

Dean McLellan’s love of dry stone walling began at an early age. He remembers watching his grandfather, who was a stone mason, build walls without the use of mortar. After graduating from university, “I played beach volleyball earning money from sponsors and working on restoration projects.”

He says his skill set increased with dry stone, after he was fortunate to have the opportunity to go to Britain to work with the best artisans in the world. The improvement in his skill soon earned him his certification designation of Master Craftsman. He is the only person in Canada to hold that distinction bestowed by the Dry Stone Walling Association of Great Britain. McLellan is also the only approved examiner in Canada. 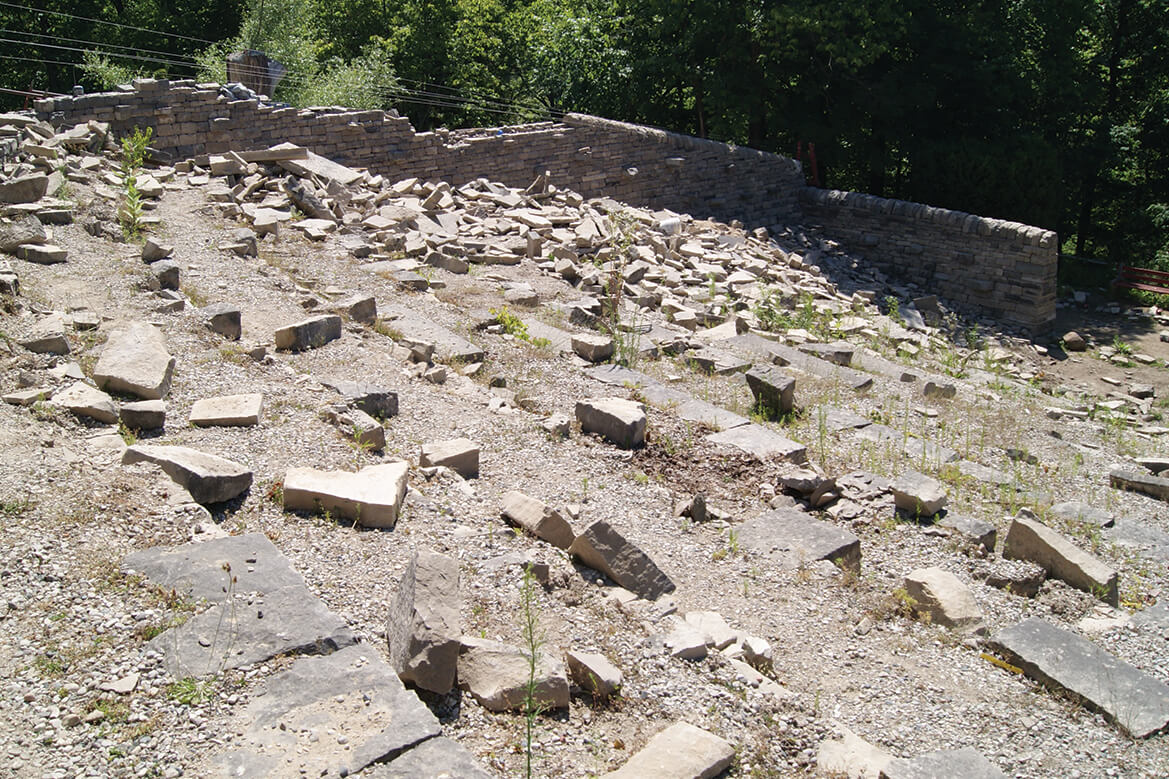 Members of the Waterdown staff gather for a group photo.

For the past ten years McLellan has been passing on his craft to others in Canada, along with his work in Saugeen. Many Landscape Ontario members and visitors to Canada Blooms are well familiar with the structures in the Association’s garden created by McLellan, such as the lighthouse, urn and this year’s climbing wall.

He is the Faculty Associate at Willowbank School of Restoration Arts in Queenston, where he helped organize and run a large scale dry stone walling festival. He was also involved in organizing the Stonewurx Festival in Hanover in 2012.

This past spring McLellan and the crew travelled to Cobourg to build the front entrance roundabout at the Northumberland Hills Hospital. The project was a joint partnership of Landscape Ontario, Upper Canada Chapter and the Rotary Club of Northumberland Sunrise. The project was completely funded and installed by the groups, and provided to the hospital at no cost.

This summer, the Saugeen Stone Festival was held Aug. 15-17, at the Saugeen First Nation in Southhampton. It was a celebration of stone, arts, the environment and community, featuring live music, local artisans, workshops and more. Landscape Ontario was one of the sponsors.

Organizers were very excited about the two-day stone carving course by world-renowned stone carver Nicholas Fairplay. “Those people who took part had a very unique opportunity to see first-hand the talent of Nicholas Fairplay,” said McLellan. The event also included a dry stone competition and courses for the public.

For McLellan, the project at Saugeen is more than laying down stone. For him, “It’s very hard work that provides great satisfaction in seeing the end result, but it’s also so rewarding to see the men here progress so well, in so many ways.”
Share
Tweet
Mail