Adding to the fun at the annual Awards of Excellence ceremonies was the appearance of some famous faces. Award winners taking the stage were surprised to find Jay Leno among them.

Share
Tweet
Mail
More than 600 industry professionals took in the always-impressive Awards of Excellence ceremony at the Toronto International Plaza Hotel, where the best in the business were honoured for their work on Jan. 6

The annual awards night featured MC Frank Ferragine of City TV’s Breakfast Television, along with a live band providing an upbeat mood before the announcements of the winners. This year featured a talk show format, with Ferragine interviewing special guests throughout the night.

The following day, images of the award winning projects were displayed for attendees entering the trade show. It was a great opportunity to show off the breathtaking design and master craftsmanship in landscape construction, maintenance and design projects created by Landscape Ontario members.

A number of special awards were handed out during the ceremonies.

For the second consecutive year, The Landmark Group of Thornbury won the prestigious Dunington-Grubb Award. The award goes to the most outstanding and highest overall scoring project in the construction categories.

Other top awards went to Pro-Land Landscape Construction, winning the Casey van Maris Award, and Cedar Springs Landscape Group, which took the Don Salivan Grounds Management Award (cover). The Salivan Award goes to the company judged to have entered the best grounds management project. The Casey van Maris award is given to the project awarded the highest marks for execution of unique and innovative design in landscaping.

The Community Leadership Award is given to a member who makes a significant contribution to the community through their horticultural work. Sasha Hunter was given the award this year for her work with the Perry Molema Memorial Garden. 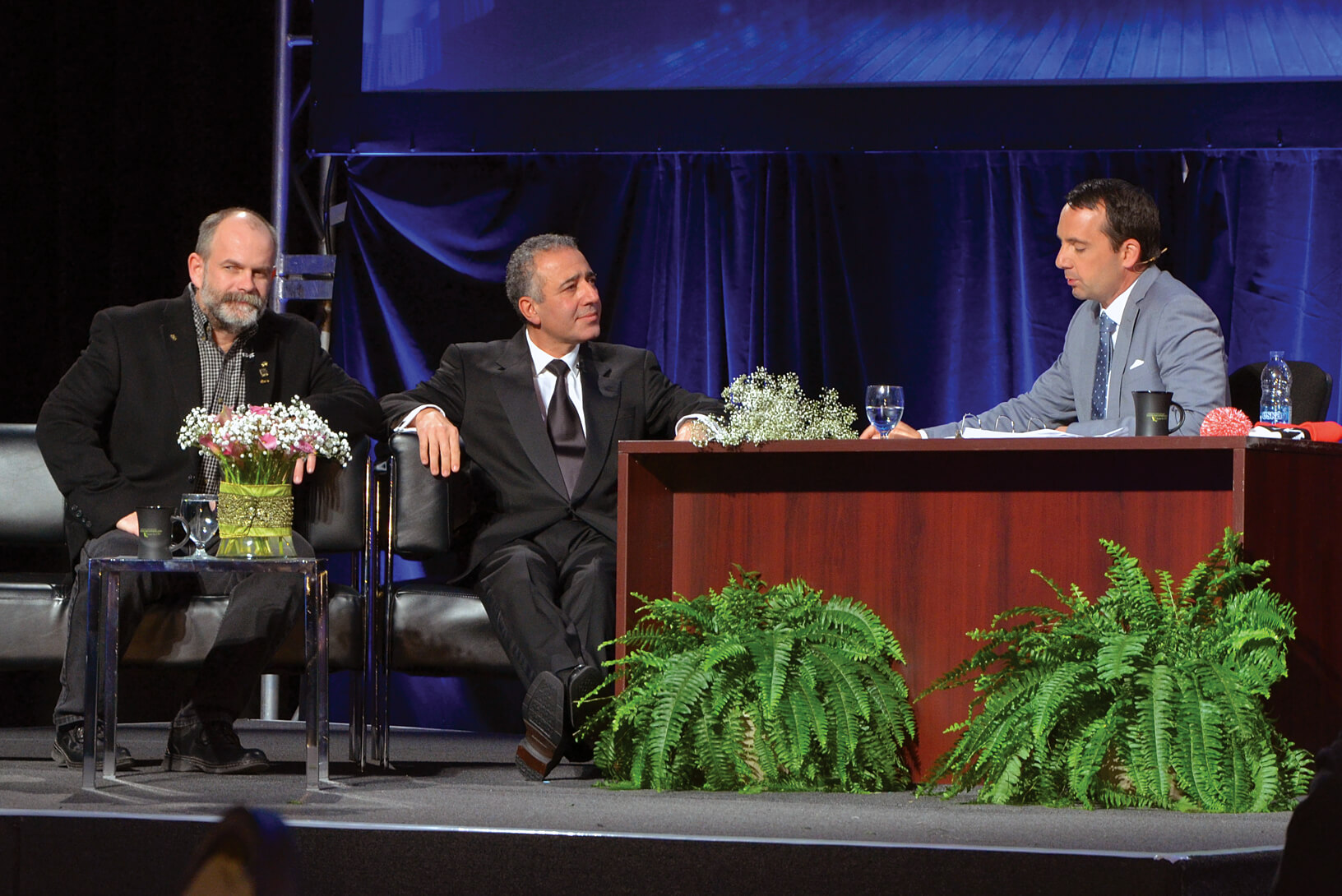 This year’s Award of Excellence took on a talk show theme. Here MC Frank Ferragine interviews LO 2nd vice president Paul Brydges, left, and Haig Seferian CLD. Guelph couple, Margaret and Ivan Stinson, are long-time volunteers and supporters of the horticulture industry. They were presented with the Legacy Award. This award recognizes a lifetime of achievement in the horticulture industry, and is given to those who not only impart their knowledge on the people around them, but who leave something for the next generation.

The Environmental Award goes to an organization or individual for outstanding contributions and achievement in maintaining or promoting a sustainable healthy environment. This year Ken Jewett of Maple Leaves Forever was honoured for his long-term work in promoting the planting of maple trees. Landscape Ontario took the opportunity to show appreciation for his tireless work toward environmental stewardship and leadership.

Well-known dry stone expert Dean McLellan was a popular choice for the 2015 Past Presidents’ Award. A committee of three past presidents of Landscape Ontario named McLellan for his outstanding contributions to the association.
The other recipient of a Past Presidents’ Award was Upper Canada Stone, for the company’s continual support and contributions to the association.

Michael Van Dongen of Van Dongen’s Landscaping and Nurseries in Hornby received the Frank Ewald Jr. Award, which goes to a Landscape Ontario member who has not yet reached their 36th birthday, and has made an outstanding effort in the promotion and betterment of our association. Van Dongen is chair of the Garden Centre Sector Group and member of the LO Board of Directors.

Denis Flanagan, Director of Public Relations and Membership at Landscape Ontario, says, “We are very proud to honour the men and women who make up Ontario’s green industry.”

To view a video of the Awards of Excellence ceremony, go to http://gfl.me/x2qc.