Scott Duff understands the importance of public persona. From professional photographs to his mainstream media exposure, Duff knows that it is important to present a professional image to the public.
In a short period of time, Scott Duff has come from a relative unknown to someone who has achieved one of the highest media profile within the landscape industry.

Duff owns and operates Aura Landscaping in St. Catharines. Up until 2010, Duff was working seven days a week at both the job sites and his office. “It was me and one other person working from 7 a.m. to 10 p.m.,” says Duff.

The next year changed everything for Duff and his company. “Building a garden at Canada Blooms changed my business and life forever,” says Duff. “While I was at Blooms, I realized this would be a game changer.” He was right. Following Blooms, Duff’s business doubled almost overnight.

The second year at Canada Blooms, Duff worked to catch the attention of anyone with a media badge or camera. “I literally grabbed anyone I thought would be able to get Aura Landscaping in the news.” He also made a connection with Bryan Baeumler’s group from HGTV. “They approached me to become a Baeumler-approved contractor” says Duff.

From there the ball rolled faster down the hill. Duff has appeared on Cityline TV, Breakfast Television, CTV News, CP24, The Weather Network, CHCH and more. He has also been featured in a number of magazine and newspaper articles, including Canadian Gardening and Toronto Star. Along with being the subject of these media outlets, Duff now writes for HOSS magazine, a home renovation resource publication.

The positive and extensive publicity has contributed to Aura Landscaping’s tremendous growth in business, allowing an expansion into Toronto, Oakville and Burlington. The above-average exposure has moved Aura Landscaping among the top sites in Google searches for landscapers. 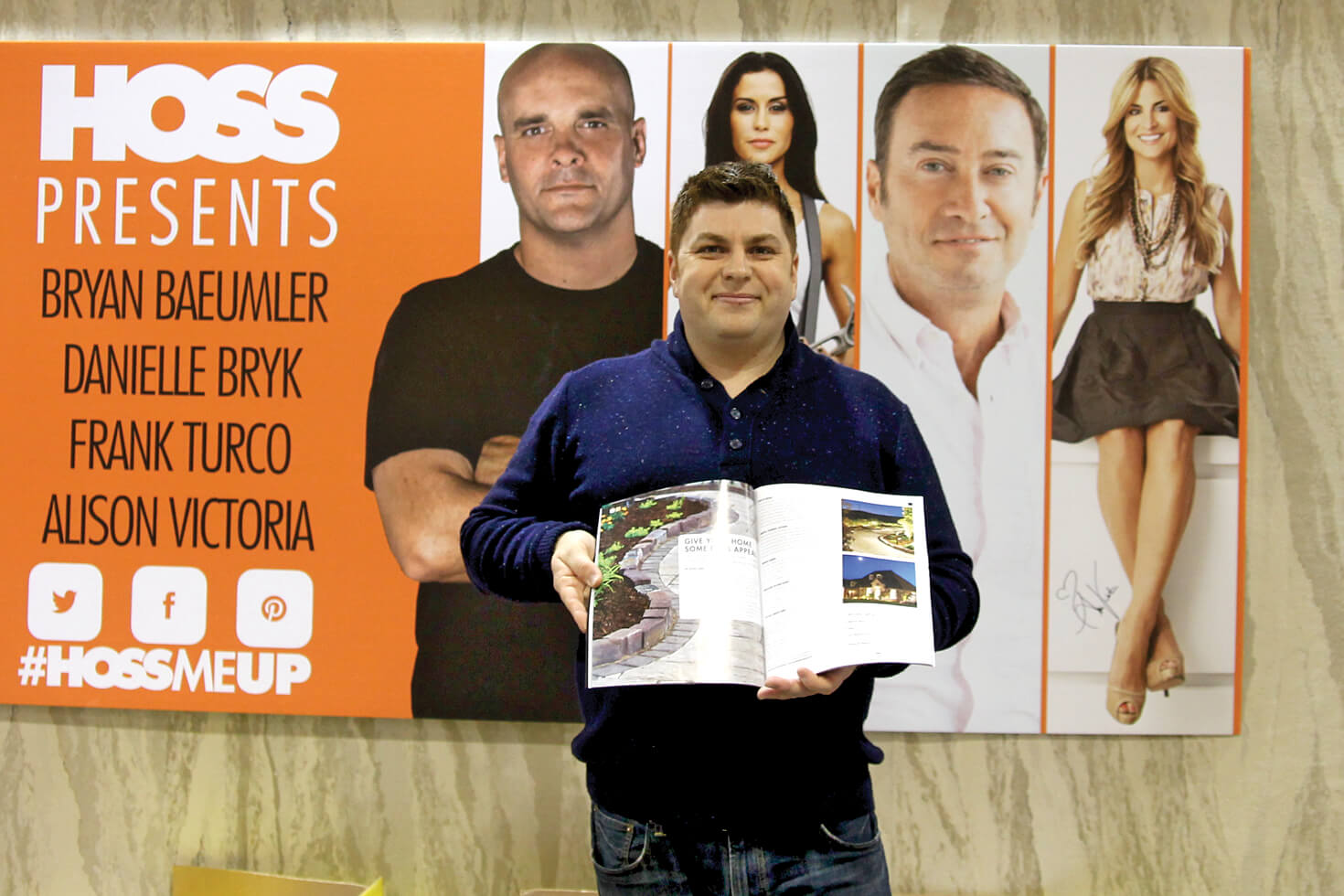 Scott Duff displays the edition of HOSS magazine which contains his first column.

Duff says that he uses a three-tier approach to his marketing. These include social media, mainstream media and traditional mail.

He created extra revenue by selling sponsorship ads on Aura Landscaping’s website. Each logo links to a specific supplier and major corporation. The page brought in $5,000 in funds and over $30,000 in supplies and equipment.

Another unique method used by Duff is through traditional Canada Post mail, but targeting recipients through Google’s Street View system. “I look at homes in communities using Google Street View, looking at those which appear to be the right fit for the work we do, or need an upgrade. I then mail out my postcards to that area in the community.” He estimates that from the $10,000 postcard program, he received $200,000 worth of work.

The third tier is his free exposure in mainstream media. Duff aims for an appearance in newspapers, radio and TV at least once each month.

Duff believes you need to work hard for what you want. “It won’t come to you without a fight. You have to be strong and courageous and know that you can do anything you put your mind to.” Duff knows from first-hand experience that you must keep on believing in yourself.

Growing up on a farm in Rockway, Duff attended West Park Secondary School. “After being voted least likely to succeed, and bullied on a regular basis, I was determined to go out and make it on my own,” says Duff.  He jumped right into starting a landscape business. With no background in running a business, he struggled for two years before deciding to do it as a side business. 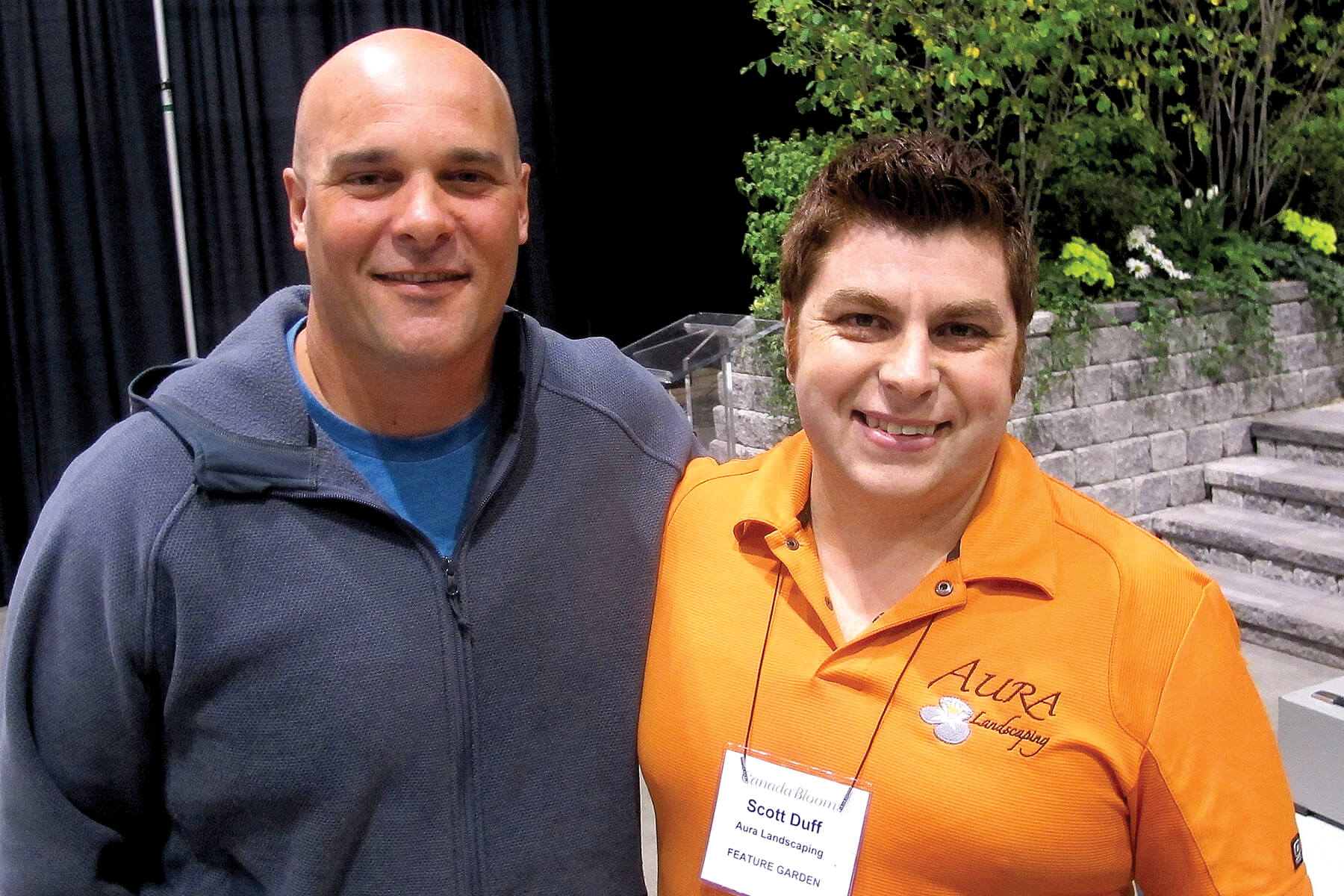 “I was not deterred by the failure and from people discouraging me to try again,” says Duff. He spent the next 15 years working for other companies. “I proved my worth in sales and business, all the while pursuing my passion of landscaping on weekends and evenings. Over time, I learned about the landscape industry by going to suppliers and asking them to teach me. I told them I would be a customer for life.” He has kept that promise, now buying from those who taught him. “There are times when I pay a higher price to support those suppliers who were loyal to me before I started my business, but I don’t mind because of what they did for me is far more important than price.”

Duff now looks back on his early days and smiles broadly when he talks about being nominated for the Niagara Entrepreneur of the Year Award and winning the Top 40 Under Forty Business Achievement Award. “I never thought I would win such an award,” says Duff. “When I received the telephone call that I had won, I was like a little kid jumping for joy.” 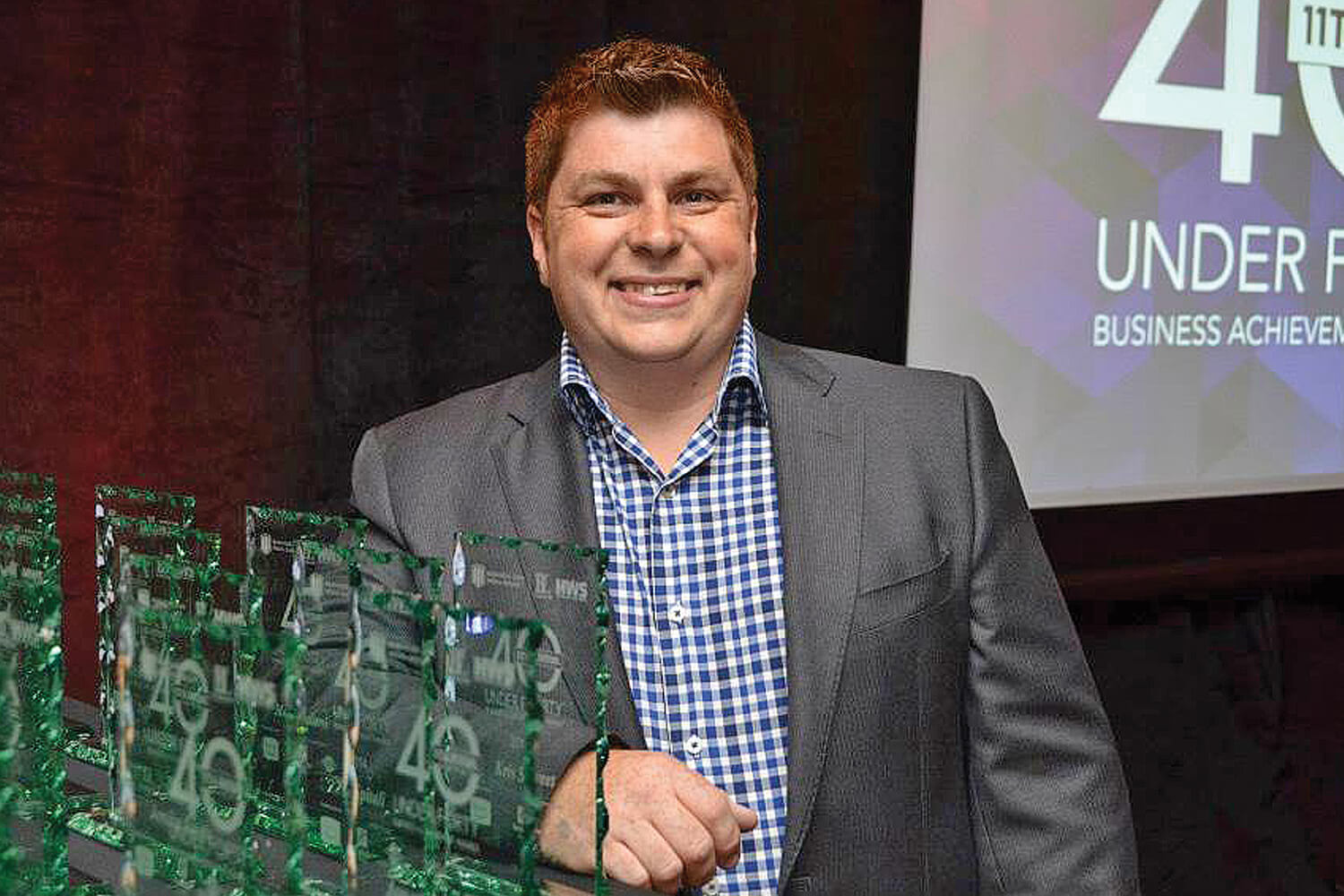 Duff after receiving the Top 40 Under Forty Business Achievement Award.

Gives back to community

The young entrepreneur also gives back to his community. Organizations he supports include Habitat for Humanity, National Tree Days at local schools, and the Baeumler Family Foundation. Duff also became a member of Landscape Ontario’s Golden Horseshoe Chapter’s board of directors. “It’s a great way to give back to the industry,” he says.

Duff says that working with Landscape Ontario has been a breath of fresh air. “The members of the board respect each other’s opinion. It’s obvious the ultimate goal is to improve our industry.”

He adds that if not for Landscape Ontario, he wouldn’t be where he is today. He has proven that belief in self and your industry attracts positive results.

Scott Duff understands the importance of public persona. From professional photographs to his mainstream media exposure, Duff knows that it is important to present a professional image to the public.