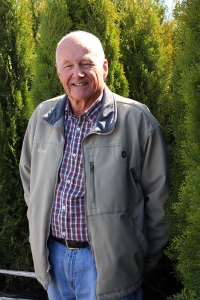 Paul Olsen is one of the most respected names in the Canadian nursery industry.

The journey to achieve that status in the industry was at times difficult. At a young age, Olsen began helping his dad in his garden maintenance business. He left school in grade ten when his father Ejnar passed away. “My education was hands-on,” says Olsen.

A family friend and mentor, Don Jennings, encouraged him to find a vocation. Jennings at the time worked at Weall & Cullen. “The Ontario Agricultural College was offering the Ontario Diploma in Horticulture (ODH) correspondence course, and Professor John Weall encouraged me to take the course, while I worked for Weall & Cullen,” said Olsen.

In the meantime, Paul Olsen was making an impression on the business’s owner Len Cullen. “I worked at everything from delivery truck driver, sales to eventually garden centre manager by the age of 19,” said Olsen.

At the age of 23, Olsen decided to strike out on own to start a landscaping business. He remembers the great support Len Cullen gave him. “He (Cullen) told me that if I went out on my own, that he would provide me with his contacts as they were going to exit that phase of their business.” More importantly, Olsen remembers the many life lessons Len Cullen taught him. “He taught me that no matter what your position in life, if you worked your butt off, you will succeed.” It’s an early lesson that Olsen never forgot.

Family issues became a priority after his wife was diagnosed with what was thought to be a serious illness. This later turned out to be a misdiagnosis, but Olsen had made the decision to sell his business and began working for Amsen Associates, one of the largest landscape companies in the province. He was responsible for developing the wholesale nursery side and sod parts of the business known as Assagi Nurseries. “I took a few years to be close with my wife and our three children,” says Olsen.

Business was booming, but the nursery company’s decision to liquidate that portion of the business moved Paul Olsen on to an exciting new chapter in his life. He decided to purchase the trees and equipment from Assag. In 1977, Olsen began Treeland Wholesale Nursery in Mississauga with partners Irv Goddard of Meadowlands Nursery and Ib Petersen, whose two sons, Eric, responsible for logistics and shipping, and Mike, the company’s purchasing agent, still work at BTN.

“In the first year, we went from zero to one-million in sales,” says Olsen. Business continued to flourish throughout the late 1970s and early 1980s through strong relationships with the largest landscape contractors in the province.

“We were the first to bring tree spades into Ontario,” says Olsen. During that time the company took on prestigious projects such as Canada’s Wonderland, the Peace Garden in Toronto and most of the Bramalea Street tree supply. “We were also the first company to ship trees during the summer, allowing major landscapers to continue their planting projects throughout the summer months.”

A huge step was taken by the company with the merger of Treeland and Brookdale Kingsway Nurseries. Brookdale Kingsway had large land and inventory holdings, while Treeland had the sales channels to support them. It became the first national nursery of its kind with locations in British Columbia, Ontario, Quebec and New Brunswick.

The recession in 1993 resulted in the company consolidating its operations, and closing the facilities in Quebec and British Columbia. The core operations were returned to Ontario.

The difficult times saw BTN re-brand itself within the emerging opportunities of the big box retail sector. The company again flourished, becoming one of the largest suppliers of live plants to retailers and landscape contractors in Canada.

The expansion included five locations; one in British Columbia, three in Ontario and one in New Brunswick; to serve every market in Canada. The company also provided flowering greenhouse crops, tropical plants, specialty fruits, vines, patio containers, as well as holiday greenery.

Paul Olsen is also proud that his company was and continues to be a family business into 2016. “My wife did the books for the company, starting in 1977 to the late 1990s,” says Olsen. “It was only the last couple of years she drew any pay,” he says with a smile.

In 2011, Paul Olsen sold the operation to his son Jeff. “All three of my children work in the industry,” says Olsen. Son Peter operates MD Growers in Niagara-on-the-Lake, while daughter Diane runs the HR department that administers BTN’s 300 peak time employees.

Paul Olsen is also as well-known for his work to improve the industry, as he is for his business savvy. He again credits Len Cullen for inspiring him to become involved in industry associations. “Nearly 57 years ago, Len was involved in the Ontario Nurserymen’s Association. He inspired me to also get involved.”

Cullen did a great job inspiring Paul Olsen, who went on to serve his industry so well, that Landscape Ontario made him an Honorary Life Member. He served as the Association’s president from 1996 to 1997, and president of the Canadian Nursery and Landscape Association from 2005 to 2007. The highlight of his term in office was leading a trade mission to China in 2007.

There’s a famous quote that describes how Paul Olsen has approached his life and work, “I learned the value of hard work by working hard.” It’s his philosophy success that he learned so long ago.