The Elephant Head drew a great deal of attention in this year's Trial Gardens.

In Ontario, it’s almost impossible to talk about gardening without talking about the weather. This article is no exception.

The trial gardens in Guelph and Milton experienced extreme rainfall and cool growing conditions early in the 2013 growing season. Plant types that typically perform well under warm and sunny conditions struggled, if they survived at all.

It was especially noticeable in some of the petunia trial entries; plants that looked good coming out of the production greenhouses suddenly stopped growing and declined once outside. Not all of the petunias behaved this way, since some cultivars actually thrived and went on to become the best performers of the 2013 season. These results further underline the importance of trialling plants through multiple growing seasons in a variety of different locations.

I have highlighted some of the best performers from the 2013 trial season in Ontario. Most of the plants described are new to the horticultural trade, while others are simply new to the trial program.

Sometimes during the trialling process, certain plants sneak up and surprise you with exceptional performance. Such was the case with Elephant Head that was trialled in the cutflower section of the trial garden. In its seedling stage, Elephant Head looks similar to its weedy relative (pigweed), but gradually develops a prominent rosy purple inflorescence on a sturdy stem that reaches heights of at least a metre. This unusual appearance attracted the attention of all who visited the trial garden. This plant appears to be very effective in mass plantings where visual impact from a distance is required.

The Surefire series of hybrid begonias grows very large under conditions of full sun and partial shade. Surefire has larger flowers than most fibrous begonias and its season-end height, of at least a half-metre, helps it truly stand out in the garden. This series is currently available with red- and rose-coloured flowers. 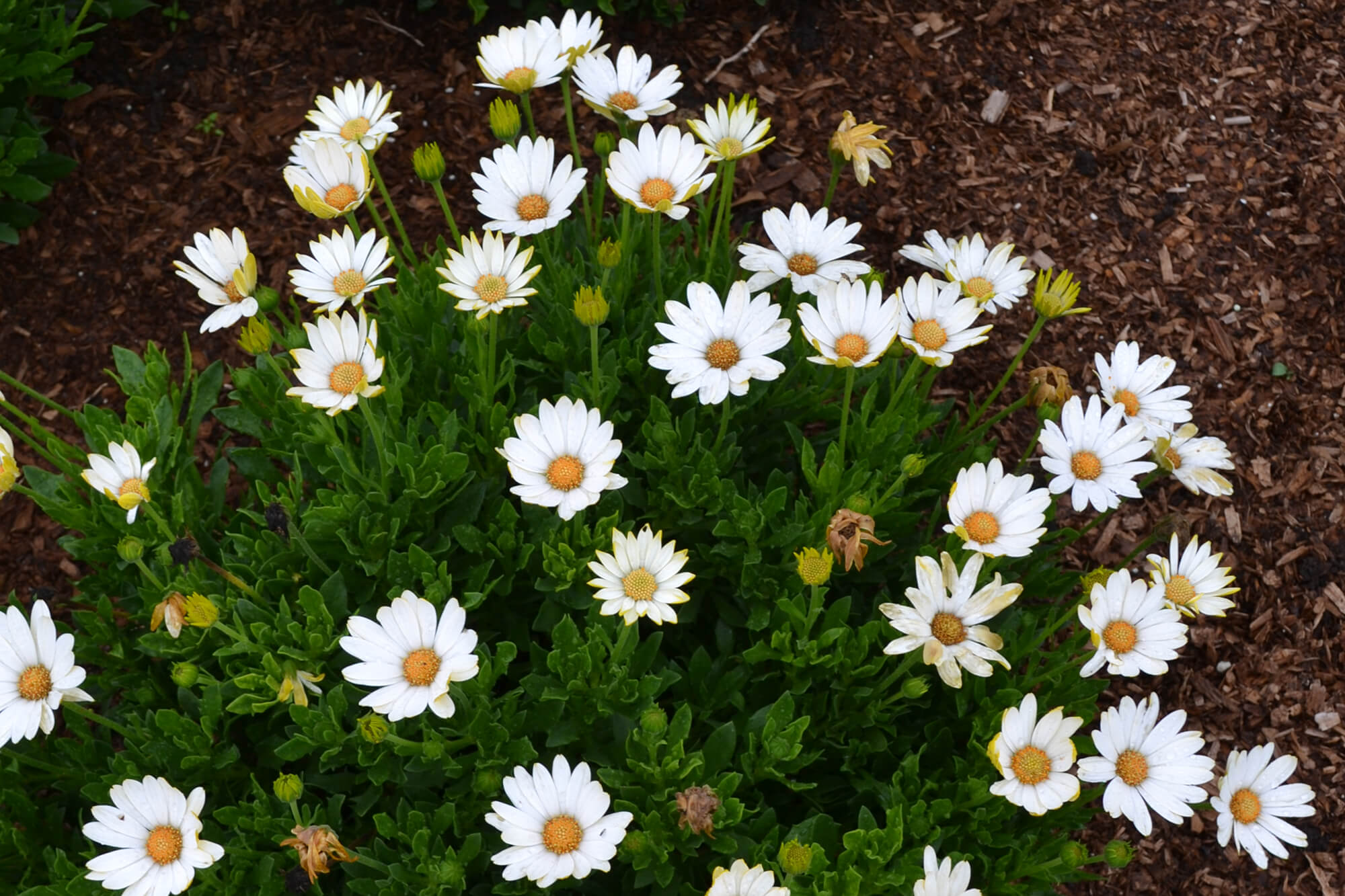 The Cape daisy has excellent heat tolerance. The Dragone series of hiemalis begonia continues to expand its colour range: red, pink, creamy yellow/orange, off-white. In 2013, we trialed Sunset and Dusty Rose. Unlike the Surefire series, this plant does best in shade to partially shaded conditions; here is another alternative to impatiens in the shade. The powdery mildew resistance on these begonias is very good, allowing the plants to perform well up until frost. This type of begonia was originally used almost exclusively as a winter houseplant; breeding and careful selection have identified cultivars that will grow well outside. The Dragone series is a good example of this plant improvement work.

For a second consecutive year, a gomphrena series has come to the forefront in performance. The PinBall series from Sakata Seed caught the eye of all visitors to the trials in 2013. There are three colours in the series: purple, white and lavender/white bicoloured. Performance was best in well-drained root zone locations. In our drought bed at the Landscape Ontario office, the plants flourished, but succumbed to root disease in a poorly drained or irrigated bed. The mounding growth habit is very attractive and individual plants can spread as much as 60-80 cm and reach heights of 40-50 cm.

In response to the changing landscape scene where Impatiens walleriana (shade impatiens) are no longer an option for shade beds, because of impatiens downy mildew, plant breeders are providing the industry with alternatives. New Guinea impatiens appear, for example, resistant to the disease and are available in a broad range of colours. Most NGI in the marketplace are propagated vegetative; most bedding plants produced from cuttings are sold in large formats such as the more expensive 4.5 in. pots. In recent years, new seed-propagated NGI have started to reach the marketplace. Seed propagation, as a rule, is less expensive than vegetative propagation but the range of colours is currently less extensive. In 2013, the new Florific series of seed-propagated NGI was trialled. This series is currently available in solid colours of lavender, violet and white.

This genus is usually called the Cape daisy and typically has petals of shades of white and purple with a blue button centre to the daisy. A new Cape Daisy from Ball, White Lightning, has white petals and a yellow centre. Unlike many cultivars of this genus, White Lightning has excellent heat tolerance and will bloom continuously throughout the summer. This plant definitely benefits from regular deadheading. 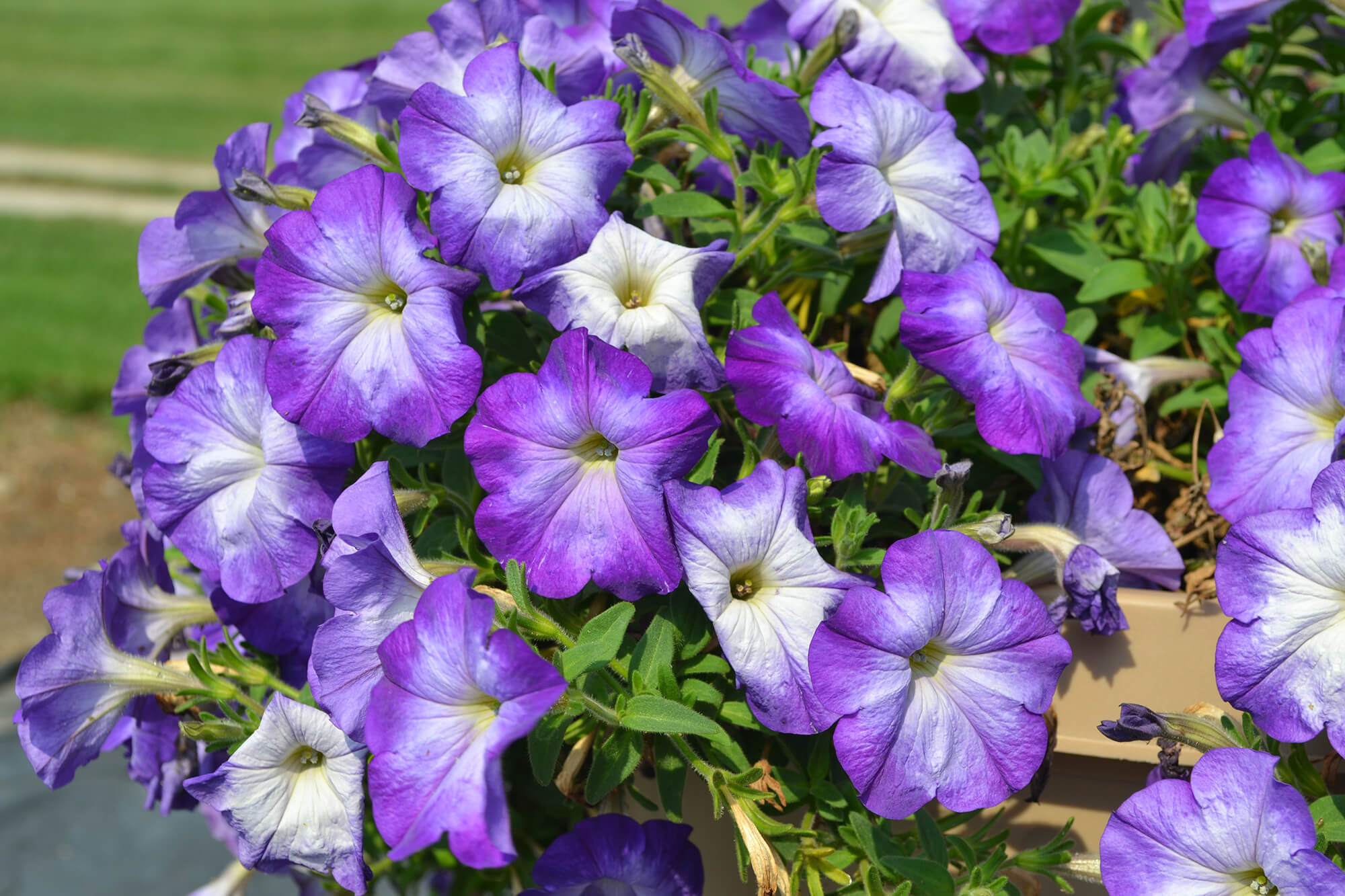 Flash Mob Bluerific was a favourite in the 2013 trial gardens.

Brilliant blue flowers with pale blue to white centres are the hallmark of Flash Mob Bluerific. The flower colour, coupled with a catchy cultivar name, were two characteristics that made this plant a favourite of the 2013 trial season. More importantly though, this plant grew well in containers and ground beds even during the extreme rainfalls early in the season.

Lavender is most often planted as a perennial or in herb gardens for its grey foliage and heat and drought tolerance. This past year Harmony, a cultivar of French lavender (Lavandula dentata) was entered into the bedding plant trial to be evaluated for container applications. Harmony produced very bushy upright plants reaching foliage heights of 45 cm, and when blooming, heights were 62 cm. The lavender-blue flowers are produced continuously throughout the summer. Deadheading can be done to improve the appearance, but isn’t necessary to encourage new bloom. It is unlikely that this cultivar will overwinter in our Ontario gardens.

It has been strongly argued that the marketplace does not need more Echinacea cultivars; a quick visit to the Royal Horticultural Society’s Plant Finder list found 168 cultivars. That argument may hold some weight if the consumer actually stops buying the new cultivars. Since the Trial Garden program is part of the marketing system, it receives its fair share of new Echinacea cultivars that appear to be appreciated by the visitors to the garden.

Case in point, in the 2013 trial, of the 10 or so new Echinacea entries that arrived here, the almost new series of Sombrero with the intense burnt red colour of Salsa Red and the varying coral shades of Hot Coral attracted all the attention. These two selections are also low growers with heights reaching only 30 to 50 cm in the first growing season. These plants are bushy, as well sending up multiple flowering stems from the crown. The winter hardiness of these selections still has to be tested at our trial sites, but the literature from the supplier is encouraging and indicates USDA hardiness to zone 4a.
Share
Tweet
Mail