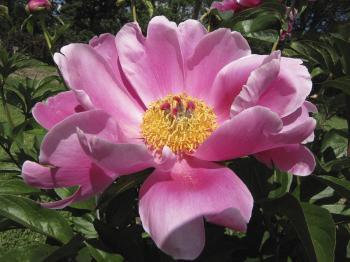 These six essential perennials are plants of size and substance. They will be the backbone of your perennial garden. With the wide choice of cultivars available in each of these six basic plants, any colour scheme is possible.

Your perennial garden could consist totally of these few basic perennials, but if space permits, it is so easy with the many hundreds of perennials available to fill in around them. Not only would this create an increasingly lush garden, you could begin the flower display earlier than the show of iris and peony, and extend it later in the fall.

Tall bearded iris
Unlike the common wild iris or flag that flourish in wet, swampy places, the tall bearded iris are dry-land plants that need a sunny location and well-drained soil. In planting, the rhizomes should be set just below the surface of the soil. The growing point is at one end of the rhizomes. To obtain a good size clump quickly, the rhizomes may be set together so that they radiate out from the centre. After flowering, the flower stems should be cut back but the leaves must be left to manufacture food for the plant until fall. Before the onset of winter the foliage should be cut back to within a few inches of the ground and all dead leaves removed. Since iris are very hardy, no winter mulch is necessary; it is best to keep them free of all material which might tend to hold moisture around the rhizomes and induce rotting.

Peonies
Peonies are long-lived plants that will continue to flower for generations. They need never be disturbed, although if moving them becomes necessary, the large clump should be reduced to sections with three to five "eyes." A large clump moved whole would most likely cease flowering. Plant peonies no more than two inches deep, with the roots' "eyes" into the soil. They will not flower if planted any deeper.

Daylilies — Hemerocallis hybrids
Daylilies are the heart of the mid-summer perennial garden. Daylilies flower non-stop through the heat of July and August (Stella d'Oro continues through September). They have a fabulous colour range — apricot, bronze, crimson, gold, lemon, mahogany, maroon, orange, pink, purple, red, violet and yellow. They are tough, hardy and reliable. Each lily-like flower lasts only a day but they are continuously in bloom over many weeks. The leaves look like arching, pointed straps. Daylilies are large, wide plants that need at least three feet of space.

Oriental poppies
Oriental poppies set the June garden afire with a blaze of colour. They need only well-drained soil in full sun or partial shade. To plant poppies, set the root straight down into a planting hole, deep enough that the crown is covered by at least three inches of soil. The plant foliage is downy with fine hairs. It appears prickly but is actually soft to the touch. After June's giant blooms have faded, the flowerheads should be removed and not allowed to form seed. The foliage then dies down and can leave a void in the border. Many gardeners plant daylilies or baby's breath nearby to fill the space. In September, the poppies will grow a new basal rosette of leaves. Mulch around the plant for winter protection, but do not cover the rosette.

Delphiniums
These stately and spectacular tall plants are essential to any perennial border. They need rich, well-drained soil; incorporate well-composted manure in the planting mix and add a mulch or top dressing of manure annually. Delphiniums are best planted in groups of perhaps three of a kind. By cutting out all but three of the best shoots at approximately 15 cm in height, these delphiniums will produce fatter, stronger and better flowers on the remaining spikes. Grown like this, the plants are strong enough not to require staking. However, unless planted in a spot protected from wind, staking will still be required if they are to be saved from high winds that accompany our all too frequent summer thunderstorms. Delphiniums exhibit a central bunch of petaloids, a flower within a flower, commonly referred to as a bee. The black bee in 'Black Knight' intensifies the already dark blue of the flower and makes it appear bluer. The white bee on the white 'Galahad' turns the flower into a double white. After the main flowering period has passed (in about mid-July), cut some stems to the first leaves and others right to the ground. The plant will then re-bloom in August and September. While flowering is not as spectacular as in June, it is still attractive and makes a welcome addition to the fall garden.

Tall phlox (Summer phlox)
Tall phlox are invaluable for continuing the summer-long display of colour in the perennial border. Use a lavish hand with these brilliant flowers, choose a few kinds and plant them in irregular drifts for a magnificent display. There are a variety of colours from which to choose, many with a contrasting eye. Choose from all the pink ranges (peach pink to salmon and rose), pure white to whites with a coloured eye, orange red to scarlet, and mauve to mulberry purple.

We want you to be successful with your garden!